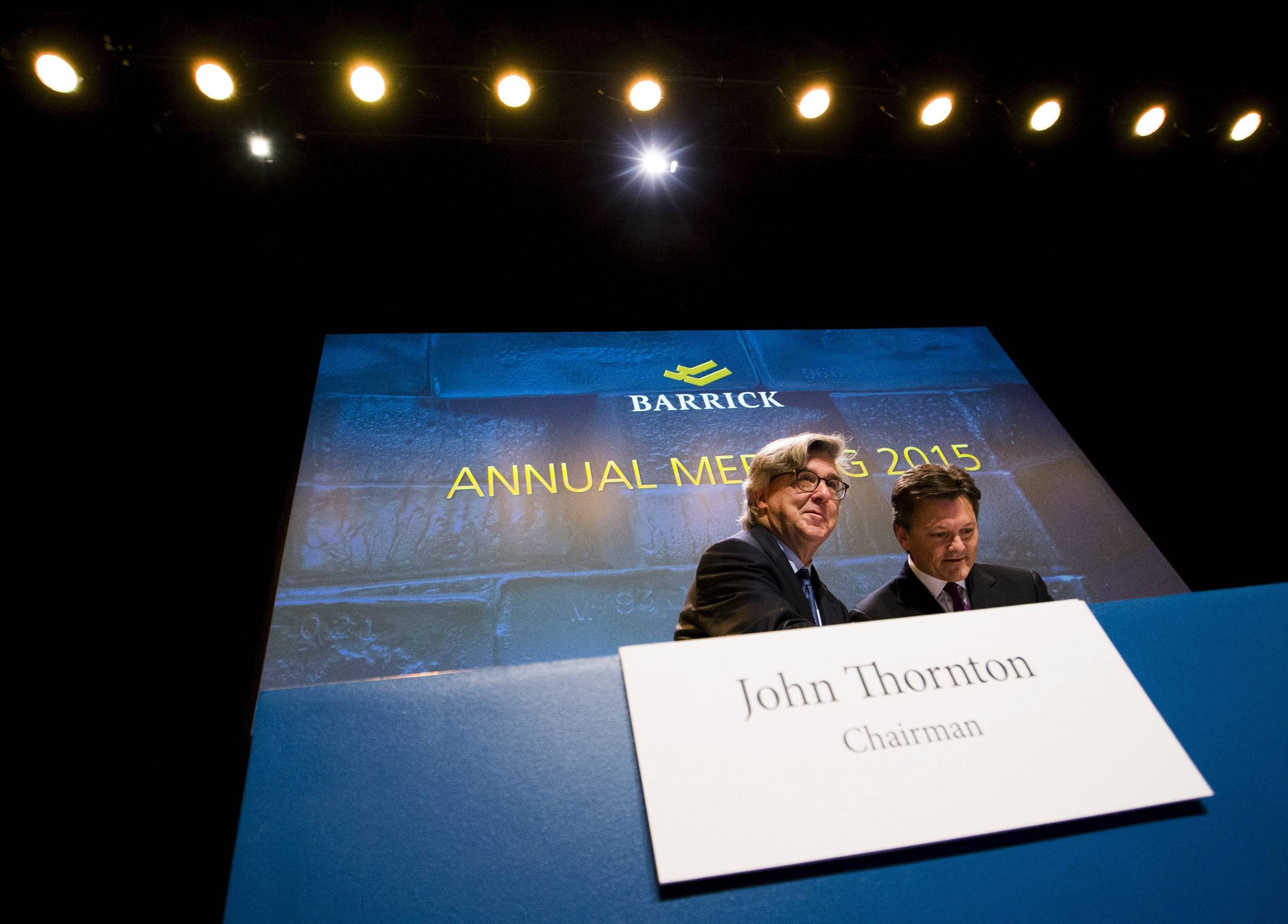 Barrick Gold Corp. has twice in the past three years lost a say-on-pay vote. (Mark Blinch/Reuters)

In bygone years, it might have slid by with little protest. But not in Canada’s new say-on-pay era.

Barrick Gold Corp. reported in March that it raised chairman John Thornton’s pay last year by 36 per cent to $12.6-million (U.S.) and exempted him from the defined performance targets it uses for other executives’ pay, all while Barrick lost $3-billion and saw its share price shed one-third of its value in 2014.

It was an incendiary combination and shareholders responded with an overwhelming “no” in the company’s say-on-pay vote on executive compensation, which garnered just 27-per-cent support at Barrick’s annual meeting in May. It is the lowest vote so far this year in Canada and the second time in three years Barrick lost a say-on-pay vote primarily over concerns about Mr. Thornton’s pay.

The vote outcome is extremely low for Canada, where companies in the S&P/TSX 60 index have averaged 90-per-cent support in their say-on-pay votes this year. But no one in Canada’s institutional shareholder community appears to have been very surprised.

As say-on-pay voting becomes more established in Canada, it is clear investors are taking a far tougher approach in targeted cases, using their new powers to protest unpopular voting practices. Clearer patterns are beginning to emerge about what is most likely to result in an overwhelmingly negative vote.

Major shareholders publish lengthy and influential proxy voting guidelines, but fund managers say they are most likely to vote “no” on a relatively short list of things that cover their biggest concerns: when executive pay doesn’t align with performance, when big discretionary payments or bonuses do not fit within the normal compensation plan features, and when there is a lack of response to prior low votes on pay. Mr. Thornton’s pay ticked most of the boxes.

For the Canada Pension Plan Investment Board, which is Canada’s largest fund manager with $265-billion (Canadian) in assets, issues that spark negative say-on-pay votes include excessive use of discretion – rather than concrete performance metrics – in setting pay, and a “disproportionate” focus on short-term results, said managing director Stephanie Leaist, who heads the fund’s sustainable investing division.

“We weigh each say-on-pay vote on a case-by-case basis, taking into consideration a variety of factors that include not only the structure of the compensation packages themselves, but also the company’s compensation history and its responsiveness to any shareholder concerns on the subject,” she said.

The OPTrust pension fund, which manages $16-billion in assets for Ontario government workers in the Ontario Public Service Employees Union, votes against companies’ pay plans in a small number of cases each year, chief executive officer Hugh O’Reilly says. However, OPTrust said it votes against companies such as Barrick when it has significant concerns, such as when there is high discretionary pay that is not matched by similarly strong performance.

“In the overwhelming number of cases, we are voting ‘yes,’” Mr. O’Reilly said. “We’re not there as a gadfly.… We’re picking our issues.”

While say-on-pay votes on average were down only slightly this year to 90 per cent from 91-per-cent support in 2014, the results were more extreme in 2015 as shareholders grew more militant in their opposition. Three companies had votes below 50-per-cent support this year – Barrick, Yamana Gold Inc. and Canadian Imperial Bank of Commerce. No one lost a say-on-pay vote last year.

The two lowest say-on-pay votes this year – at Barrick and Yamana – both involved gold miners that operate in a sector that has historically had high executive pay. Shareholders say they are concerned that CEO compensation at many gold companies has remained among the highest in Canada despite poor performance in a period of low gold prices.


A Web-based analysis tool developed by compensation consulting firm Global Governance Advisors to assess alignment between pay and performance shows five of the eight companies with the greatest mismatch of above-average pay and below-average performance over the past five years are in the gold sector.

Yamana garnered just 37-per-cent support on its say-on-pay vote this year after investors opposed a special $2.7-million cash bonus and an award of share units for CEO Peter Marrone for concluding a takeover of Osisko Mining Corp. A third gold miner, Agnico Eagle Mines Ltd., got 77-per-cent support this year in its say-on-pay vote, which is well below the Canadian average.

Catherine Jackson, senior adviser at giant Dutch pension fund PGGM, which manages about $250-billion in pension investments around the globe, said the fund is increasingly voting against pay plans at many companies, but especially when it does not believe they are sincerely trying to make significant reforms.

“We’re going to be focusing a lot on pay and the gold sector has a long way to go,” Ms. Jackson said.

PGGM recently unveiled stricter new voting guidelines, saying it will vote against “excessive” pay in extreme cases, and will oppose various specific practices, including all use of stock options in compensation plans, which the fund says add needless complexity to pay plans.

The fund holds shares in numerous Canadian companies – including all companies in the S&P/TSX 60 index – and already voted against compensation plans at most of Canada’s largest companies this year, in many cases because of its new stock option policy.

PGGM is going to phase in more of its new compensation guidelines in coming years because they are far ahead of current corporate practices, Ms. Jackson said, which means its voting criteria will grow tougher and more negative pay votes are likely going forward.

From cash to stocks, The Globe and Mail’s Janet McFarland shows us exactly what goes into a CEO’s salary in this country.


For example, the fund says pay plans have become far too convoluted,and it ideally wants companies to pay only fixed salaries to executives, except in cases when performance exceeds challenging targets and bonuses or shares can be awarded. Ms. Jackson said the fund is “looking for accountability” from boards, which have to make more tough decisions to rein in excessive pay.

“Basically we’re at this position because boards haven’t done their jobs,” she said. “So if they complain to us about having these very strict guidelines, we’ll point back at history and say, ‘Well, you did this, and you didn’t do this when you should have,’ so we’re going to have all this restrictive guidance.”

Say-on-pay votes are advisory only, and companies do not have to make changes even if the result is below 50 per cent. But the votes are seen as a major signal of opposition from shareholders and most companies make changes when the results are weak.

The votes are voluntary in Canada, however, and companies are not required to hold them. In the United States, by comparison, the votes became mandatory in 2011 and companies must have them at least every three years at a minimum. Other countries, such as Britain and Australia, also require say-on-pay votes.

Shareholder advocates say voluntary adoption is slowing down in Canada. Within the S&P/TSX 60 index, 78 per cent of companies now have say-on-pay votes. But in the broader S&P/TSX composite index, only 46 per cent of 247 companies have adopted say-on-pay votes, according to a 2014 review.

Peter Chapman, executive director of shareholder advocacy and advisory group Shareholder Association for Research and Education, says regulators need to step in and mandate say on pay in Canada to ensure all shareholders can signal their sentiments to all companies.

“At this stage there needs to be a level playing field across the market, and this needs to be picked up by the regulators at this point,” he said. “Like many new things, the early adopters are in, the governance leaders are in, but it’s not growing at the rate it was before.”

Source: Global Governance Advisors and The Globe and Mail

Naizam Kanji, deputy director of corporate finance at the Ontario Securities Commission, said the OSC has been reviewing say on pay but hasn’t decided yet whether to introduce regulation. The votes have led to good results, he added, by increasing investor engagement with boards and improving pay practices at many companies.

“We are looking at the adoption rate for say on pay and thinking about whether this is something we need to get involved in more,” he said.

Say-on-pay votes are often a late indicator of shareholder anger, coming many months after most pay decisions are made, says Ray Murrill, senior consultant at Toronto compensation consulting firm McDowall Associates. He said companies can also provide more information to shareholders at an earlier stage to prevent being taken by surprise by negative votes.

In the United States, companies are required to file 8-K public disclosure reports within four days of a board’s decision to make “any changes to the compensation of current high-level officers.” Mr. Murrill said the U.S. filings serve as an early-warning system to shareholders about major compensation decisions and provide an opportunity for companies to hear immediate feedback.

He said Canada should adopt a similar reporting rule because it would be preferable for companies such as CIBC, Barrick or Yamana to hear about concerns immediately than to be surprised with a negative say-on-pay vote many months later.

“You can imagine all that feedback that those three companies got on their proxy circulars, they would have had that within one hour,” he said. “Then they can say, ‘Oops, we goofed, and now we have a chance to modify it or explain it or do something before almost a year has gone by.’”

Mr. Kanji at the OSC said the U.S. compensation reporting rules are part of a much broader 8-K reporting regime that is structured differently in the United States than in Canada, so it would be complex for Canadian regulators to adopt just one reporting requirement about pay changes.

He said there is nothing stopping any company from immediately disclosing pay amendments to hear investor feedback.

“That’s something issuers themselves may want to consider as a best practice, because it does engage investors in advance,” he said.

If companies don’t seek out shareholders’ views, they may find they are increasingly being targeted by more co-ordinated action in reverse.

Ms. Jackson said PGGM plans to talk with other major investors in Europe and North America because reform will happen more quickly when big shareholders agree on reform principles. Talking to individual companies about reform “is such a long and arduous process,” she said, while co-ordinating with other investors can spur a broader change to fundamental pay structures.

“Really, it is incumbent on us as an investor community to come together on a set of principles we can agree on, even if we won’t agree on everything,” she said.

“We’re kind of done with being told by the company how it should work, when in fact it should be the other way around.”