Greg Malpass, 40, is the founder and chief executive officer of Traction on Demand, a Burnaby, B.C.-based cloud consulting and software-development firm. It works with Salesforce to provide a customer-relationship management platform that helps organizations consolidate information for easier access and co-ordination.

It's kind of a funny story. The physician that was supposed to deliver me was a no-show. My dad was a resident at the hospital [in New Westminster, B.C.] and he ended up delivering me.

I grew up in Nelson, B.C., as the second-oldest of four kids. It was a great town to grow up in. I did everything from rowing for the school, I swam competitively, spent a ton of time skiing. My parents gave us free reign. From the age of 13, we were able to do overnight hikes in the backcountry. I had lots of freedom.

All of us kids are entrepreneurs in some way. The credit goes to our parents. No matter what we thought we were capable of doing, they would always respond saying, 'That sounds great. I can't wait to see when you accomplish that.'

In Grade 10, three teachers colluded and decided they would allow me to go through an unstructured learning process. While most of my classmates were going to class, I was allowed to do self-directed studies. I think they saw me not engaging in class and thought I was capable of doing better than I was. I have always been reluctant to accept status quo. I always want to understand why.

In my first semester at Simon Fraser University, I ended up with a 1.54-grade point average. I had this notion that I wanted to be a doctor like my dad, but a sports-medicine doctor. My grades suggested that interest wasn't going to pan out.

Hitchhiking up the hill to school one day, I got picked up by the head of kinesiology. We started talking and I explained my situation. He said, 'Do you want to work in the clinic or run the clinic?' When he put it that way, I realized I'd wanted to run it.

I immediately went to the business faculty to declare my interest in pursuing a career in business. I didn't realize you needed about a 3.5-grade point average to get in. I made a deal with the dean – If I was nominated on the executive of three different business clubs, he would allow me to go to each professor, and they could choose if they would allow me to take their class. I negotiated to get into every business class in university.

I founded Traction on Demand in 2007. It was after having set up a software system that would track online sales leads. For four years, I hammered away on Salesforce. In January, 2010, I took on a huge contract from CanPages. That's when I brought on my first temporary contractor. We have more than 300 people working at Traction today.

We hire based on three main criteria: No. 1 is cultural fit. We used to say it's someone you'd like to have a beer with, but [now] we have a better term, which is someone you'd like to get to know better. If you don't pass that one, it's a no-go. The next one is intelligence. It's the ability to absorb and retain knowledge. The last one is skills. What we found is that if skills were put first, it would be a failure. You are getting someone for what they are, versus what they could become.

I'm very motivated to find systems and processes that can share the burden of decision making. This allows us to operate with agility and without hierarchy. I don't believe I'm smarter than the average person at Traction. I see my job as the protector. My title is actually enabler.

The whole journey has been super humbling. When I set out to start Traction, I didn't want to be part of a company anymore. Now, here I am.

France Margaret Bélanger: ‘I find it important to engage on a personal level’
April 16, 2017
Tony Stewart: ‘My friends are probably surprised I’m in the wine business’
April 9, 2017
Jim Jarrell: ‘It was hard to know if we were succeeding or failing early on’
April 2, 2017
Bruce Linton: ‘I’ve gone from high-tech to dot-com to infrastructure to cannabis’
March 26, 2017 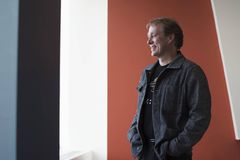 Sue Gardner: ‘Hubris is the engine of Silicon Valley’
March 19, 2017
Follow us on Twitter @globeandmail Opens in a new window
Report an error Editorial code of conduct
Due to technical reasons, we have temporarily removed commenting from our articles. We hope to have this fixed soon. Thank you for your patience. If you are looking to give feedback on our new site, please send it along to feedback@globeandmail.com. If you want to write a letter to the editor, please forward to letters@globeandmail.com.
Comments