What will you do if your employee returns from lunch smelling of marijuana? That's one of several issues companies may have to deal with once the federal government legalizes the use of cannabis later this year.

What is it about legalized marijuana that differs – or not – from other substances, such as alcohol, which are already prohibited from use at work?

A survey by the Human Resources Professional Association released in January found that 71 per cent of HR professionals believe their workplaces are not prepared to deal with the coming legalization of recreational marijuana, including issues related to impairment, usage on the premises and safety.

Daryl Cukierman, partner with Blake, Cassels & Graydon, notes that criminalization – something employers use as a reason for prohibiting marijuana in the workplace – will no longer be an appropriate objection.

"The legality argument will no longer be valid once the legislation comes into force, and when it comes time to determining disciplinary action regarding cannabis-related misbehaviour, employers will need to think about the appropriate form of discipline even more so," he explains.

And it is the proportionality of the discipline that will be difficult for employers to deal with initially. "Discharge may still be an appropriate response in certain situations but, much like other instances of workplace misconduct, the facts surrounding the marijuana use or possession will need to be assessed by the employer on a case-by-case basis," Mr. Cukierman says.

How will employers deal with the differences between types of impairment?

Currently, it is not okay for employees to show up to work drunk and the same, of course, is true of them showing up high. "With recreational use and termination – the tribunals, the arbitrators, the courts will look at it and say: 'How do we manage this relative to workplace policies?' And there will be more of those [cases] because employees that are disciplined or terminated will complain," says Lorenzo Lisi, practice group leader, labour and employment group, with Aird & Berlis.

He says that legalization does not undermine an employer's ability to make rules or policies that prohibit use on company property. The issue, Mr. Lisi adds, is whether impairment can be demonstrated in the same ways as someone who is under the influence of alcohol.

This remains a serious debate for employers as drug impairment can be more difficult to ascertain and tests have not reached the levels of accuracy that occur with alcohol testing.

Employers have to consider any loopholes that may exist in their current drug and alcohol policies. If, as Mr. Cukierman suggests, employees make an argument that marijuana is no longer illegal, companies will want to review and update current policies relating to possession and use of alcohol and drugs at work to ensure that marijuana remains a prohibited substance.

Another issue has to do with general practice or company culture. Mr. Lisi says there are companies that allow executives or others to have a drink at lunch during work hours. Does this imply vaping at lunch (even on an employee's own time) would be allowed as well? "It means," he says, "that companies may have to be smarter about how they treat any drug or alcohol, not just cannabis."

Ultimately, Mr. Lisi concludes, employers' policies going forward have to be consistent in their approach to alcohol and drugs on company property. The key in the future will be a no-exceptions policy with consistent enforcement leaving little room for loopholes or employee uncertainty. 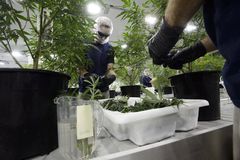