I was born in Moncton, my parents are from southwestern Nova Scotia. My grandfather had oxen and a cart and we'd go to the shoreline to get seaweed for the farm to spread on his vegetable garden as nutrients. I would help – kind of help. Seaweed helps all types of crops, particularly crops under stress. He knew things we've proven scientifically 50 years later. We have a dozen PhDs who can show you at molecular levels how it affects genes in plants, animals and humans. We were one of the pioneers on seaweed applications.

My parents are Acadian. I grew up basically anglophone, in Dartmouth. It didn't have French facilities then. I didn't have my French and regretted that. I went to Montreal, came back after six months speaking fairly fluently. I still remember my parents' reaction; they were so proud. I go to southwestern Nova Scotia and talk to people, see their pride in Acadian Seaplants. They're proud of my father; they're proud of me. It's not egotistical. It's about community, because Acadians had been pushed out.

When I chaired the Halifax 2011 Canada Winter Games, it was important to be bilingual. It pushed me because there's sports vocabulary [such as] "long track speed skating arena." My parents asked where I got the words I didn't know five minutes before I went on air.

I have a B.Sc from Dalhousie University and an industrial-engineering degree.

In 1981, my mother said I didn't have a bedroom [because] my father had started Acadian Seaplants and my bedroom was the office. I worked for Esso Petroleum Canada and slept on the couch before being transferred to industrial sales. Engineers don't want to do sales. Engineers want to do engineering. All my friends had gone west and I'm going to Newfoundland.

My father said to take the job. He was right, one of the best things I did. I wasn't used to dealing with people and it made me do that. I learned I enjoyed business.

I did my MBA at McGill University, home in summer. My father and I learned we could work together, a very important thing. In 1986, he asked if I wanted to see what we could build together, also something I never forgot: "If you can't do the job, I'll have to fire you. You'll always be my son and I'll always love you, but that's business, how it works." I became president in 2002, the year we built the Research Centre.

We export 95 per cent of our products to more than 80 countries, have 350 staff in eight countries, five major manufacturing facilities and 700 harvesters here, New Brunswick, Maine and Ireland. We invest heavily in research and development, international-market commercialization, sustainability and people.

Our two main divisions are plant health, human-and-animal wellness. On the human side, we grow seaweeds for the Japanese – 120 million people eat it at every meal. Go to a 7-Eleven in Japan, there's maybe 7,000 with our fresh seaweed [products] waiting for you to eat; every one sells something with our seaweed. Sold outside Japan? Nothing. I've seen our seaweed in Montreal. I put it in a napkin, rolled it up, put it in my pocket, took it home and sent it to our lab – it was ours. It went to Japan, then back.

I'm as certified as you can get to set fireworks in Canada. With my engineering background, I wanted to automate fireworks you buy at gas stations, to do a show at the cottage because my father likes fireworks. I bought this $50 toy; the next week it didn't work. I called the supplier for better gear, had to get my first licence to use ignitors. I went to London, Ont., for the course then apprenticed all over. My son was 14, my idea to do this together. He does the computer work, designs the shows. I do grunt work – haul stuff around. The biggest show we've done is Moncton, Canada Day.

I'm a skiing instructor for people with disabilities. I go to South America a lot. I spend too much time in Japan so when I try to speak Spanish, Japanese comes out. It's bizarre. I get in a Tokyo taxi, ask if he understands; 80 per cent of the time I get where I'm going.

Santa Ono: ‘The starting point has to be one of humility and respect’
February 5, 2017 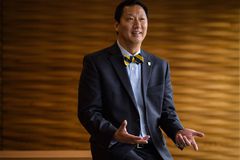 Juliette Brun: ‘Restaurants can be tough. It’s all the time, holidays, nights, days and weekends’
January 30, 2017
David Labistour: ‘Until this job, I’ve never aligned my passion with my work’
January 23, 2017 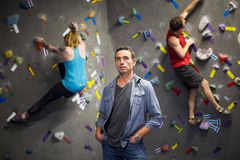 Larry Gibson: ‘Now I help solve problems on a much larger scale’
January 16, 2017
Asheesh Advani: ‘Anybody can be an entrepreneur’
January 9, 2017 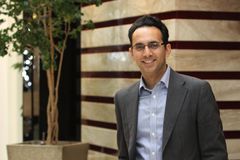