Sue Gardner, 49, is the former head of the Wikimedia Foundation and of CBC.ca. Presently based in San Francisco, she is an adviser and consultant specializing in digital rights and access to information.

That was very good timing for that "13 Canadians we want back" article [in The Globe and Mail] because every Canadian I know is considering whether to go back. It should be a bonanza for tech companies especially.

There's a ton of things I miss about Canada. Every time I go back, I'm struck by how comfortably prosperous it appears. I live in San Francisco, where visible poverty and degradation is enormously depressing. I ask myself every day how a part of the world with the highest density of millionaires in the United States, I'm guessing, is like this. I'm vulnerable to rose-coloured glasses; relative to the United States, it looks like a wonderland.

I was born in Barbados. I was one [year old] when we moved to Port Hope, Ont. My parents' iconoclastic streaks were part of my upbringing; my dad an Anglican priest, mom a public-school principal. They taught us to live our own lives and do what we thought was right, not fall in line with what others were doing.

I went into journalism to make information available so people could make the best possible decisions of how they want to live their lives. I was at CBC for 17 years [also leading] CBC.ca. I built the staff from 35 to 160. A piece of why I left was that journalists were starting to get disintermediated; everybody had access to a printing press.

I wanted to fix up the organization behind Wikipedia so it could be long term, sustainable and strong. Wikipedia had passed The New York Times and CNN in popularity, outstripping Wikimedia Foundation's ability to support it. It was in a Florida strip mall; I moved it to California, built [the] staff from eight to 200. Hundreds of millions of people were reading Wikipedia and new technology made it possible. We created the platform, space and tools – and got out of the way.

The first four months here, I went to major fundraising meetings and there was never another woman – I asked myself is this 1922? It's hard when you're in the middle of whatever you're doing to get a sense of big shifts. Around 2010, I started to feel increasingly uncomfortable with what we were building. And it was becoming clear that targeted advertising was going to be pretty much the only business model that powered the industry.

I left in 2014. I will always love it, but was beginning to feel I was at a luau on some fabulous tropical island, meanwhile there are storm clouds and volcanoes erupting – but you're having a good time. Wikipedia was a huge outlier; I felt proud of how great it was. We were acting ethically and had this great model where users pay, but it was becoming clearer the spirit in which we were engaging, of generosity and information sharing and love, was not broadly held. I needed to grapple with the big questions I'd been able to sidestep.

Hubris is the engine of Silicon Valley. I'm allergic to hubris. In the "move fast and break things" model, very few were giving thought to the downsides of the world we were building, implications for people's privacy and security, what could be done with data, discrimination. I think about how Donald Trump got elected – still something I can barely say – how many things had to break and fail.

A big contributing factor was social networks; they enabled alt-right people to gather and grow, and enable ongoing harassment of women and silencing minority voices. Business models created made it profitable to make up lies and spread misinformation [such as] by Macedonian teenagers … Silicon Valley never promised public service positive outcomes. It broke our hearts because we saw what Hillary Clinton faced, the misogyny and undermining. She was probably the most qualified person ever to run and lost to the least qualified ever. It's double standards.

Michael Duck: ‘Everybody has their own freaky quality’
March 12, 2017
Janet De Silva: ‘One thing that has enabled me to succeed in business is not pretending I’m the expert’
March 5, 2017 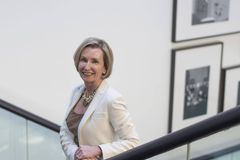 Allana Williams: ‘The culture is all about striving to be the best’
February 27, 2017
Pam August: ‘To be successful you have to be able to form strong relationships’
February 20, 2017
Jean-Paul Deveau: ‘Engineers want to do engineering’
February 13, 2017
Follow us on Twitter @globeandmail Opens in a new window
Report an error Editorial code of conduct
Due to technical reasons, we have temporarily removed commenting from our articles. We hope to have this fixed soon. Thank you for your patience. If you are looking to give feedback on our new site, please send it along to feedback@globeandmail.com. If you want to write a letter to the editor, please forward to letters@globeandmail.com.
Comments