Like many in the province who eventually make their way to Calgary, Byron Osing grew up on a farm in a small town in Southern Alberta.

In Milk River, home to 1,000 people, Writing-on-Stone Provincial Park and the Coutts border crossing located 10 minutes away (the only reason anyone ever passes through, he says wryly), this son of a grain farmer became motivated to do something with his life that didn't involve farming.

But he still wanted to follow in his father's footsteps as an entrepreneur who took considerable risks and started with nothing. "I wanted nothing else in life but to do that," says Dr. Osing, the chief executive officer and chairman of technology firm Calgary Scientific, the latest in a long line of companies of which he's been at the helm.

A fearless attitude is simply something he was born with, he says. "When playing hockey, I was always the goalie. I often got asked, how can you not be afraid of getting hit by the puck?

"Entrepreneurship, especially in the tech sector, means living with that combination of adrenalin, fear and anxiety all the time. When you're running fast and hard and outsmarting the biggest companies in the world with billions in capital, it's important to have the right personality."

Dr. Osing started his first three significant companies in the 1990s while writing his PhD dissertation, including two business centres and a software firm, Telebackup Systems Inc., that became one of the biggest success stories of its time.

"We took some government loans against a piece of farmland, rolled the dice and risked everything we had," he recalls.

"Back then home offices were new and people weren't backing up their data. None of the big guys had figured out how to back up systems effectively over tiny bandwidths, or to do a full system recovery if a computer was lost or stolen.

"We were acquired by Veritas software in a three-way amalgamation in 1999. The initial deal was priced at $200-million but by the time the SEC [U.S. Securities and Exchange Commission] and the U.S. cleared it, the value of the transaction tripled to $600-million.

"I started that company with one employee, one developer and capital from friends and family."

Dr. Osing was also the co-founder and CEO of cable installer Launchworks/180 Connect, later acquired by DirecTV. At Calgary Scientific, he oversees the creation of technology that makes software applications previously limited to desktop use compatible with any cloud or mobile device.

One example is ResolutionMD, a system that enables doctors worldwide to securely view patient images and reports from a variety of mobile devices, collaborate with other practitioners and diagnose from any location.

"In the area of acute care, time sensitive cases like diagnosing a stroke and administering treatment is problematic in smaller towns where specialists may not be readily available," he says.

"Four out of five strokes are caused by a blockage, but 20 per cent might be due to a leakage of the artery. If you administer a clot busting agent when it's a leakage, the patient will die. If you are able to safely administer this drug within two to three hours of onset of the stroke, the patient will likely have a fast, full recovery. Every 15 minutes beyond that golden window, your brain cell loss doubles.

"The timing of diagnosis is critical."

Dr. Osing has a long track record of recognizing and seizing opportunities; while attending the University of Lethbridge , where he earned a degree in psychology, he started a business selling roses in nightclubs three nights a week.

He was the first to do this in Alberta.

"I scraped together all the money I could get to buy wholesale flowers and cold storage, and hire some girls, and the next thing you know, we were selling 500 roses a week," says Dr. Osing, who went on to complete an MBA and then a doctorate in entrepreneurship from the University of Calgary.

"While the amount of work that goes into a doctorate is phenomenal, I'm glad I did it as I always had in the back of my mind that if I would be a successful entrepreneur I needed to know as much as possible.

"I didn't have access to capital. I was just a poor farm boy from Southern Alberta who wanted to be an entrepreneur."

It was during his time on the farm that Dr. Osing also developed an appreciation for purebred dogs that has since turned into a 22-year hobby of ownership, breeding and championship showing – a passion he shares with his wife.

"My parents loved purebreds and always had these big, white Samoyed dogs on the farm," he says.

"The very first dog my wife and I had together was a Rottweiler. His name was Panzer; he was such a great dog that we decided to get him a girlfriend, which we got from a well-known breeder in Saskatchewan under the condition that we had to show her to a championship dog show. We agreed, and that was our introduction into this whole world."

Over the years, Dr. Osing and his wife, Betty, have owned show dogs which have become Canadian Kennel Club and American Kennel Club champions. They share a particular appreciation for the Cane Corso, an extremely rare breed of Italian Mastiff farm dog that almost went extinct after the Second World War and became revived through a recovery program in the 1970s.

"We got our first show dog, Roscoe, out of the East Coast of the U.S., who went on to become a grand champion.

"From that point on we really started to focus on showing and breeding them. We don't breed a lot – we have six dogs who live with us, including two show dogs. There's a litter every two years and we get 500 applications for puppies. Our show dogs live with other people who give us the right to show and breed it if we so choose."

Dr. Osing and his wife co-own about 10 show dogs in addition to the ones at home – all are considered family members.

"Everyone has to have a hobby. We don't golf together, so we decided we can do this passionately in our old age. Those six hairy kids at home are our children." How Stingray’s thrill-seeking CEO took his passion public
May 15, 2018 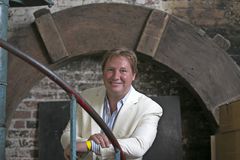 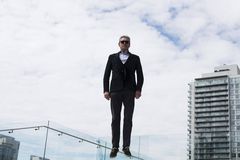