Harvey Schachter
Special to The Globe and Mail
Published November 8, 2015 Updated May 16, 2018

Why should I choose you?

That's a question consumers ask of companies. It's also a question that employees and prospective employees ask, along with potential board members, bankers, strategic partners, suppliers and investors.

It's therefore a query that Toronto-based consultants Ian Chamandy and Ken Aber believe you should put front and centre in your strategic planning, and their experience has revealed the most effective answers will be punchy – seven words or fewer.

When starting their consultancy a decade ago, they shared a frustration with how strategy was usually developed: A two-day weekend retreat at which a bundle of officials gathered, developed a plan, announced it on Monday and then along with everybody else forgot it by Thursday.

By contrast, they limit their sessions to four people, one of whom must be the chief executive officer. "These executives already have all the answers. We have a process that teases the answers out of them," Mr. Chamandy said in an interview. Instead of a weekend, they host a series of six half-day sessions over a few weeks to blueprint the strategy.

Most strategic planning essentially focuses on two questions: "Where are you going?" and "How will you get there?" But they feel those two questions, while legitimate, need to be preceded by another query: "Who are you?" Solve that and the answers to the other two questions become self-evident. "It's like the veil lifts and the fog clears, and for the first time you understand what business you're in and its full value to your clients," they write in their book Why Should I Choose You?

They warn about a "five-degree rule." If you're off by five degrees starting a trip, you will be out by 45 degrees a couple of miles down the road. The same applies to your shots in golf, you may have noticed. So before you set out strategically, you must know exactly where you are heading to avoid ending up off kilter.

"Why should I choose you?" substitutes effectively for the "Who are you?" probe, they found. The answer is not just about marketing, but about every aspect of your business. The seven words (or fewer) articulate your corporate DNA. Like a human's DNA, it should determine everything about the organization.

A retail shelving company with which they worked chose "Opening sooner" as their essence, reflecting that at their best, they helped the stores to open on time rather than late, as too often happens in construction. The CEO told the consultants he wasn't quite sure what business he was in. Now he and his staff knew they were in the business of helping clients open sooner. For clients, price and quality used to be the differentiators. But at the heart, they were worried about their construction projects finishing on time. The two-word focus reminded them of – and addressed – that potential headache.

The strategic team is kept to four people, as any more proves unwieldy. To ease tensions, they are called the "draft team" and their ideas are then taken to the full executive group for consideration and then the wider organization. Ideally, a company commits to spending a year to five years implementing the strategy, which is intended to be transformational.

If the question "Why should I choose you?" catches your fancy and you want to tackle it, Mr. Chamandy has a warning. Ultimately you are undertaking corporate therapy, digging deep into the organizational psyche. Just as you wouldn't do therapy on yourself, you may want professional help.

The seven-word (or fewer) statement is considered your core proposition and you must determine what it means logically. The next step is to assess whether you are qualified to do what you are saying.

That leads to figuring out what your methodology is for implementing the core proposition – how you can deliver on the promise and be believable to those who hear that pledge. That essentially means determining your business architecture, the structure and policies for implementing it.

At this stage, they want you to ponder the core beliefs that can sustain this effort. The consultants dismiss mission, vision and values statements as all sounding the same, with vague words that don't help staff to act since they don't differentiate your organization from any other. Often the values are ones anybody anywhere would subscribe to. "Core beliefs are more tangible. They become the guiding principles for your company," Mr. Chamandy said.

The beliefs indicate the kinds of behaviour that will flow from it. Emeritus Financial Strategies settled on the following core belief after the founder became fed up with companies providing advice that maximized profit: "The development of an effective financial strategy must be totally independent of the profitability of the products that are part of the plan."

The final step is to explain to your customers "What's in it for me?" if they choose you. What do they get?

In many ways, implementation of the answer echoes other strategic planning approaches. But the beginning is different: One question, with a seven-word (or fewer) answer that you may want to try.

Be strategic when developing your top talent
May 16, 2018 How to keep your ego in check so you can keep developing
March 22, 2018 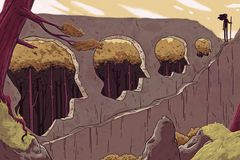