In spy thrillers on television, the characters always seem to be young and beautiful or handsome. But in the real world of security intelligence, age has the edge, says Mark Cosenzo.

"We may be beautiful or handsome, but we don't look that young," jokes Mr. Cosenzo, 53, assistant director for human resources for the Canadian Security Intelligence Services, or CSIS, an Ottawa-based federal agency dedicated to national security. "You have to have experience. In the real espionage industry, it can be a life-or-death thing when you have to make the call."

As one of the Top Employers for Canadians Over 40, CSIS actively recruits older workers. The agency also hires young people, but it especially values candidates with established skill sets and life experience. More than half of the organization's work force is older than 40.

"We recruit experience as much as we possibly can," says Mr. Cosenzo. "Age doesn't really matter. We can train people, but when we bring in the experienced types, they tend to hit the ground running."

Mr. Cosenzo believes that part of CSIS's appeal is what he calls "the mission." It's why so many older people from all walks of life apply to the agency.

"When people reach 40, they often reassess their lives and want to make some sort of contribution back," he says. "The service carries out a fairly unique set of responsibilities, mainly investigating spies and terrorists and contributing to national security. We have traditional positions that you find in other companies, but we have a whole whack of people who are either dedicated to working on investigations or supporting those investigations of terrorism and espionage. People feel like they're really contributing, and they are."

Age 40 is often a career crisis point, when professionals re-evaluate their careers and personal lives, says Alan Kearns, founder of Career Joy, a national career coaching firm. It's the age when people most often seek him out for help.

"Employees over 40 often reach a frustrated plateau in their careers and wonder what's next," says Mr. Kearns. "They may question the work they're doing and want a change. It's a complex time. There may be disappointment or disillusionment, personal issues such as divorce, or a disease like cancer to complicate life. There are a lot of changes for many people as they grow older that pull them in different directions."

Older workers are also particularly vulnerable now that globalization has made work more competitive, Mr. Kearns says. Forty-somethings increasingly need to justify their roles as productive ones. So, at the same time they are feeling stressed by other factors, they need to be seen as high performing professionals engaged in what they're doing.

"A lot of people over 40 haven't had to do that until now," says Mr. Kearns. "They graduated from university and walked into their first job without feeling they had to bother with visibility. Now they need to position themselves properly and manage their personal brand."

Often when older people leave jobs, or are forced to change, they discover more rewarding careers elsewhere. Mr. Kearns calls it "being disruptive in a constructive way." Another realistic option for employees is moving laterally within their company, by taking a different job or going to a new location.

Some turn to self employment to gain control and choose to start a consulting business, Mr. Kearns says.

But others find that being stuck in mid-management at 40 or older isn't necessarily a bad thing.

"A lot of people come to terms with their career aspirations and aren't interested in shooting for the big job with its 80-hour week and other demands," says Mr. Kearns. "It may even be their sweet spot."

With the draw of "the mission" at CSIS and perks that cater to older workers - such as pre-retirement leave, a fitness centre, extended health care and a defined-benefit pension plan for when employees are ready to come in out of the cold (average retirement is 57) - people tend to stay around. The attrition rate by resignation is less than one per cent.

WHAT MATTERS MOST TO OLDER EMPLOYEES

The stability and type of pension are key as baby boomers exit the work force, says Richard Yerema, managing editor of Canada's Top 100 Employers. Many private sector employers have moved to defined-contribution plans, which put a much heavier onus on employees to provide for their own retirements. Traditional defined-benefit plans are still found in the public sector and among larger private-sector employers, though many are limiting enrolment to older employees.

"We talk a lot about millennials [the generation born between 1982 and 2000] but we need to respect and communicate with all levels and ages," says Mark Cosenzo, assistant director for human resources for CSIS. "We are way more consultive now than we were five or 10 years ago."

"You lose people in life," says Mr. Cosenzo. "Whenever we lose someone at CSIS, we put up a little memorial on the front of the building. That kind of thing goes a long way with me as I get older." 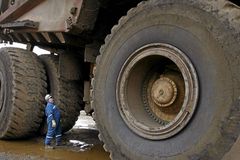