From mentoring groups to building schools, these award recipients seek to further understanding and education. Follow the links below to read profiles about more winners.

Youth in Motion ( www.youth-in-motion.ca) is the non-profit organization that runs the Top 20 Under 20 awards program. A national panel selects the winners. Their ages are listed as what they were on Dec. 31, 2010.

Ivneet Bains's parents immigrated from India to Canada in 2007 to help their only child improve his possibilities, but the road to scoring perfect marks in high school in Surrey, B.C., while inspiring other students was bumpy at first - including being bullied for his accent.

Today, the Bachelor of Commerce major at UBC's Sauder School of Business is reaching hundreds of students through Math4Me, an innovative tutoring and mentoring program that began in Surrey and is expanding to Vancouver this fall.

Aided by about ten other university or high school students who act as mentors, and with the help of community leaders who serve as guest speakers, Mr. Bains says Math4Me helps Grade 3 to 12 students improve their math, science and English skills, and links them with volunteer work to better themselves and the world.

"We try to inspire students and help them boost their self-esteem from every single perspective that we can … to give them that ah-ha moment about what they want to be in their life and … help them contribute to global issues," says Mr. Bains, who founded Math4Me after tutoring students for three years.

Although in Grade 12 he earned 100 per cent in math, calculus, physics, biology and chemistry, and in 2009 received the Governor General's Academic Medal for Excellence, he's most proud of his 90 per cent in the English provincial exam. His academic and volunteer prowess earned him scholarships from UBC and various organizations that will more than cover his university education.

Despite his busy life, and commuting an hour-and-a-half each way from Surrey to UBC in Vancouver, Mr. Bains sees no end to his work as a "social entrepreneur." After university graduation in 2013 and possibly earning an MBA, he hopes to focus on philanthropic work, and integrate Math4Me with his passion for finance and economics.

At Christmas in 2009, Rita-Clare LeBlanc opened an envelope from her uncle and aunt and discovered they'd given her $77.12. Their expectation? Take the money and do some good.

Since founding MYST, or Maritime Youth Standing Together, the 16-year-old has gone on to inspire 30 other young people to raise more than $13,500. In one case, they gathered kids into the local church hall, spent the day playing games and doing crafts, and charged the parents $25 a child. A youth charity concert brought in another $4,000.

Working with African Sky, a non-profit organization in Ohio, the money will go toward building a school in Mali, Africa.

Although the Halifax West High School student says simply knowing she's helping kids get an education is reward enough, others are giving her kudos. African Sky awarded her a philanthropy award, which made her an honorary Mali village leader. She was also invited to meet Queen Elizabeth last summer in Halifax.

MYST is now raising money for backpacks for Mali students and Rita-Clare hopes to visit the completed school with other volunteers after she graduates next year. While she originally planned to go into medicine, the new goal is to study international development and communication in university.

"It's neat to see how the future can be re-shaped and changed by a single Christmas gift," she says.

While some bemoan the lack of civic engagement among youth, Adam Moscoe is working toward bringing out the best in young people.

Among the projects he has taken on is co-organizing TEDxYouthOttawa, the first TEDx conference organized by youth for youth, which gave a platform to young people in the area to share their ideas.

"It was very clear to us that young people HAVE novel ideas for addressing the most critical issues of our day," he says.

Another project is to engage young people with developmental disabilities in musical theatre, developing their confidence and social skills.

Through the Canadian Federation of Jewish Students, Mr. Moscoe co-ordinates a Holocaust and genocide awareness month, allowing youth to advocate for global action to prevent genocide. He is working to build bridges between Christian, Jewish, and Muslim students.

Other initiatives include organizing the Spirit of the Capital Youth Awards to recognize Ottawa's young innovators and humanitarians; creating Towards 2020: Canada's Commitment to Children and Youth, which gave a platform for ideas on education, health, technology and sustainability; initiating Ottawa Kindness Week programs and leading the FUSE mentorship program in schools, which promotes community involvement and combats bullying and hazing.

He has led fundraising campaigns for Save a Child's Heart, the Kiva microfinancing organization, Free the Children, and the Guatemala Stove Project.

As he pursues his studies in clinical psychology at the University of Ottawa, Mr. Moscoe hopes to enter politics and become a member of parliament one day.

Most suburban teenagers who visit downtown Toronto give the city's homeless little more than a passing glance - but not Madison Schill.

The Grade 12 student from O'Neill Collegiate Vocational Institute in Oshawa, Ont., was so affected by the sheer number of homeless youth in the city's downtown core on a visit last year that she decided to take action to raise awareness and combat poverty in her hometown.

"I realized there were a lot of people living like that everywhere," she recalls. "In Oshawa, you don't see that a lot, especially coming from a sheltered community like O'Neill."

To achieve her goal, Ms. Schill organized One Night Out, an all-night event held last November, during which 40 students visited local homeless shelters, a soup kitchen and a rehab centre, then slept in a no-frills setting in O'Neill's gymnasium. They woke to a spartan meal similar to ones served in shelters.

"I wanted to show kids that not everyone that's homeless is a bad person, that we can help them and make their lives better," she explains.

The event raised $700 for Oshawa's Youth Refuge, while also attracting clothing donations for the shelter's residents.

One Night Out took Ms. Schill months to organize, time she has precious little of. That's because when the former competitive dancer isn't studying or watching CNBC - she plans to study commerce at the University of Toronto or University of Western Ontario later this year or next - she's busy cultivating her burgeoning international modelling career.

The teen plans to spend the summer working the runways of New York, Paris and Milan, and will soon grace the covers of premiere fashion publications such as Elle Canada. She may defer her university studies for one year if her modelling career continues to gain momentum, but plans to still help with next year's One Night Out event at her high school.

When it came time for Corey Sherwood to make the decision about whether to go to university or college, where he wanted to go, what he wanted to do ... "It was probably one of the most stressful decisions of my life," he says.

Keeping his experiences in mind, he wanted to help others going through the same thing. So he founded Student 2 Future, a student-to-student mentorship program.

Originally, the focus was to help motivate at-risk youth consider a university education, but the program is now available to all students.

"I and the people helping me with this project grew up in a very bad neighbourhood and there were a lot of at-risk youth, but we realized this would be useful to all high-school students," he says.

The program works as an online platform, where volunteer mentors in Canada, the United States, Australia and Britain are available to chat with high-school students online about questions, such as tuition costs, program details, and so on.

Mr. Sherwood says there are currently 240 mentors signed up, including at prestigious schools such as Harvard and Princeton. The mentors receive a mentor's certificate.

Mr. Sherwood, who would like to get an MBA and become an entrepreneur, co-owns Student 2 Future with three other university students. He is in charge of marketing functions, such as going into high schools and doing presentations.

He would like to apply business principles to humanitarian ventures, such as the fundraising he did for victims of the Haitian earthquake and leadership workshops he conducted for at-risk youth with the Future Aces foundation. 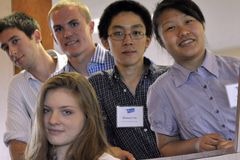 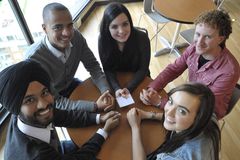 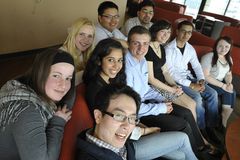