Mark Carney is urging prudence among Canadians who are borrowing at super-cheap rates today but may not be able to afford higher payments tomorrow.

Household debt is now the biggest risk to the financial system, even if it is not expected to climb to levels that could cripple bank balance sheets, the central bank said Thursday in its review of the financial system. It used a "stress test'' to show that rising interest rates between mid-2010 and mid-2012 would saddle a growing number of Canadians with unmanageable debt loads.

Mr. Carney, the Bank of Canada governor, who has guided monetary policy throughout the crisis, is relying on consumers to help drive a recovery juiced by his historically low interest rates. Yet he is also warning borrowers and lenders not to go overboard and to think about the consequences of hefty debt in an inevitable environment of rising rates.

The semi-annual report marked the first time the bank has analyzed the risks based on interest rates reaching specific levels.

"Households need to assess their ability to service these debt obligations over their entire maturity, taking into account likely changes in both income and interest rates,'' the bank said. "Financial institutions need to carefully consider the aggregate risk to their entire portfolio of household exposures when evaluating even an insured mortgage, since a household defaulting on an insured mortgage would likely be unable to meet its other debt obligations.''

The warning, Mr. Carney's most detailed to date, highlights the delicate position of the 44-year-old central bank chief. With overall inflation forecast to remain low, and the economy still struggling to regain its feet, Mr. Carney has pledged to keep his benchmark rate at just 0.25 per cent until mid-2010. So there's little he can do to temper demand in sectors such as housing, where low mortgage rates have spurred buying.

Central bankers around the world will be trying to find the right moment, and the right pace, to unwind the historic monetary stimulus they undertook to fight the global downturn.

Benjamin Tal, a senior economist at CIBC World Markets and author of a recent report showing that Canadians added $44-billion to their total debt in the first half of the year, said the growth in household debt is a sign of how "efficiently" the central bank's monetary policy has worked.

The Bank of Canada's concern, Mr. Tal said in an interview, "is not up to now, their concern is the next 12 months,'' should low borrowing costs attract another wave of buyers who are overstretched.

"That's why it's really important to basically remind the market that those interest rates will not remain at this rate forever."

Mr. Carney's report also warned that the increase in global stock prices over the past few months, which economists say helped raise consumer confidence as much as incentives to reinvigorate the housing market, may be overdone should corporate earnings not match expectations. Should investments shrink, it would be even harder for some homeowners to pay down debt.

Cheap mortgage rates, and fiscal incentives such as allowing first-time home buyers to use more of their registered retirement savings as a down payment, have fuelled a buying spree.

Existing home sales in October were 74 per cent higher than a bottom reached in January, while home prices were up 21 per cent from a year earlier. And BMO Nesbitt Burns said yesterday that November sales in Canada's seven biggest cities indicate a gain of 90 per cent from last year, led by Vancouver and Toronto.

Mr. Carney and his deputies have not raised the spectre of a bubble in the housing market. In fact, in late October he told lawmakers in Ottawa that he attributes much of the jump in home purchases to Canadians who had delayed plans to buy during the darkest days of the recession.

For the time being, reminding Canadians to be "prudent" may be all Mr. Carney can do. Raising interest rates sooner than the middle of next year might cool the housing sector, but could carry the cost of sending the strong Canadian dollar even higher, causing more problems for the country's exporters.

Eric Lascelles, a top strategist at TD Securities, said the central bank's warning is more likely to be addressed through regulations, such as increasing the minimum down payment or shortening the maximum acceptable term, steps taken just last year by the Harper government.

Finance Minister Jim Flaherty told reporters Thursday that the government is "watching and monitoring'' and would consider tightening rules if necessary, but currently has no plans to do so.

"People have to make sure that the mortgages they take out today either have a fixed rate or that they'll be able to handle increases in that mortgage rate later on,'' he said. "That's just prudent household management.''

The central bank said in its report that household debt will be "a key vulnerability over time,'' and in the stress test model assumed that the ratio of debt to income would rise from 1.42, or 142 per cent, in the second quarter of this year to 1.60, or 160 per cent, by mid-2012.

"Although Canadian household debt as a share of personal disposable income is lower than in the United States and the United Kingdom, its upward trend implies that households have a growing vulnerability to additional adverse shocks,'' the bank said.

At the same time, low interest rates have helped Canadians cut the amount of income that they need to devote to servicing debt, the bank said.

The proportion of households with debt-service ratios above 40 per cent of income, would rise to 8.5 per cent by the second quarter of 2012 assuming the central bank's key rate is 3.2 per cent, the Bank of Canada said. The share would increase to 9.6 per cent with a benchmark rate of 4.5 per cent. That compares to 6.1 per cent over the past decade and a peak of 7.4 per cent in 2000.

That said, the central bank said Canadian banks currently have more than enough capital on hand to absorb potential losses, suggesting that even the worst-case scenario in the stress test would fall short of risking a collapse of the financial system.

In its last review published in June, policy makers used a model based on a more severe recession and a resulting increase in unemployment.

With files from Bill Curry and Kevin Carmichael in Ottawa 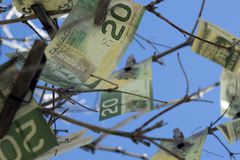 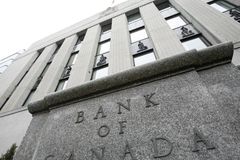 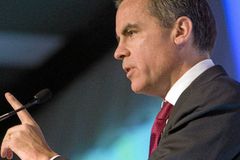