Catalyst, a Toronto-based firm that manages distressed-debt funds, wants a new trial of its lawsuit against its former analyst Brandon Moyse and West Face, which hired Mr. Moyse in 2014.

Lawyers for Catalyst argued that the original trial judge, Justice Frank Newbould, applied a higher level of scrutiny to Catalyst's witnesses than to West Face's and dismissed evidence that favoured Catalyst.

The feud broke out in May, 2014, when Mr. Moyse left Catalyst to work for West Face. Catalyst alleges that Mr. Moyse provided its rival with confidential information on a potential Catalyst investment in Wind Mobile Corp., then scrubbed his BlackBerry and computer to destroy the evidence.

Catalyst tried to acquire Wind but West Face – as part of a consortium of investors – ultimately won the company in September, 2014, and subsequently sold it to Shaw Communications Inc. for a significant profit.

Justice Newbould of the Ontario Superior Court threw out Catalyst's lawsuit "in its entirety" in August, 2016. He said he had found no evidence of wrongdoing on the part of Mr. Moyse and West Face and raised issues with the reliability of Catalyst founder and managing partner Newton Glassman as a witness.

"He was aggressive, argumentative, refused to make concessions that should have been made and contradicted his own statements made contemporaneously in e-mails," the judge wrote of Mr. Glassman in the 2016 ruling.

Mr. Moyse admitted in court that he had cleaned up his computer prior to turning it over to lawyers, but only to get rid of browsing history on adult-entertainment websites.

Justice David Doherty, the judge presiding over the hearing, challenged the idea that knowledge of Catalyst's bid was of any value to the competition. Justice Doherty said he couldn't see how the information from Catalyst had anything to do with the route that was ultimately taken by the consortium that ended up purchasing Wind.

"To me, it's like two ships passing in the night," Justice Doherty said.

The hearing will continue on Wednesday, when West Face's lawyers are expected to present their arguments. The company has previously dismissed Catalyst's list of trial deficiencies as without merit. 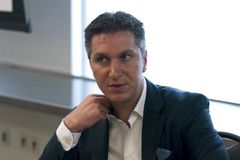