According to data compiled by U.S. research firm Gartner Inc., global smartphone sales grew at the slowest pace since 2013 in the second quarter of this year, with China posting a first-ever decline in sales of 4 per cent. Smartphone sales increased 13.5 per cent year-over-year, compared to an overall growth of 23.8 per cent growth for all of 2014.

Emerging markets such as the Asia-Pacific (excluding China), Eastern Europe, the Middle East and Africa had the fastest growing demand while mature markets such as North America and Japan continued to slack.

Nevertheless, no other region is as important to smartphone makers as China, which has enough weight to skew worldwide performance for the companies. It's the biggest country for smartphone sales – representing 30 per cent of total sales in the second quarter.

It's perhaps unsurprising that China would suffer a dip in sales given the recent economic news coming out of the country – from heightened signs of declining growth, to the stock-market crash and the devaluation of the yuan. But for a smartphone industry accustomed to, and dependent on, the country's once seemingly insatiable appetite, it's a wake-up call.

"We've hit the first wave of saturation in the Chinese market," said Roger Kay, president of Massachusetts-based Endpoint Technologies Associates Inc. "China's market is big and, given the fairly new middle class, you had good potential for smartphone sales … but, economically, that's changed."

And changed for reasons besides a slowing economy – increased competition from local brands are capturing the not-yet-middle class market, eroding profits and making it more difficult to achieve market penetration.

In a ranking of companies by International Data Corporation (IDC), three of the top five smartphone vendors in 2015 were all Chinese companies: Huawei, Xiaomi and Lenovo. In China particularly, "they have local advantage, a language advantage, and they are very cheap," said Mr. Kay. "They come in as price aggressors delivering more features … you can get a Xiaomi handset for $50."

This is particularly a problem for Apple, whose iPhones have dominated the Chinese market. The company sold 11.9 million units in the country last quarter. That helped Apple realize a 36-per-cent growth in overall sales during the quarter and gain 2.4 percentage points in market share. By contrast, because of a weaker presence in China, Samsung phones declined 5.3 per cent in overall sales in the quarter, losing 4.3 percentage points in market share.

But "the [Chinese] middle class and luxury market that wanted an Apple has mostly gotten an Apple at this point," said Mr. Kay, "the China advantage is no longer an advantage."

Much like other mature smartphone markets, China is leading the way in the replacement market.

For companies like Samsung and Apple that lead in market share and have hallmark products, "they can work the higher end and get the turnover sales and try to deliver more for the same money, but that's going to be hard won and not nearly as profitable as it was in the beginning," said Mr. Kay. For new entrants into the industry or companies unable to grow or keep market share, "it's going to be harsh, and some companies will be plowed over," he said.

This may well be the fate of BlackBerry. The company's share of the global smartphone market dropped from 0.7 per cent in the second quarter of 2014 to 0.3 per cent this year, according to Gartner.

Editor's note: The cost of a Xiaomi handset has been corrected in the online version of this story. 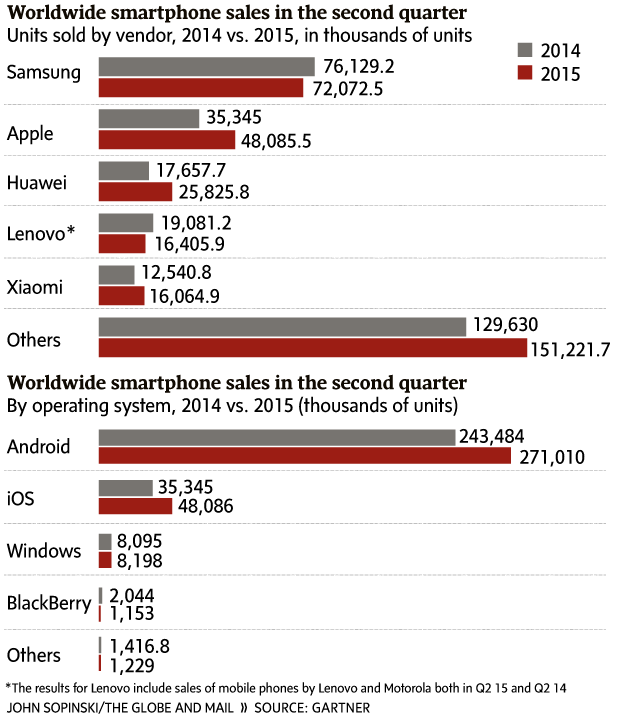 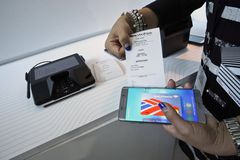