The Canadian bank that took the biggest beating in the credit crisis is coming to the aid of another troubled lender, further proof that the country's banks have emerged from the period with surprising strength.

Canadian Imperial Bank of Commerce will contribute $150-million (U.S.) to the recapitalization of a 152-year-old Bermuda-based financial institution, the Bank of N.T. Butterfield & Son Ltd., which has been overwhelmed by toxic loans and mortgage-backed securities.

Though in financial terms the move is small, it marks a significant shift for CIBC, which has shunned foreign acquisitions and focused on its domestic banking business ever since it sold most of its U.S. investment banking business in late 2007. It signals that the bank is now looking abroad for some of its future growth and suggests a new direction on the acquisition front - smaller investments in foreign markets that may include joint ventures and minority stakes.

In an interview last week, chief executive officer Gerry McCaughey suggested that large takeovers would be difficult right now, because regulators expect such deals to be financed through new equity so that they do not damage banks' capital levels. But he added, "when it comes to new investments outside of our core operations, we have a historically good track record in the area of minority investments, joint ventures and partnerships."

CIBC will own 22.5 per cent of Butterfield, the largest independent bank in Bermuda. The investment is part of a $550-million recapitalization that's being led by Carlyle Group, a private equity firm with about $88-billion (U.S.) in assets under management. Other investors include Bermuda Government Pension Funds and Goshen Investments LLC.

Rumours have been circulating that Butterfield would refinance or would be sold, and Bank of Nova Scotia and Royal Bank of Canada were pegged by observers as potential partners.

Butterfield reported yesterday that it lost $213.4-million (U.S.) in 2009, and it could incur further losses of $150-million to $175-million in the first quarter of 2010 as it restructures its balance sheet. Along with its recapitalization, the bank is suspending its dividend and replacing its CEO.

CIBC's ability to come to the rescue of an institution that needs capital comes more than two years after the Canadian bank tapped the market for $2.9-billion (Canadian) of common equity to shore up its own balance sheet. Exposure to U.S. subprime mortgages and other troubled assets caused CIBC to post more than $10-billion in writedowns since the crisis began in 2007, but the bank's profit in its most recent quarter amounted to $652-million, up from $147-million a year ago.

Canadian banks now find themselves with an abundance of capital compared with peers in the United States and Europe. While they are cautious about preserving it until global regulators firm up minimum capital requirements, they now have some flexibility.

CIBC will nominate two directors to the Butterfield board. It will also be providing the bank with a credit facility of up to $500-million (U.S.).

"Butterfield has strong market positions in Bermuda and the Cayman Islands, as well as operations in seven other jurisdictions," Mr. McCaughey said. "As a result of the recapitalization, we and our partner investors believe that Butterfield will continue to be a leading financial institution for its clients and will provide continued value for its shareholders."

Previous ventures of this type for CIBC have included CIBC Mellon, which is a 50/50 joint venture between CIBC and Bank of New York Mellon Corp., and FirstCaribbean International Bank Ltd., which was formed in 2002 from the merger of CIBC West Indies Holdings and Barclays Bank PLC's Caribbean operations. CIBC became the majority shareholder of FirstCaribbean in late 2006 and now holds more than 90 per cent of its shares. 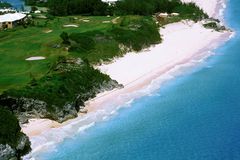