Tim Hortons's business has been disrupted in the past week by a cash-register computer virus that has affected hundreds of its restaurants across the country and forced some to close intermittently or shut their drive-throughs.

The glitches in restaurant owners' cash-registers and point-of-sale (POS) terminals were caused by malware that infected Tim Hortons's internal software system, prompting the franchisees' association on Monday to write a letter to parent Restaurant Brands International Inc. (RBI) seeking compensation for their losses.

"The business interruption includes inability to use some or all of the RBI/TDL issued cash registers and POS terminals, causing partial and complete store closures, franchisees paying employees not to work, lost sales and product spoilage," says the letter from Peter Proszanski of law firm Himelfarb Proszanski, which represents the Great White North Franchisee Association.

The letter was sent to RBI and its TDL Group Tim Hortons division.

Tim Hortons said in an e-mail it has been "actively supporting our restaurant owners and working with the external vendor to address intermittent POS outages at some restaurants, caused by an isolated virus."

It said fewer than 100 restaurants were currently affected "to some degree" and less than 10 "unable to operate any of their POS systems." It said it expected the issues to be resolved by the end of the day.

It did not elaborate on the source of the virus or whether its system had been hacked. But it said no customer data or credit card information was involved and apologized for any inconvenience to customers.

The cash-register setback comes amid increasingly tense relations between some of Tim Hortons restaurant owners and RBI over higher minimum wages in Ontario as well as wider issues and legal spats tied to the company's cost-cutting culture, which some say has been hurting their business.

Now the franchisees are pushing for answers to their latest questions about the cash register malfunction that is causing them to close their stores temporarily, or shut some of their cash registers, angering customers.

Franchisees say the system outages have occurred to varying degrees across Canada, with more acute problems in parts of Ontario, Quebec and Alberta.

They say they are tied to the company's internal Panasonic software system. A spokesman for Panasonic could not be reached.

In its lawyer's letter, obtained by The Globe and Mail, the association says franchisees have "suffered significant losses as a result of the current attack."

The association, which says it represents about 70 per cent of the Tim Hortons franchisees at the almost 4,000 restaurants in Canada, questions "how this system-wide outage happened" and what steps the company has taken to "protect against these risks? Now that the risk has materialized, what proactive steps will RBI/TDL take to protect against future malware attacks?"

In an internal e-mail to Tim Hortons restaurant owners late Friday – also obtained by The Globe – the company acknowledges that "the issues impacting your Panasonic POS terminals in your restaurants over the last few days have been challenging … We currently have approximately 350 restaurants that remain impacted by this issue.

"Panasonic and the collective Tim Hortons team, have been fighting the malware that has infected the Panasonic POS terminals … We appreciate the gravity of this issue, and the impact it has on your restaurants."

The company's internal e-mail says it added extra protection to its network and a system to do a full scan "to identify any gaps and dormant malware."

In an earlier internal e-mail to franchisees on Friday, also obtained by The Globe, Saad Pasha, manager of franchise performance at Tim Hortons, says it is looking at all possible causes of and solutions to the virus that attacked the Panasonic POS system.

"We understand that this issue is critical and very disruptive at restaurant level and our team continues to work with Panasonic with the highest sense of urgency," he says.

Mr. Pasha says "the fix" needs to come from Panasonic but the company is doing "everything we possibly can to advance the resolution of this issue."

Once the immediate problem has been resolved, the company will determine the root cause with Panasonic "and take all possible steps to mitigate any future impact," Mr. Pasha says in the e-mail.

The franchisee association was formed almost a year ago by unhappy restaurant owners to fight the tight-fisted management style of Brazilian private equity firm 3G Capital, which acquired control of Tim Hortons in late 2014.

Meanwhile, Tim Hortons is battling bad publicity from labour protests over the way some franchisees cut perks and benefits of its employees in January to deal with Ontario's more than 20-per-cent increase in minimum wages. 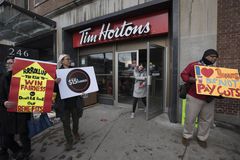 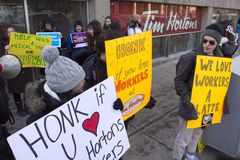