Jon Grant doesn't much care for the taste of Atlantic salmon.

But the Dalhousie University oceanographer is passionate about Atlantic Salmon farming. He says critics who argue it destroys the environment are relying on "rumour."

"Go to any place on the ocean in Nova Scotia and tell me if it's ruined. It's not," said Mr. Grant, who was awarded last week $1.6-million and appointed the Cooke Industrial Research Chair in Sustainable Aquaculture to conduct research, map the ocean floor and devise models to determine how to improve this multimillion-dollar business. "It's rumour and it's people willing to make conclusions without facts. This is the biggest problem. As a scientist, to me, evidence is the most important thing."

His five-year study will mostly focus on concerns about better managing the waste from farmed fish, preventing disease transmission and ensuring the pens are secure so fish don't escape into the wild.

Half of the money comes from a major Maritime business, Cooke Aquaculture, and the other half from the Natural Sciences and Engineering Research Council of Canada (NSERC), which spent a year vetting the long-time Dalhousie professor and his research proposal. It is the first time that industry and a university have worked together so closely in this area.

In the same way the land provides nutrients and sunshine for farmers to grow crops, Dr. Grant, 59, says the ocean provides "clean water and oxygen and the right temperature to grow Atlantic salmon."

The Atlantic Salmon Federation, however, disagrees with Dr. Grant's statements dismissing concerns about the industry. "It is concerning that Dr. Grant is beginning a five-year research project biased enough to say that critics who argue that open-pen salmon farming destroys the environment are relying on 'rumour'," Holly Johnson, of the Atlantic Salmon Federation, wrote in a letter to The Globe and Mail.

"Escapes are frequent occurrences in open-pen fish farming. Escapees enter rivers, and breed with wild salmon, causing reduced genetic diversity and fitness in wild populations. The prevalence of disease and parasites increases with the high density of fish in pens that is common to salmon aquaculture and spreads to wild fish, subsequently threatening the persistence of wild populations."

Atlantic salmon is Canada's top aquaculture export, according to Fisheries and Oceans Canada. British Columbia farms the most Atlantic salmon – nearly 72,000 tonnes in 2012 compared with 30,200 in New Brunswick and nearly 6,000 in Nova Scotia. Dr. Grant sat down with The Globe to explain his work.

What is your research?

It is looking at aquaculture from an ecosystem point of view … If aquaculture is in a bay, I look at the whole bay. I look at the health of the bay – how it is impacted by aquaculture. … We do computer modelling of bays. We make simulation models, which are used to predict currents, waves and the transformations that things like bacteria or organisms do to waste materials, including the water and the sediments. So we simulate the whole ecosystem. (He is studying two bays in Nova Scotia – one on the south shore and the other in the Bay of Fundy.)

Has this not been studied before?

No. (He explains the focus is typically around the immediate area of the fish pens.) If you think about it, that's tiny, relative to the size of most bays. So it's almost irrelevant to look only where the cages are. And this is one of the big problems with the public and aquaculture – if they see any problem with the cage they immediately extrapolate to the entire system, whereas the opposite is true. Many of the effects that you could observe with the cage are so diluted by the rest of the bay that they are only what we call near-field effects; local.

What do you want to have achieved at end of five years?

I want the application of advice to go from concept to practice so that we are able to provide sound advice for waste management, disease management, cage structure (cages can break or drift causing salmon to escape into the wild) and interaction with wild fisheries (he is mapping habitat of lobster so that a farm would not be located in prime lobster areas).

What concerns the public about fish farming?

They hear about waste on the bottom. This is a big one – that the bottom is polluted with fish waste – the feces from the fish and the food pellets that might go uneaten and sink to the bottom.

If your models work, what does that mean?

That means we have options for management … if Cooke says they would like to expand farming to other locations in the bay … we could advise them on places where the waste wouldn't overlap with waste from other farms, where it would be more likely to be dispersed. We might look at the spacing of the cages, or the footprint of the farm, and say if you make it this way you won't even have a waste problem in the first place. 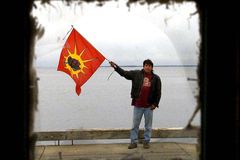 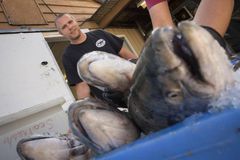 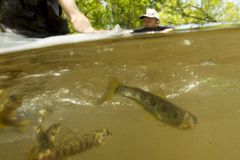 Infected fish at centre of lawsuit against Ottawa
May 8, 2013 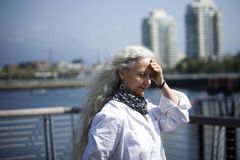 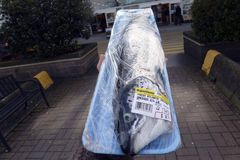