DavidsTea Inc. has helped reshape the retail tea market in Canada with its bright airy stores and sales people trained to engage shoppers on all things tea-related.

The premium chain's aqua-hued stores, with rows of 150 different loose leaf teas in metal cans on its "tea wall" and takeout tea latte at $4.45 a cup, have brought a new energy to a once sleepy beverage segment.

But, as its most recent quarterly results show, Montreal-based DavidsTea, which has been rapidly expanding in North America, is starting to lose some steam.

"We can and we must do better," departing chief executive officer Sylvain Toutant told analysts last month.

After essentially reinventing the segment in Canada, DavidsTea is struggling with declining sales growth at existing stores and lower profit margins in an increasingly crowded market.

Its newer shops in Canada are stealing away business from established ones while its strategy of encouraging customers to linger, chat with staff and sniff the tea aromas isn't catching on in its U.S. outlets.

Now, the retailer, started in 2008 by Herschel Segal, founder of clothier Le Chateau Inc., and his cousin David Segal – the David in DavidsTea – is revamping its U.S. blueprint under an interim leader as it searches for a permanent CEO.

But industry watchers point to stiffer competition from Seattle-based Starbuck Corp.'s Teavana, smaller shops and coffee chains, which is making it more difficult for DavidsTea.

"You're seeing a lot more competitors in the space which are starting to steal share away," Darren Tristano, president of researcher Technomic in Chicago, said. "This is a really expensive product for most American consumers."

While loose tea at a supermarket can sell for about $7 (Canadian) for 100 g, many of DavidsTea's offerings start at approximately the same price for 50 g and reach well into the double-digits for some blends.

Kelly Bania, a retail analyst at BMO Nesbitt Burns, said she is concerned about the uncertainty surrounding DavidsTea outlook and the "risk that new store growth continues to slow." Analysts worry about the chain's U.S. expansion as it takes on the giant Starbucks.

Uncertainty about DavidsTea's leadership is another pain point. The company abruptly announced Mr. Toutant's departure in October after he had been with the company just over two years. Mr. Toutant simply said he's leaving for "personal" reasons. Earlier in 2016, David Segal stepped down as the chain's brand ambassador.

Investors have not reacted well. DavidsTea's stock price, which got a big pop after it went public in mid-2015 at $19 (U.S.) a share, has sunk on the Nasdaq market and closed on Monday at $6.50.

Replacing Mr. Toutant as interim CEO is Christine Bullen, a seasoned U.S. retailer who joined DavidsTea last May to head its division south of the border. Ms. Bullen wasn't available for an interview because DavidsTea is in a "quiet period" until it reports its fourth-quarter results on April 14, a spokeswoman said.

Ms. Bullen took the top job as DavidsTea reported disappointing third-quarter results and lowered its outlook for its crucial fourth quarter. In that holiday period, the chain generates 40 per cent of its annual sales and roughly 75 per cent of earnings before interest, tax, depreciation and amortization, Ms. Bania has estimated.

DavidsTea executives pointed to a weaker consumer backdrop, pushing them to slash prices which hurt margins. The chain is scaling back its store growth plans, with only 25 to 30 new shops planned for next year, compared with 40 in 2016.

The results prompted Ms. Bania last month to downgrade DavidsTea shares to "market perform" from "outperform" and cut her target stock price to $9 from $16.

Still, DavidsTea is forging ahead with a new strategy for its U.S. stores, where it is now looking for less prominent locations and lower rents. It introduced a new prototype shop in Boston in November, featuring a self-serve model to help customers make purchases faster.

"We have found that our U.S. customers prefer to shop quickly and efficiently," Mr. Toutant said. The Boston store also stocks prepacked loose-leaf tea without the signature DavidsTea service counter. And the retailer is overhauling offerings to respond more to local tastes, he said.

The chain is finding the right balance between its brick-and-mortar stores and e-commerce, which represented 9.4 per cent of overall sales last year and is targeted to reach 15 per cent.

As DavidsTea rejigs its operations, Starbucks's Teavana has its own ambitious plans. Teavana expects to double its roughly $1-billion (U.S.) of annual sales in five years, Sharon Rothstein, an executive vice-president at Starbucks, said recently. It's also expanding outside of North America. "We're still in the early stages of our Teavana journey," she said.

Despite its challenges, DavidsTea has been a catalyst in the overall spike in tea sales in past years, said Louise Roberge, president of the Tea and Herbal Association of Canada. South of the border, the roughly $14-billion tea market is growing at about 4 to 6 per cent a year and expected to continue at that pace for the next few years, the Tea Association of the USA estimates.

Millennial women are particularly drawn to specialty tea, seeing it as an attractive beverage choice partly because it is touted as healthy and having no calories, Ms. Roberge said. Many coffee chains have added tea to their offerings to attract customers in the afternoon and evening, when tea is consumed more, she said.

Even so, DavidsTea may have a tough slog to reach its goal of more than doubling to 550 its current store count as it grapples with a weaker-than-expected financial performance. "Obviously, we're not pleased with it and we're working really hard to identify what things we need to change," chief financial officer Luis Borgen said.

DavidsTea under scrutiny in U.S. over alleged use of ‘on-call’ shifts
April 13, 2016 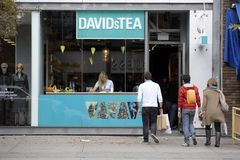