As Dollarama Inc. prepares to raise its top prices to $4 from $3 amid steeper purchasing costs, the retailer has found new meaning in the lowly toothpick.

Instead of trying to sell as many cheap toothpicks as possible, now Dollarama looks for better-quality products that "don't leave wooden chips in between our teeth as we use those toothpicks," chief executive officer Larry Rossy said on Wednesday.

"It's not so much that we can offer 500 toothpicks," he told analysts after the company reported strong fourth-quarter results. "But it's more if we offer 200 very good toothpicks that the customer will be happy with, I think that's what counts at the end. It's a culture that we're trying to instill in everyone. Again, it's not quantity but quality that counts."

The move comes as Dollarama races to make merchandise changes to lure more customers while coping with a weak Canadian dollar, which has driven up import costs for Dollarama and other retailers and forced them to find a new economic model in their product offerings.

Faced with currency and competitive challenges, Montreal-based Dollarama announced a changing of the guard that paves the way for the Rossy family's strategy of hand-picking products and store locations to live on. On May 1, Mr. Rossy's son Neil, 46, currently chief merchandising officer, will take the CEO job while the elder Mr. Rossy, 73, will remain active in the company as executive chairman.

As Peter Sklar, retail analyst at BMO Nesbit Burns noted: "This is clearly not a retirement announcement."

Neil Rossy has been with Dollarama since its start in 1992 and a member of its board of directors since 2004.

He said Dollarama is looking to find ways to make its products more economically viable amid the weak loonie and higher purchasing costs. The soft global economy is giving the retailer some flexibility to bargain for better prices with suppliers in China, but the negotiating advantage doesn't totally make up for the currency pressures, he said.

Dollarama is finding other ways to change its merchandise offerings. For instance, the retailer is able to remove two pencils from a pack of pencils "and still be competitive to help with offsetting some of the headwinds," Neil Rossy said.

In other cases, it replaces a product with another one "that is just as compelling but different at a lower cost, potentially. That's another way [Dollarama inventory] buyers can use that tool to help them with the current challenges," he said.

Despite the shifts, Dollarama is sticking with the same product categories, such as household items, with no intention of moving into unfamiliar territory (such as fresh or frozen foods), Larry Rossy said.

But it's looking to offer "better value" in "more practical" and "a little more expensive" goods, he said. "You can only do so much at $1 when it comes to a vase," he said. "But you can do a lot more at two [dollars] and three and I don't know about four but I would imagine four too, when the time comes."

The company plans to add items for $3.50 and $4 starting in the second half of 2016. The initiative will help Dollarama generate a lift in its critical same-store sales at outlets open a year or more, said Irene Nattel, retail analyst at RBC Dominion Securities. Those sales jumped 7.9 per cent in its fourth quarter.

She predicted Dollarama's same-store sales will rise 5.1 per cent this fiscal year and 6 per cent next year.

The company raised is outlook for the current year, increasing its gross profit margin by one percentage point to between 37 and 38 per cent.

But Michael Ross, chief financial officer of Dollarama, acknowledged that its gross margins will probably drop in the coming years as a result of heated competition. "For the future, I think it's reasonable to expect that the competitive landscape will continue increasing and there will be pressures on the gross margin to go down," Mr. Ross said. 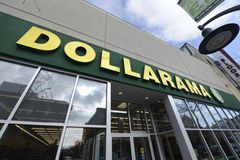