Alberta's dark warnings of dire financial straits are set against a province filled with gilded scenes of prosperity. Patients stream into a gleaming $1.3-billion hospital in on the southern stretches of Calgary, its emergency rooms opened just this January. Road planners are preparing to grade 76 kilometres of new twinned highway to Fort McMurray. Even the Alberta legislature is under wraps, its dome shrouded as crews conduct a top-to-bottom facelift that will leave the 100-year-old building with fresh paint and a gleaming new finish on marble floors.

This is hardly the image of a province in distress.

And yet, last summer, Alberta fired up a bond-selling machine – the latest issuance, for $750-million, came on Feb. 5 – that National Bank of Canada expects will borrow $6.1-billion by March, 2013, although some may be renewals of old debt. It's something Alberta hasn't seen since Ralph Klein vanquished the provincial debt in 2004.

Premier Alison Redford has blamed a $6-billion plunge in oil revenues she has called the "bitumen bubble." Many Albertans have responded with a fury directed largely at government profligacy. This is, after all, a province where doctors are paid 14 per cent more than the national average, where per-capita health care costs in the past decade have outstripped inflation by 3.5 per cent a year and where government spending has more than doubled since 2000, a decade that saw a 25-per-cent rise in population.

"We have a premier who says we're out of money. We're not out of money. We have just overspent beyond our capacity," said Danielle Smith, leader of the province's Wildrose opposition. "They've increased year-over-year spending at a rate that was twice inflation and population growth. They just relied on resource revenues to continue to bail them out of their problems."

Yet the story of Alberta's profligacy is muddied by the fact that Alberta is hardly unique. In per-capita program expenditures, Alberta hasn't been Canada's top-spending province since 1993. In 2011-12, it took fourth place – a position it has held for several years – behind Newfoundland, Manitoba and Prince Edward Island.

"The overspending is largely a myth," says Melville McMillan, a Cornell-educated fellow in the institute of economics at the University of Alberta.

It hasn't always been this way. Per-capita program spending figures compiled by Royal Bank of Canada show that, in the early 1980s, Alberta was an eye-popping 77.7 per cent higher than the average of the other large provinces, B.C., Ontario and Quebec. Then, for a half decade after Ralph Klein took office, Alberta actually dropped 3.5 per cent below its major rivals, before beginning to rise again. During the recession years of 2008-09, Alberta's spending was one-third higher than the big-province average, but has since moderated to 23 per cent above – in good measure because other provinces also spent heavily.

But though that gap remains significant, it's likely overstated. A Statistics Canada analysis that provides a more apples-to-apples comparison showed the 2008-09 gap between Alberta and B.C., Quebec and Ontario was 17 per cent, half the 33 per cent shown by RBC numbers, which are based on varying provincial accounting methodologies. Plus, Alberta has an expensive work force, driving competition for public sector wages.

Alberta's fiscal problems are "mostly on the revenue side," said Robert Hogue, a senior economist with RBC.

The province has calculated that, were Alberta to tax its people like Ontario does, it would bring in an extra $12.1-billion a year; matching Saskatchewan or B.C. would net an additional $10.7-billion.

The Wildrose says higher taxes are a terrible idea, akin to asking Alberta to join "the ranks of Canada's overtaxed and underproductive provinces." Cutting fat is a better strategy, Wildrose has argued.

Others disagree. "We can't focus on our costs. That's not going to make a dent," said George Gosbee, a Calgary investment banker. On Saturday, at a government-organized economic summit, Mr. Gosbee plans to suggest introduction of what he calls the "DST," a "differential sales tax" intended to temporarily make up the gap from discounted pricing for Alberta's heavy oil.

Others believe the problems are more fundamental.

Ronald Kneebone, an economics professor at the University of Calgary, faults Alberta for spending heavily on new roads and hospitals without the tax burden those would normally impose. Surging energy revenues have made those decisions painless, but "it wouldn't surprise anyone to understand that that leads to fairly loose spending" – and that's "a very high-risk budgeting strategy."

Alberta would be better, he said, to budget on more stable revenue sources than energy royalties. The so-called "Alberta Advantage" has been built "by relying on something you cannot rely on. And it's now caught them again. It's not the first time it's caught them. It's just the latest."

Oil sands workers heed the call of the mall Redford calls on energy workers to raise the flag 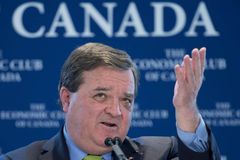