Bank of Canada Governor Stephen Poloz says there's a brighter future ahead if people can look beyond an economy that's teetering on the brink of outright contraction.

The central bank kept its key overnight lending rate unchanged Wednesday at 0.75 per cent, even as it released a new forecast showing Canada's oil-dependent economy stalled and likely didn't grow at all in the first three months of the year.

The no-growth forecast is a sharp downgrade from the 1.5-per-cent annual growth rate the bank predicted just three months ago, when Mr. Poloz rattled financial markets with a surprise quarter-percentage-point rate cut.

But Mr. Poloz insisted the economy would snap back in the second half of the year as the shock of the oil price collapse fades – optimism that suggests more interest rate relief likely won't be needed.

"By the middle of the year we should be seeing only the good stuff," Mr. Poloz told reporters in Ottawa.

Some analysts aren't convinced Mr. Poloz is right. He got the first quarter wrong and now he's overoptimistic about what the rest of the year will bring, said Ben Homsy, a fixed-income analyst at Leith Wheeler Investment Counsel in Vancouver.

"The impact from low oil prices on the Canadian economy is not a one-quarter event," Mr. Homsy said. "We'll see that reverberate through the second and third quarters."

He pointed out that dismal factory sales, which fell for a second consecutive month in February, suggest the lower Canadian dollar isn't yet helping non-energy exporters.

Bank of Nova Scotia economist Derek Holt echoed that view, saying in a research note that the Bank of Canada's forecasts may be "on the aggressive side."

The bottom line for the bank is that while the hit to jobs, growth and investment from lower oil prices came earlier than expected, it isn't any larger. The bank now says the Canadian economy will grow 1.9 per cent for the year, down from the 2.1-per-cent pace it expected in January.

"The impact of the oil price shock on growth will be more front-loaded than predicted in January, but not larger," the bank said in a statement accompanying the rate announcement. "The ultimate size of this impact will need to be monitored closely."

The bank said the harsh winter and "temporary weakness" in the United States also weighed on Canada's economy in the first few months of the year. After that, a "natural sequence" of higher exports, business investment and job growth will "re-emerge," it said.

And yet the bank's own monetary policy report is filled cautious notes – about oil prices, employment, a possible housing correction in Toronto and Vancouver, sluggish business investment and falling prices for a number of key commodity exports, such as natural gas, lumber, hogs and iron ore.

The bank has not altered its view that the economy will get back to full capacity "around the end of 2016" – a rough indicator of when it might need to start hiking interest rates.

In its statement, the bank said the "current degree of monetary stimulus remains appropriate."

The bank warned of possible further declines in oil prices, which it said remain "low and volatile" amid continuing global overproduction and rapidly swelling inventories. Brent crude is now selling for roughly $59 a barrel, down from last summer's peak of $110.

The bank expects business investment across the country to slump 0.7 per cent this year, compared with the flat spending it had forecast in January. Investment in the energy sector will slump 30 per cent, the bank said.

Part of the problem is that a Canadian dollar at roughly 80 cents, while good for exporters, makes it more expensive for companies to buy imported machinery and equipment. The bank estimates that the cheaper dollar is boosting core inflation, which excludes volatile energy prices, by 0.3 to 0.4 per cent.

Indeed, the bank says prices are rising faster than it thought just three months ago, in spite of lower oil prices. It raised its forecasts for both total and core inflation.

The bank also cautioned that the "full impact" of the oil price shock has yet to show up in job statistics. 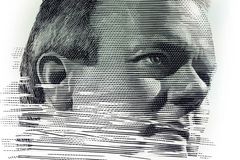 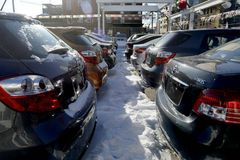 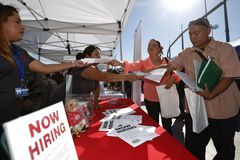 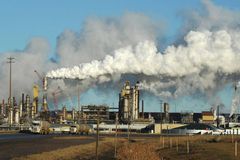