Bank of Canada Governor Stephen Poloz says another interest rate cut remains in play as the country's economy braces to take a "material" hit from a much more protectionist United States under Donald Trump.

The central bank kept its key rate unchanged at 0.5 per cent Wednesday. But Mr. Poloz said he's closely watching what happens in the United States to gauge the magnitude of the potential fallout as the president-elect prepares to step into the White House later this week.

What does the Trump era mean for Canada? A guide to what's coming

Subscribers: Will history be the greatest enemy of Trumponomics?

When is Trump the president? Your guide to the U.S. inauguration

He repeated the shock effect Wednesday, even as he modestly bumped up the bank's forecast for Canadian growth this year. The bank cut rates twice in 2015, but hasn't budged since.

Canada's economy is facing an unusual amount of uncertainty – and not just because the incoming Trump administration is threatening to impose a massive border tax and renegotiate the North American trade agreement.

Companies are still not hiring, exporting or investing at a rapid pace in the aftermath of the oil price collapse, leaving growth slow and inflation below the bank's 2-per-cent target.

Canada is also dealing with the recent bounce-back in the Canadian dollar, which has gained ground so far this year versus both the U.S. dollar and other major currencies. A stronger dollar generally makes exporters less competitive.

The bank said U.S. protectionist measures would have "material consequences for Canadian investment and exports." In a statement, the bank said it will continue to assess the impact of developments in the United States, mindful of the "significant uncertainties weighing on the outlook."

Among the most worrisome unknowns is the threat of protectionist measures in the United States, Canada's largest trading partner and destination for roughly three-quarters of its exports.

Speaking to reporters, Mr. Poloz said the bank is "particularly concerned about the ramifications of U.S. trade policy, because it is so fundamental to the Canadian economy." But he said the risks aren't built into the bank's forecasts because their impact is "unknown at this point."

Nonetheless, he said the bank would adjust rates, if necessary. "Should any of those downside risks materialize and put our inflation target at risk, then we would have the room to manoeuvre," he said.

It's still unclear, he said, if the United States is talking about targeted measures aimed at specific companies and countries, or a much broader protectionist wave that could change the rules of the game for everyone.

"Pulling back on trade is a negative-sum game," Mr. Poloz said. "You reduce income, and not just on one side of the border."

The central bank's latest forecast, released Wednesday, assumes the Trump administration and the Republican-controlled Congress will push through significant personal and business tax breaks that, on balance, will give Canada's economy a modest lift.

"A potential protectionist shift is clearly on their radar," Bank of Montreal economist Benjamin Reitzes said.

The Bank of Canada readily acknowledged that its modestly upgraded economic forecast does not reflect "the full range" of possible U.S. policy changes – most notably the potential damage from greater protectionism.

"Prospective protectionist trade measures in the United States would have material consequences for Canadian investment and exports," the bank said bluntly in its quarterly monetary policy report.

The bank pointed out in its forecast that a "protectionist tilt" is already evident in the United States, warning that the damage to exports and investment could be significant, particularly if Canada and other countries retaliate with trade barriers of their own.

"In a more adverse scenario, the process of globalization – and notably the development of global value chains, which has underpinned world growth in recent decades – could go into reverse," the report added.

"Beneath a steady-as-she-goes decision lies a great deal of concern for the Bank of Canada," Toronto-Dominion Bank economist Brian DePratto pointed out in a research note. 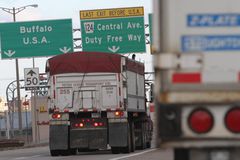 CMHC hiking mortgage insurance premiums for third time in four years
January 17, 2017
Canada given advance notice of Trump’s NAFTA demands
January 18, 2017
Follow Barrie McKenna on Twitter @barriemckenna
Report an error Editorial code of conduct
Due to technical reasons, we have temporarily removed commenting from our articles. We hope to have this fixed soon. Thank you for your patience. If you are looking to give feedback on our new site, please send it along to feedback@globeandmail.com. If you want to write a letter to the editor, please forward to letters@globeandmail.com.
Comments