Bank of Canada Governor Stephen Poloz said one of the biggest risks to the central bank's new outlook on the Canadian economy is actually a positive one: That the robust U.S. economy may prove even stronger than forecasters have been anticipating.

Speaking in a panel discussion at the Bloomberg Americas Monetary Summit in New York on Monday, Mr. Poloz allowed that the new forecasts in the central bank's Monetary Policy Report published last week – calling for economic growth to rebound in the second half of the year after a first quarter in which the bank believes the economy didn't grow at all – would have to be "re-evaluated" should oil prices slump again after their modest recovery since the start of the year. However, he expressed optimism that "other things may have changed at the same time" that could counter any additional oil weakness.

"For example, our biggest risk, I think, today, is that the U.S. economy will prove to be quite a bit stronger than most of us are assuming. That's a really important risk. It's a positive risk," Mr. Poloz said.

The U.S. economy has been more sluggish early in the year than many observers had hoped, with economists estimating that gross domestic product grew at only about 1.4 per cent annualized in the first quarter. Unusually harsh winter weather has been blamed for slowing economic activity on many fronts, while the strength in the U.S. dollar appears to have become a drag on exports. However, economists expect the growth rate to rebound to about 3 per cent annualized in the last three quarters of the year – a recovery that would bode well for Canada's exports.

Mr. Poloz suggested that once factors such as poor weather and west coast port strikes are in the rear-view mirror, the U.S. economy could be positioned to beat expectations.

"The U.S. economy has great fundamentals, and every time it's a little slower, we can see the reason why," Mr. Poloz said. "When there's no reasons why, then I think it's going to pop, and we'll have good performance there that is a little stronger than everybody is expecting."

And he said that if the accelerating U.S. economy causes his counterparts at the U.S. Federal Reserve to begin raising interest rates (the so-called Fed "liftoff") sooner than expected, he wouldn't view that as adding an unwelcome complication to his own monetary policy – even if it did cause further gyrations in the Canadian dollar.

"Whenever liftoff happens, it will be in a context that's helpful to us," he said, referring to the stronger U.S. economic momentum that a Fed rate hike would imply. "That has a pretty natural spillover to Canada."

The Bank of Canada last week projected that after zero-per-cent growth in the first quarter, the Canadian economy would expand at an annualized rate of 1.8 per cent in the second quarter, before accelerating to rates of 2.8 per cent in the third quarter and 2.5 per cent in the fourth, as the strength of non-energy exports take over and the impact of the oil price shock fades from Canada's economy.

Mr. Poloz reiterated that the central bank believes the oil shock impact was "front-loaded," arriving earlier than expected, but that should mean it will also dissipate earlier than expected and clear the way for stronger performance for the rest of the year. He noted that current oil prices are in line with the central bank's assumptions when it made its surprise rate cut in January, which suggests that the economic impact of the shock is still in line with what the bank anticipated at the time of the cut.

"[That] doesn't sound like I'm more optimistic or less optimistic. I'm just saying that's what we see," he said – a nod to his position that he won't provide explicit forward guidance to markets on the bank's bias for the future direction of its interest rates. The bank held its key rate steady at 0.75 per cent in its most recent rate decision last week.

"We think the interest rate is correct. We've laid out our forecast. And that's where markets should expect things to be." 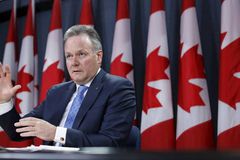