The Bank of Canada has launched a multiyear effort to overhaul the sophisticated computer models it uses to forecast the economy after they failed to foreshadow the deep and persistent aftershocks of the global financial crisis.

Governor Stephen Poloz acknowledged Tuesday that its forecasting tools have been pushed "persistently off track" in the decade since the 2007-09 crisis, leading to missed targets on inflation and other indicators.

"Investing in the next generation of models is one of the bank's top priorities," Mr. Poloz insisted in a speech hosted by the University of Alberta's School of Business in Edmonton. "Better tools will mean a more stable and predictable rate of inflation, and an even better environment for economic decision making."

He pointed out that while the banks models are still working well, "recent experience is pointing to some shortcomings that we need to address."

Earlier this month, the central bank disclosed that it has tweaked its key model – the Terms-of-Trade Economic Model, or ToTEM – to more accurately predict export trends. The bank has struggled in recent years by consistently overestimating the contribution of exports to GDP growth – largely because Canada isn't getting as much of a lift from U.S. growth as it has historically. The changes will incorporate a larger disconnect between the Canadian and U.S. economies in the future.

The bank has also delayed its call on when the economy will return to full capacity numerous times in the past three years. Inflation has remained stubbornly below the bank's 2-per-cent target.

Structural changes in the economy may have injected a bias into the bank's projections, "making it more likely that its suggested interest rate path will lead to missed targets," according to Mr. Poloz.

As an example, he said the bank's models hadn't accurately predicted the economy's muted response to the recent fall in the Canadian dollar. Following a long oil boom that had seen resources shifted within the economy, the models hadn't taken into account how many businesses had closed in non-resource sectors.

"The economy didn't respond to the subsequent fall in the Canadian dollar the way our model would predict because the companies that would have responded are no longer there," he told reporters.

Repeating a call he has made in the past, Mr. Poloz said that whenever the economy returns to normal growth, it will "be a new normal" as a result of those structural changes.

Mr. Poloz said during his remarks that ToTEM and other models have provided "little insight into the forces that produced the global financial crisis or the behaviour that has come afterward."

Mr. Poloz said he has directed bank staff to develop new tools to better predict more granular corporate and consumer behaviour, giving them what he called a "licence to innovate." He acknowledged there is a lot the bank doesn't know – including how persistently low interest rates have affected risk-taking, how geopolitical uncertainty is holding back corporate investment and how monetary policy affects global value chains.

Mr. Poloz couldn't put a price on the refurbished models in a press conference following his speech. The work would be carried out by the bank's research staff, he said.

"At a minimum, the next generation of models must capture the links between the financial system and the real economy," he said.

He warned that models always make errors, but these will typically offset each other over time.

"Economic models are not crystal balls," he said. "The fact that models can deliver only an approximation of the truth means that conducting monetary policy is not a mechanical exercise."

Instead, he suggested it's as much art as science. 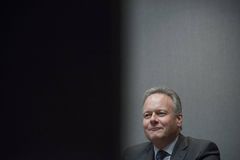 Follow Barrie McKenna and Justin Giovannetti on Twitter @barriemckenna @justincgio
Report an error Editorial code of conduct
Due to technical reasons, we have temporarily removed commenting from our articles. We hope to have this fixed soon. Thank you for your patience. If you are looking to give feedback on our new site, please send it along to feedback@globeandmail.com. If you want to write a letter to the editor, please forward to letters@globeandmail.com.
Comments