If Bank of Canada Governor Stephen Poloz wanted more evidence that it may be time to start raising interest rates, he got it with an unequivocally upbeat reading of the mood of Canadian businesses.

After the survey's release, the chance of a July rate hike rose to 84 per cent from about 70 per cent, according to Bloomberg. Nine of 16 economists polled by Bloomberg now expect the central bank to raise rates to 0.75 per cent in July from the current 0.5 per cent.

The survey is one of the key pieces of information that Mr. Poloz and his central bank colleagues use to set monetary policy.

It was conducted between early May and early June, just before Mr. Poloz and his deputies started publicly saying the economy has turned the corner from the devastating oil price collapse that began in 2014.

The economy is showing signs of strength, with the job market booming and gross domestic product growing the fastest among the Group of Seven advanced economies.

A composite indicator of the various survey results reached its highest level in six years. Half of the businesses polled expect sales to pick up next year, while two-thirds said they plan to hire over the next year, after months of strong employment growth.

The positive hiring intentions were found across all sectors and regions. Nearly half of the firms even said they would have problems meeting future demand increases.

"Positive business prospects are increasingly widespread across regions and sectors," the survey said.

There are now reports of growing labour shortages for the first time in more than two years, particularly in British Columbia, where residents are clamouring for housing and people are visiting the province in record numbers.

There's "a level of construction activity that hasn't really been seen before," said Rory Kulmala, chief executive of the Vancouver Island Construction Association. "Everybody wants it done yesterday," he said.

A B.C. tourism human-resources firm has about 800 seasonal and permanent postings right now, but the positions are hard to fill. "It's the booming economy, competition and … fewer young people entering the work force each year," said Arlene Keis, go2HR's chief executive.

For two consecutive years, Whistler Blackcomb has had to hire 200 more people than the previous season, amid a flood of tourists from the United States and Mexico.

"It's wonderful for our business environment, but creates challenges for those businesses to keep up with the demand," said Joel Chevalier, the ski resort's vice-president of human resources.

The central bank said both high- and low-skilled workers are in short supply, including information technology professionals, experienced staff to take over from retiring employees and building trades workers.

The survey gathers the views of senior executives at 100 companies across the country, chosen to reflect the makeup of the Canadian economy.

It was released on the same day Statistics Canada reported that the country's economy grew by 0.2 per cent in April, setting the stage for a solid second-quarter showing after a robust first quarter.

Only one more critical piece of economic data – June's job numbers – is due to be released before the central bank's rate-setting meeting July 12.

One economist said this should not stop Mr. Poloz from raising rates, given the volatile nature of the monthly labour report.

"It is a green light to go on July 12th," said Stéfane Marion, chief economist with National Bank of Canada, who changed his rate hike forecast to July from October. "I don't even care and they shouldn't care about the upcoming employment report … This should not be a distraction for the Bank of Canada. We all know it is very volatile."

If Mr. Poloz hikes rates, it would be the first increase in seven years, and the first move of any kind since rates were cut twice in 2015.

Since the survey was conducted, Mr. Poloz has twice said that his 2015 rate cuts have largely done their job. Two of his deputy governors have said the economy is on stronger footing.

One of the only downbeat bits of data was on the inflation front, where expectations of price increases "edged down," according to the bank. Indeed, all three of the Bank of Canada's measures of core inflation remain well below its 2-per-cent target.

The Canadian dollar held solidly above 77 cents (U.S.) after the release of the report. 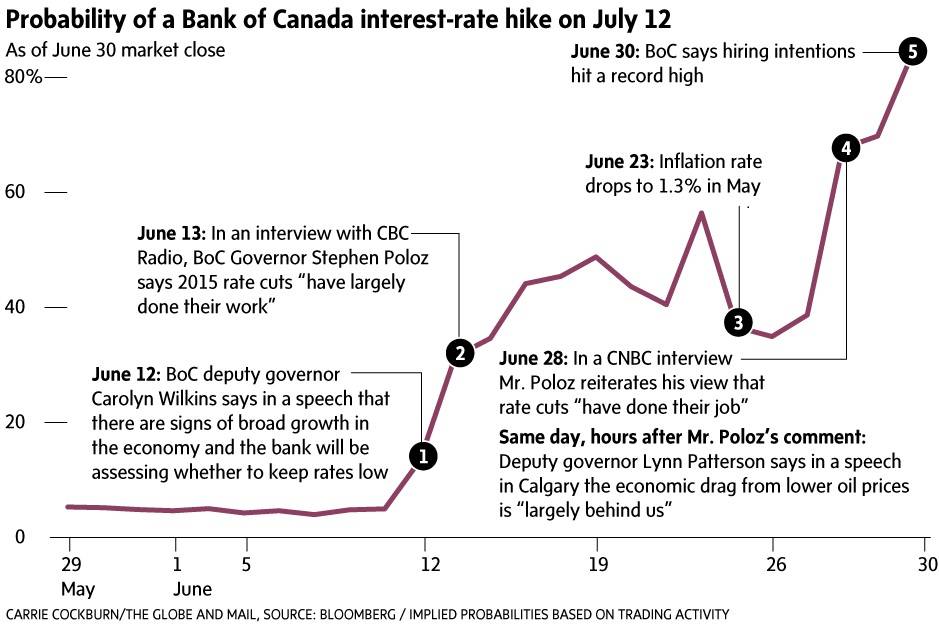 Bank of Canada official’s private speech raises questions of access
June 26, 2017
Higher interest rates will increase Ottawa’s budget deficits, report warns
June 30, 2017
Follow Barrie McKenna, Josh O’Kane and Rachelle Younglai on Twitter @barriemckenna @joshokane @rachyounglai
Report an error Editorial code of conduct
Due to technical reasons, we have temporarily removed commenting from our articles. We hope to have this fixed soon. Thank you for your patience. If you are looking to give feedback on our new site, please send it along to feedback@globeandmail.com. If you want to write a letter to the editor, please forward to letters@globeandmail.com.
Comments