Canada's jobs market has awoken from its slumber, but it may take some time for wages to catch up.

Employers added 43,100 jobs in October, marking the first back-to-back months with job growth in nearly a year and driving the unemployment rate to 6.5 per cent – the lowest since November, 2008, Statistics Canada reported Friday.

There are signs momentum is building. In both September and October, the private sector led the growth and full-time jobs have also increased. Two months of sturdy job gains in Ontario, Canada's most populous province, means its jobless rate matched the national average for the first time since 2006.

But even with an autumn burst of hiring, slack – or unused capacity – lingers in the labour market, with still-elevated numbers of long-term unemployed and low participation rates.

And recent hiring is not translating into higher pay: Year-over-year wage gains eased to just 1.9 per cent for permanent workers, below the rate of inflation, suggesting household finances are still squeezed.

"There continues to be slack in the labour market and spare capacity in the economy," said Dawn Desjardins, assistant chief economist at the Royal Bank of Canada, noting that broader measures of unemployment, such as discouraged workers, still show softness.

Given that the labour market has only perked up in recent months, "there will likely be a lag before we start seeing that improvement show up in wage growth," said Toronto-Dominion Bank economist Diana Petramala. Unionized workers in particular are seeing tepid gains, she added. Average hourly wages of unionized workers are up just 0.4 per cent, year over year, a reflection of government restraint and a tough bargaining climate, compared with 2.3 per cent for non-unionized workers.

In the past year, employment has grown by a still-moderate pace of 1 per cent, with two-thirds of that gain occurring in the past two months alone.

Part-time employment has risen 3 per cent in the past year, while full-time work is up by 0.6 per cent and the number of hours worked is little changed, up 0.4 per cent.

Canada's broadest measure of unemployment, the R8, which includes discouraged workers and involuntary part timers, ebbed to 8.7 per cent last month, the lowest for any October since 2007.

"While monthly job numbers can be volatile, the significant increase in the last two months indicates a positive trend," Finance Minister Joe Oliver told reporters in his constituency office in Toronto, noting he is pleased with the growth of full-time and private-sector work, with more than two-thirds in what he termed "high-paying jobs."

Though the job market has picked up, risks remain, among them falling commodity prices and uncertainty over global growth.

In a speech on Monday, Bank of Canada Governor Stephen Poloz said the labour market "has not yet returned fully to normal."

He noted that most recent job growth is in part-time positions, while hours worked are "barely growing at all." And he estimated there are about 200,000 young people who are either out of work, underemployed or back at school in the hopes of improving their job prospects. The youth jobless rate fell to 12.6 per cent last month, the lowest since 2008, from 13.5 per cent.

But that's not the whole story. The drop was mostly due to a fall in the participation rate, and the portion of young people working in full-time positions hit a record low last month.

Most youth who worked part time said they chose to work part-time hours because they were in school. The portion of youth working in part-time positions who said they wanted a full-time job has stayed at about 20 per cent in the years following the economic downturn, higher than the rate of about 15 per cent in 2007, he said.

October's gains came in the private sector and among the self-employed, while the public sector cut jobs. In the past year, self-employment has risen 1.5 per cent, outpacing 0.9-per-cent growth among paid workers.

Industries tied to trade grew, with employment rising in wholesale trade and manufacturing. Public administration cut jobs, as did natural resources, which has seen declining commodity prices in recent months.

All of the job gains last month were among people between 25 and 54 years old, with most of the increase among women.

Among provinces, employment rose in Ontario, Manitoba, Nova Scotia and Prince Edward Island while it fell in New Brunswick.

Wide disparities in job-market performance persist across the country, with tighter labour markets in the Prairies, noted Mark Hopkins, senior economist at Moody's Analytics. Still, the slide in oil prices and the falling Canadian dollar mean "this trend may be reversing somewhat."

With files from David Parkinson and Adrian Morrow 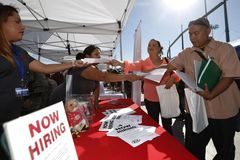 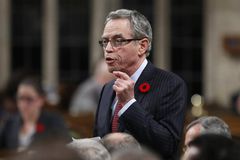 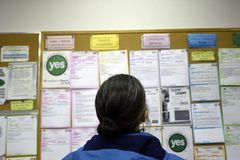 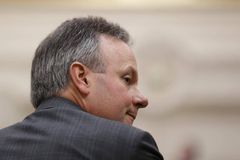