It's not often that a shift in U.S. economic policy tilts in Canada's favour.

Canadian exporters are more accustomed to the U.S. Congress occasionally stomping on them, intentionally or not, with measures such as Buy America laws, country-labelling rules for meat and controls on lumber shipments.

Suddenly, however, Washington has delivered a surprise gift. A move this summer by the Republican-led Congress to abruptly cut off funding to the U.S. Export-Import Bank is giving Canada a competitive edge in the race to attract new factory investment.

But it's also shining a light on the significant and often misunderstood role that governments everywhere play in backstopping their export industries.

This week, U.S. industrial giant General Electric Co. said it will shut an industrial engine plant in Wisconsin and shift production to a new $265-million (U.S.) factory in Canada.

It comes just weeks after GE said it was expanding a jet engine testing lab in Winnipeg.

GE says both moves are calculated to take advantage of the kind of government-backed export financing that's no longer available in the Unites States, but is still on offer from Export Development Canada, a federal Crown corporation.

Billions of dollars of major international projects hinge on credits and guarantees provided by EDC and 80-plus other national export credit agencies. That kind of financing is often vital for large-scale infrastructure projects, particularly in the developing world – projects that private lenders are often loath to touch.

In the race for foreign contracts, the United States has opted for unilateral disarmament.

With roughly $11-billion in potential deals contingent on government export financing, GE says Congress has left it no choice. In addition to the Canadian moves, the company said it plans to add up to 1,500 new jobs in Europe and China.

"You have to make a choice," GE vice-chairman John Rice explained. "Either bid and make it in a country that has an export credit agency, or you're not going to bid."

GE, which already has a large line of credit with EDC, said it "fully expects to expand its relationship."

EDC's activities are surprisingly uncontroversial in Canada, even though it has a much larger presence in the economy – in part because this country is more reliant on exports. Last year, EDC signed 1,084 new financing deals, worth a record $21.6-billion (Canadian). That's more business than the Ex-Im Bank did in the Unites States.

One out of six of EDC's deals and roughly $5-billion in loans and guarantees went to small and medium-sized businesses – defined by EDC as companies with less than $50-million in annual sales. Its portfolio of loans, guarantees and insurance totals roughly $65-billion.

The U.S. Ex-Im Bank finds itself at the centre of an ideological fight over the role of government in the economy.

Tea Party Republicans in Congress and free market libertarians, including conservative groups funded by billionaire brothers Charles and David Koch, have waged a long campaign to dismantle the Ex-Im Bank. They see the bank as a prime example of crony capitalism and corporate welfare, complaining that its activities crowd out private finance and distort markets.

Delta Airlines, for example, has complained that Ex-Im financing helps foreign carriers, such as Air India and Emirates Airline, buy new Boeing planes, which are then used to compete directly with Delta on key international routes.

Critics say the main beneficiaries of the government's financial help are large multinationals, including GE, Boeing, Caterpillar and Archer-Daniels-Midland. Critics say these companies have ample means to self-finance their foreign operations or secure private funding.

"What they want is for the American public to bear the risk for private companies' profits," Marc Short, president of advocacy group Freedom Partners Chamber of Commerce, argued in a recent commentary in the Los Angeles Times. It and other groups are pushing Congress to keep the Ex-Im Bank's doors closed forever.

That would likely push the likes of Boeing, Caterpillar and GE to move more operations to Canada, Europe or Asia.

But EDC would be unwise to make poaching business from among Ex-Im Bank customers a key part of its strategy. Renewed efforts are already under way in Congress to reinstate the bank's funding. The betting is that Republicans, having made a political stand against corporate welfare, will ultimately relent. 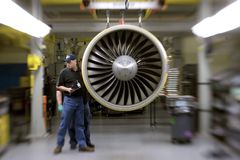