Don't be taken in: While the central bank of the United Arab Emirates stepped in Sunday to support local banks, the party looks to be over in Dubai.

"This recession is exactly what Dubai needed," said Ben Corrigan, one of the survivors of the construction collapse that has plagued this place for a year and led to the news last week that Dubai World, the emirate's development arm, wants to postpone payments on its $59-billion (U.S.) debt for six months.

Some tough economic times "will clean out the cowboys," said Mr. Corrigan, a British interior designer who moved here 12 years ago when things got tough in England.

"Maybe it'll lead to some transparency for a change," said Heather Le Rest, a member of the sailing club, referring to the government's and Dubai World's notorious secrecy. "The people never know what's going on," she said.

Ms. Le Rest's husband, Cedric, manages a marina in Abu Dhabi and commutes 90 minutes daily so the family can live in Dubai. "Life is good here," said Mr. Le Rest, who came from France 10 years ago. "Just let us in on things," said his English wife, who is expecting the couple's third child.

Certainly few people had any inkling of the bombshell the government announced last Wednesday, when it said it was restructuring Dubai World, whose finances have been dragged down by Nakheel, the company's high-flying property development subsidiary. It is Nakheel that is supposed to make a payment of $3.52-billion (U.S.) on Dec. 14.

Typically, the word came at the very end of a statement released late in the day, on the eve of the country's biggest annual holiday.

In the development climate that prevailed in Dubai, accurate information has been a precious commodity.

"It was all a big pyramid scheme," said Chris Waitley, a Canadian surgeon who has been practising here for 10 years. "It had to collapse at some point."

While next-door neighbour Abu Dhabi's wealth rests on oil, and nearby Qatar's on natural gas, Dubai's wealth can be said to be based on hot air.

"Huge new development schemes would just be announced, and they'd take off," said Dr. Waitley, an orthopedic surgeon at a small private hospital. "It got crazy. If you didn't buy some new offering in the morning, it'd be gone in the afternoon. And nothing had even been built," he said.

Mr. Corrigan remembers those days. Over a 12-month period on 2006 and 2007 his design company, Bluehaus, had the contract to outfit Dubai World's corporate offices. "It started out as a contract for four floors of offices," he said. "By the time we finished a year later, the offices had expanded to 10 floors."

The Emir, Sheik Mohammed bin Rashid al Maktoum, based his vision for Dubai's future on the three principles of real estate: location, location, location. His Dubai, he said, would benefit from being close to the great oil wealth of its federal partner Abu Dhabi, from being a crossroads between East and West, and being in an appealing warm climate.

Arguing that if they built it, people would come, he set about planning the infrastructure and importing the work force to make it run. And he did it all on borrowed money.

It worked, for a time. And it was all based simply on confidence.

But as an editorial Friday in the Abu Dhabi newspaper, The National, observed, "Confidence is a fragile commodity."

We know now that last year's world economic meltdown had a big effect on Dubai. But, true to their practices, Dubai and Dubai World kept up appearances.

On the surface of this sprawling city state, things still look okay today. There are dozens of towering new office buildings, including the world's tallest building, scheduled to open next month; sprawling new hotels, including the world's only seven-star establishment; scores of cranes hovering over projects in progress; grand villas and man-made islands in the shape of palm trees.

At the Dubai Mall, the largest of several lavish indoor shopping centres in the city, visitors can skate on an Olympic-sized rink, while hundreds line up to walk through a three-storey aquarium of exotic saltwater fish. (For an additional fee of $200 you can scuba dive through it.)

But look more closely. The half-dozen luxury watch shops in the Dubai Mall are empty, their well-dressed staff looking on sullenly, trying to keep up appearances. Those cranes have remained mostly still for weeks, and the houses around the Greg Norman golf course are mostly empty or unfinished.

An elegant new Metro train rockets through the city, but hardly anyone rides it.

The Dubai Pearl, intended to be the jewel of hotel/office/residential complexes, remains a massive vacant lot long after construction was supposed to have begun.

And Nakheel's most flamboyant project, The World, a cluster of man-made islands that form the map of the world, lies untended four kilometres offshore, its sand islands apparently sliding back into the sea.

At some point in the past decade, Dubai's rulers and Dubai World's executives must have convinced themselves that people will buy anything.

Everything they offered was scooped up within hours, long before it was built.

People bought homes with little or no down payment - why worry, everything's going up in value, lenders must have reasoned. That's when the word "con" became the emphasis in "confident."

When last year's meltdown washed ashore in Dubai, a lot of those over-confident people couldn't make their payments. The value of many properties fell by 50 per cent or more - making them not worth selling, since there was no way the debt could be covered.

In the past year, thousands of these people simply left their debts behind. They walked out of their homes, furniture and all, parked their cars at the airport and flew out of the country, never to return.

The police don't like to talk about it, but thousands of such cars, Land Rovers, Jaguars and all, sit behind the national police academy, hidden behind massive hoardings.

In a statement intended to buoy confidence, Sheik Ahmad bin Saeed al Maktoum, the uncle of Dubai's ruler, the chairman of Emirates airline and of Dubai's Supreme Fiscal Committee, said that a decade of growth had laid the foundation for a sustainable economy that looks beyond natural resources.

"The economic fundamentals, such as our highly developed infrastructure, strong transport and communications hub and regional financial centre will ensure Dubai remains an attractive regional market," he said.

"I think its future is sound," he added as he pushed the stroller carrying his 14-month old daughter past a line of yachts for sale. 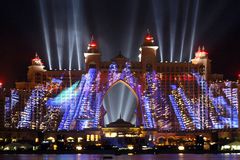 Abu Dhabi to help Dubai - on its own terms
November 28, 2009
Dubai's debt a wild card
November 27, 2009
Follow Patrick Martin on Twitter @globepmartin
Report an error Editorial code of conduct
Due to technical reasons, we have temporarily removed commenting from our articles. We hope to have this fixed soon. Thank you for your patience. If you are looking to give feedback on our new site, please send it along to feedback@globeandmail.com. If you want to write a letter to the editor, please forward to letters@globeandmail.com.
Comments