In the aftermath of the oil shock, a new segment of the economy has been lifting the country on its strong shoulders and carrying it to a different growth path. And it's not the segment that many pundits had anticipated.

When the oil slump hit late last year, most experts anticipated that, in time, there would be a rotation that would lift the economy out of its doldrums, with new leadership taking over from the energy sector to drive the next phase of growth.

Much of that faith was grounded in the export-intensive manufacturing sector, which looked destined to enjoy buoyant demand for its products from the resurgent U.S. economy.

Well, we're seeing a rotation, and a new leader emerging. But it's not manufacturing. No, it's the services sector of the economy that has picked up the ball and run with it.

The services sector – things like wholesale and retail trade, transportation, tourism, financial services, education, health care and government services – accounts for 70 per cent of Canada's economy. And this year, it's accounting for all of the growth, and then some.

Gross domestic product in services for the first eight months of this year (the latest data available) was up 2.2 per cent from the same period last year. In the same time, GDP from the side of the economy that produces goods – primarily natural resources, manufacturing and construction – fell 1.1 per cent. As of October, the services sector has added nearly 240,000 jobs this year; the goods sector has shed 67,000.

Manufacturing, far from taking the lead, has eked out just 0.7-per-cent growth in output, and has added a modest 12,000 jobs. The country has hired more bankers, insurance and real estate professionals than factory workers this year.

If anything, the divergence is becoming even more stark. Last month, the Canadian economy generated a sizzling 44,400 net new jobs. The goods sector created none of them; indeed, goods-producing employment fell by 14,400. The services side cranked out 58,800 jobs in the month.

One contributing factor to services' success may be the oil-related drop in the value of the Canadian dollar. As Bank of Canada Governor Stephen Poloz has pointed out, services exporters get the biggest benefit from a cheap loonie, because they don't have imported inputs in their products, unlike many goods producers who suffer higher input costs owing to the weaker purchasing power of the Canadian dollar.

As of the second quarter (the latest data available), services exports were up a decent 1.4 per cent from the third quarter of last year, which was about the time the loonie went into its swoon in earnest. Over the same time, goods exports were down 1.1 per cent.

But longer-term evidence suggests this isn't just a short-term, currency-juiced phenomenon. Since 2000, services' share of Canadian GDP has risen to 70 per cent from 65 per cent. And while services account for only about 15 per cent of Canada's exports, a recent Conference Board of Canada report showed that services have accounted for three of the four fastest-growing export industries over the past decade, led by financial services. And while non-services employment has barely grown at all over the past quarter-century, services employment has swelled by nearly five million jobs, or more than 50 per cent.

One long-standing concern is that this transition into a more service-oriented economy has contributed to Canada's widening income gap, as high-paying skilled manufacturing and resource jobs are being replaced by low-paid retail staff and fast-food servers. Average weekly wages in the service sector are, indeed, 25-per-cent lower than in the goods-producing sector, weighed down significantly by the relatively low wages in retail, accommodation and food services, which account for nearly a quarter of all service jobs.

But this may be changing. Employment in these low-paying segments has actually declined slightly this year; instead, the job growth has come in relatively high-paying segments such as the financial sector and business, professional, scientific and technical services. Indeed, the Conference Board argues that growth in "tradable services" – the kind that can be easily exported to foreign customers – offer wages 37-per-cent higher than manufacturing jobs.

With Canada looking increasingly at a global disadvantage on the manufacturing side, the expansion of services exports looks to be a natural and healthy transition for an increasingly knowledge-based economy. It leverages some of the country's biggest advantages on the world stage. Perhaps as the country adjusts to the erosion in its resource sector, the ground has been cleared for another sector to emerge.

China’s enigma: Consumers open their wallets as economy falters
May 15, 2018 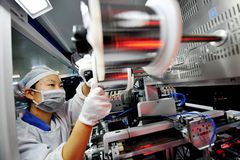 Canada’s economy ‘picking itself up’ as GDP rises for second month
May 15, 2018 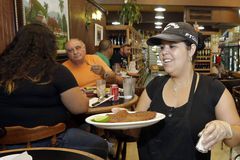