Canada's free-trade deal with Europe has emerged as a sort of Holy Grail for believers.

It is much more than an arcane agreement linking Canada and the 28 countries of the European Union. The Canada-EU Comprehensive Economic and Trade Agreement, or CETA, has become a powerful symbol of open markets in a world of rising protectionism.

For Britain, getting the deal done has become a litmus test of the country's ability to co-operate with its trading partners post-Brexit.

And similarly for the rest of Europe, CETA is a sign that there is life after Brexit. It's also a measure of whether the major powers of Europe can sell a "progressive" free-trade agreement to 500 million Europeans who have turned sharply against globalization.

Unfortunately, more than two years after negotiations wrapped up, the deal still isn't done. There is a final text, including an overhauled investment chapter limiting the ability of companies to sue governments and creating a permanent tribunal to settle disputes between countries and investors. Still pending is ratification by EU trade ministers, the EU council and the European Parliament.

Canada's International Trade Minister Chrystia Freeland now believes the finish line may finally be in sight. EU trade ministers are expected to meet Oct. 18 to approve the deal, clearing the way for Prime Minister Justin Trudeau to head to Brussels for a signing ceremony on Oct. 27.

The next step would be a vote by the European Parliament early in 2017. If approved, most of the deal could take effect immediately, including the elimination of tariffs on a vast array of products. A portion of the deal, deemed to be in the domain of individual EU countries, would be held back, pending approval by the 28 EU states.

For Canada, CETA would be a powerful competitive tool. Parallel trade negotiations between the United States and the EU are stalled, and some European officials are now openly calling for an end to the talks.

With the Trans-Pacific Partnership agreement also facing an uncertain future in the U.S. Congress, CETA's supporters see it as the last great hope for advancing free trade in Europe.

A number of key roadblocks seem to have been cleared to getting the deal done. After intense internal debate, Germany's left-leaning Social Democratic Party endorsed CETA at a meeting in September.

And Canada appears willing to resolve outstanding visa issues with Romania and Bulgaria, who had threatened to hold up CETA.

The last major holdout appears to be Austria, where Chancellor Christian Kern has vowed to block the deal over concerns the deal might challenge the country's ability to regulate. With Austrian elections looming in December, trade has become a major election issue.

CETA's real foe isn't any one country, or issue. It's globalization itself. There is growing skepticism among the public that trade creates jobs or raises wages. In the past two years, popular support for deals such as CETA has plummeted in Europe, ratcheting up the risks for politicians who endorse them. In Austria, for example, some polls have put opposition to CETA at 80 per cent.

CETA's backers insist they have a plan to win over the naysayers, who worry the deal might force privatization of key government assets and give U.S. companies a back door to sue EU governments. Canadian and European officials are working on a joint statement – dubbed an "interpretive declaration" – that would be attached to the deal. The legally binding document would reaffirm that nothing in the agreement undermines national sovereignty, environmental regulations or labour rights.

The strategy is to convince Europeans that the deal with Canada is very different from the massive pact being negotiated with the United States – in part because U.S. negotiators are pushing for much deeper concessions from the EU.

We'll see if it works. CETA's journey has already taken numerous twists and turns in the seven years since negotiations began.

Like the elusive Holy Grail, the quest for CETA goes on. Canadian businesses shouldn't take the deal's potential benefits to the bank just yet. 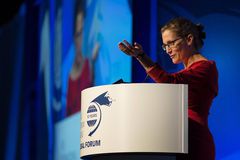