Donald Trump grumbles about what Canada's dairy industry is doing to Americans. But it isn't half as bad as what we're doing to ourselves.

Take cheese, for example. Among the key concessions Ottawa made in its recent free-trade agreement with Europe was to allow more duty-free cheese into this country.

Europe will eventually be allowed to ship almost 18,000 tonnes of additional duty-free cheese to Canada – the equivalent of roughly 2 per cent of Canada's domestic market. The first batches are set to hit the Canadian market this summer with the coming into force of the Canada-European Union comprehensive economic and trade agreement (CETA) on July 1. Imported cheese currently makes up just 5 per cent of the Canadian market, and virtually all of it comes in tariff-free.

For subscribers: Dairy sector likely to be hit hard by NAFTA renegotiations

So you might be thinking: Finally, some relief on the steep price of that tiny wedge of Camembert.

Nothing is ever quite as it seems in Canada's sometimes upside-down world of supply management – the convoluted system that regulates everything to do with milk, chicken and eggs, from farm to fridge.

The Europeans won't get to choose which cheeses we're going to get or at what price. Nor will consumers. That will be up to the Canadian importers that Ottawa arbitrarily picks to bring in the cheese.

The government is poised to start doling out these lucrative permits in the coming weeks. With potential mark-ups of as much as 100 per cent available on the goods, importers have been lobbying furiously to get a piece of the action.

Among the aspiring importers are Canadian dairy farmers and processors, who say all the new import quota should go to domestic cheesemakers because they are the ones most affected by the trade concessions to Europe.

If Ottawa agrees, these new import permits will act as a backdoor subsidy to Canadian processors and, indirectly, to the farmers who sell them milk. That's because some large processors, including Agropur and Gay Lea, are farmer-owned co-operatives.

These subsidies would be on top of the $350-million in support that Ottawa has already pledged to help the dairy sector adjust to the European trade deal.

Canadian cheesemakers wouldn't want to import cheese that competes directly with their own offerings. Why would Agropur, for example, undermine its own Oka sales?

One can imagine other ways Canadian processors might use permits to further their own interests at the expense of consumers or retailers; for instance, import permit holders could, at least temporarily, choose not to bring in any cheese, effectively denying Europe the trade gains it made in CETA.

Not surprisingly, retailers say all the new quota should go to them because only they know what consumers want. Retail Council of Canada vice-president Karl Littler told a parliamentary committee last fall that only retailers can "ensure that the right product is provided to consumers, at the right price." He suggested other industry players might impose unfair mark-ups.

The only thing Ottawa has said – publicly, at least – is that it wants 30 per cent of the new European quota to go to "new entrants" – players who aren't currently importing duty-free cheese.

That has created some unusual business arrangements. A group called the Canadian Alliance of Cheese Makers Inc. is seeking a share of the new quota. Among the directors is Caroline Emond, executive director of the Dairy Farmers of Canada, the national lobby organization for the country's roughly 12,000 dairy farms.

The final call on this will come from federal Trade Minister Francois-Philippe Champagne – or even further up the food chain, given the high stakes.

The government should tread carefully. Dairy farmers and processors already have a pretty firm grip on their industry. Making them import gatekeepers as well would be like putting the fox in charge of the hen house.

It won't help consumers, and it risks enraging Europeans.

And that's before Mr. Trump takes on Canada's merchants of dairy. 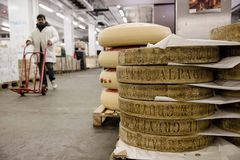 How butter's surge in popularity led to Trump's attack on the Canadian dairy industry
Subscriber content
April 21, 2017
How to craft a successful trade policy in the age of Trump
Subscriber content
April 19, 2017
Follow Barrie McKenna on Twitter @barriemckenna
Report an error Editorial code of conduct
Due to technical reasons, we have temporarily removed commenting from our articles. We hope to have this fixed soon. Thank you for your patience. If you are looking to give feedback on our new site, please send it along to feedback@globeandmail.com. If you want to write a letter to the editor, please forward to letters@globeandmail.com.
Comments