Think of the size of the Canadian economy and then double it; that was roughly the scale of last month's losses on the Chinese stock market. Thursday, after the deluge, the Shanghai and Shenzhen indexes rose about 6 and 4 per cent, respectively, in response to the strong-arm measures of China's regulators. Liquidity injections into brokerages and selling bans on major shareholders are some of the Chinese authorities' desperate efforts to shore up the rotten foundations and fill the $3.5-trillion hole that was suddenly exposed in China's corporate stables.

Such huge losses make the Greek government's debts look trivial and you might wonder why the world is so preoccupied with a small Balkan mishap when a stock market disaster on a par with the Great Wall Street Crash of 1929 is under way in China.

The wisdom accepted by many is that this is indeed a bubble bursting – a necessary correction to a badly regulated capitalist casino. However, the argument goes, it has little or nothing to do with China's real economy. What is at risk are the savings of a relatively small proportion of China's middle class, not the finances of China Inc. It is about the savings of cab drivers and hairdressers, not the balance sheets of banks and insurance companies.

I hear the voice of Pollyanna, urging us to play the "glad game" but I wonder if, indeed, the Chinese market is about to lose its legs. It is true that the Shanghai and Shenzhen exchanges are a playground for Chinese retail investors who account for 80 per cent of the transactions. The staggering losses, about a third off the two main markets, still leave gains of about 80 per cent year on year and only 7 per cent of the Chinese own stocks. It is tempting to believe this is just a storm in a Chinese teacup.

There are two big questions for the outside world, neither of which can be answered as the data are unavailable and that in itself is a large part of the problem.

China's stock market boom was a consequence of government policy – the relaxation of credit that followed the bursting of China's housing bubble. But instead of buying homes, Chinese people looked for the next "get rich quick" idea and played the markets, buying up new issues. Much of the buying has been "margin trading," borrowing from stockbrokers to fund a large part of the stock purchase with the shares as collateral. It is the same kind of leveraged stock investing that led to the 1929 disaster and, according to reports on Bloomberg, Chinese brokerages had extended 2.1 trillion yuan ($339-billion U.S.). by the end of last month to their clients.

But this is only the visible formal lending. There is a whole panoply of grey market lenders operating as wealth management funds that lend money at high interest rates to stock investors. No one seems to know how much is outstanding in this grey stock market lending. The Chinese Securities Association reckons 500 billion yuan but analysts reckon it is trillions.

The point is that China's stock market boom was engineered, in part by the People's Bank of China's loose money policy and by the official media, which encouraged the mad rush to buy stocks. The old men in Beijing seem to believe that a nation full of winners is a happy nation. Hence the government's panicky reaction to the market rout and the extraordinary measures to manipulate a recovery with owners of stakes larger than 5 per cent forbidden to sell and instructions to brokerages to roll over their margin loans to stock investors.

From being a Wild East casino, China's stock markets have been transformed into an Orwellian ministry of equity where "China minishares" always go up and never go down. The worry is whether the government's real fear is about more than a loss of confidence by the Chinese people in their stock market. In other words, is there a Lehman or Bear Stearns out there?

Even the risk of a timid and bruised Chinese consumer is a potential problem for the rest of the world. Beijing's long-term plan has been to shift the economy from an industrial export machine to one where growth derives more from domestic demand for goods and services. We simply don't know what will be the wealth effect of the stock market crash. If retail investors are suffering real losses, their spending will be crimped and it is the expanding consumption of China's new middle class that is needed to create a domestic service economy. China's motor is already slowing down rapidly. Resource economies, such as Australia and Canada, are feeling the pain from China's weakening demand for energy and raw materials in the form of much lower commodity prices.

Few analysts believe that China will achieve its goal of a GDP growth rate of 7 per cent or more this year, and many are expecting 6 per cent or even less. Into this world of uncertainty enters a stock market collapse. Only a true optimist, or perhaps a cynic, could believe that China's badly burned retail investors will rush back into the market and boost the Shanghai index to new heights. Trading in more than 1,500 shares is now suspended; there is no Chinese stock market left, only a government sponsored casino in which not only the game is rigged but permission to play is granted and denied at will. Confidence has been badly damaged and it is anybody's guess what the taxi drivers and hairdressers will now do with their money.

Carl Mortished is a Canadian financial journalist and freelance consultant based in the U.K.

Optimism in Chinese economy a silver lining after selloff
July 8, 2015 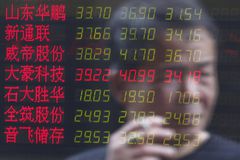