Prime Minister Justin Trudeau is correct that Canada has much to learn from China. It is just not what he thinks we should learn.

His government's pivot to China is clearly shaping up to be a signature policy, showcasing Canada's new attempt to pursue "sunny ways" while at the same time giving our economy a boost by embracing China's economic miracle.

Except that this all comes at a time when China's economic miracle is faltering for reasons that are politically embarrassing for Ottawa: Beijing's ill-advised bet on the stimulative value of infrastructure is unravelling.

Apparently the Liberal Party of Canada is way behind the Communist Party of China in falling under the spell of infrastructure's alleged gravity-defying qualities. Larry Summers, a prominent economist and former president of Harvard, laid out the case for such government spending to a Liberal Party convention a few years ago.

Infrastructure is the economic equivalent of a free lunch, he argued. Sure, you have to borrow to build it. On the other hand, if it is the real deal, new infrastructure lowers costs and improves productivity for businesses and workers by allowing them to do their work more efficiently. The higher business profits, land values, employment and wages that result produce more tax revenue, allowing you to pay off the loans and have more left over.

True, except that most governments ignore the "if" in the previous paragraph. For the lunch to be free, the infrastructure has to be of the genuine productivity-enhancing kind, meaning that before it is built it must pass a stringent cost-benefit test.

China's spectacular growth in recent decades has been premised on the infrastructure stimulus model. But because of the opaque nature of Chinese society, it has been difficult to get credible evidence of whether it has got the cost-benefit equation right, particularly when anecdotal stories of unoccupied office towers and housing developments abound.

Now the evidence is starting to emerge and it is not pretty. A recent paper by Atif Ansar, Bent Flyvbjerg et al, of the Said School of Business in Oxford, looked at a portfolio of Chinese road and rail infrastructure projects on which $65-billion (U.S.) was spent over the last quarter century.

Because these projects had financing from agencies like the World Bank, the researchers were able to determine what productivity improvements these investments were supposed to unlock. But instead of relying on official Chinese government assurances of the resulting benefits, they decided to analyze satellite and other objective data to assess actual traffic.

Based on this data the authors concluded that over half of the infrastructure projects not only did not improve productivity, they actually destroyed value. In other words, they cost more to build than the economic value they contributed to society. A mere six of the nearly 100 projects studied were of the genuine free-lunch variety.

Moreover, as one of the world's leading development economists, Deepak Lal, was warning in 2013, much of this infrastructure was financed using obscure off-balance-sheet, local-government investment vehicles. Projected increases in land values from infrastructure development were leveraged to pay the costs of construction, but instead the spending ended up destroying value.

And while official government figures do not count this borrowing toward China's official debt figures, it is in fact ultimately guaranteed by the Chinese state. The authors of the Said Business School paper argue that if this debt is properly accounted for, China's debt is approaching 200 per cent of GDP, a figure second only to that of Japan.

Leaving aside their affection for gazebos and rinks, politicians are notoriously easy prey to promoters of projects that sound too good to be true, and all too frequently are. That's in part because they spend other people's money, the lines of accountability are blurry and infrastructure is no sure thing but rather inherently risky.

So which lesson you learn from China matters enormously. You might want to emulate the Prime Minister, who once famously admired China as a place where governments can get things done. Or you might want to follow the economists who think getting things done matters less than who does them, for what reason, and what benefit we get from them. 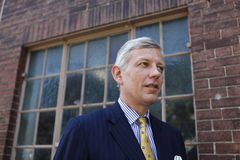 Federal government posts narrow $1-billion deficit in 2015-16
April 3, 2017
Ottawa to spend $55-million over three years on rail safety
April 6, 2017
Follow Brian Lee Crowley on Twitter @brianleecrowley
Report an error Editorial code of conduct
Due to technical reasons, we have temporarily removed commenting from our articles. We hope to have this fixed soon. Thank you for your patience. If you are looking to give feedback on our new site, please send it along to feedback@globeandmail.com. If you want to write a letter to the editor, please forward to letters@globeandmail.com.
Comments