"One Belt, One Road" is China's slogan for a 21st-century revival of the ancient trading routes that linked Han Dynasty silk merchants with Central Asia and the Mediterranean. President Xi Jinping's big idea is investment in roads, railways, ports and pipelines that will link China to the world.

However, the ancient Silk Road was more than a caravan of camels loaded with stuff. It was also a convoy of ideas, and this may be where the Chinese Communist Party's great ambition comes a cropper.

The first question you have to ask is why China needs such a vision of a new Silk Road.

The Chinese President sought to give a romantic gloss to his plan when he first mentioned it in 2013 on a visit to Kazakhstan, noting the thousands of years of trade between the two nations on the Silk Road. Last year, he announced a $40-billion (U.S.) infrastructure fund to build roads, railways, ports and airports across central and south Asia, and this year China reaffirmed its political ties to Pakistan with a promise of $45-billion of infrastructure investment.

The grand strategy is to build a land bridge westward from Xinjiang province and a maritime link from the South China Sea to the Indian Ocean and to the Mediterranean via the Red Sea. Pakistan would be a key piece in the infrastructure puzzle, offering western China access to sea ports in the Indian Ocean.

After decades of industrial expansion and a domestic building boom, China's economy is operating at only half-throttle and it needs to recycle its surpluses into something more worthwhile than low-yielding U.S. T-bills. Efforts to purchase access to valuable resources in Australia, the United States and Canada have largely failed, often in an embarrassing way. Meanwhile, the neighbours in Central Asia have valuable resources (oil, gas, minerals and food), but lack the means to fully exploit their advantage.

This simple industrial logic provides China with a solution to its problems of overcapacity. Yet the full text of the Belt and Road Initiative, published by China's Ministry of Foreign Affairs, insists that this is more than overambitious civil engineering. There is high-flown language about peace, development, co-operation and mutual benefit. Like the Asian Infrastructure Investment Bank, Beijing's attempt to rival the World Bank, the Silk Road project is first and foremost a geopolitical idea. It is an attempt to gather in excess of four billion people under the shelter of a Chinese yurt and to offer more than 60 nations the patronage of a Chinese emperor.

There is no reason why it should not work, or at least do what it says on the tin. Just as the AIIB can support any number of large-scale infrastructure projects, China's new Silk Road can send more rail cars and container ships west. The question is whether it will do more than keep factories humming and create more dollar surpluses.

China is offering its neighbours a very different kind of relationship than the one proposed by U.S. President Barack Obama's Trans-Pacific Partnership. The latter is a vehicle for the U.S. agenda of free trade, economic liberalization, intellectual property rights and the primacy of the private over the state sector. Instead, Beijing is offering a top-down, government-driven heavily capitalized investment program.

It is easy to condemn China's motives as cynical and dismiss its grand plan as imperialistic. That would better describe the efforts of the United States to isolate China in the Pacific Basin and force the Chinese Communist Party down an American highway toward free speech and democracy. Instead, the Silk Road strategy is part of China's attempt to build a bulwark of nations on which it can rely for resources, markets and trade and, in return, bestow patronage in the form of financial capital, know-how and political friendship.

The Silk Road is a historical idea, not a geographical reality. There is not yet a truly compelling need for major infrastructure linking remote cities in western China to Indian Ocean ports. More important, such projects will expose China to the Islamist political ferment in Pakistan and Afghanistan, ideologies that China is violently suppressing in its western provinces.

It was the exchange of ideas, not goods, that made the Silk Road.

Buddhism came to China along the caravan routes. Unfortunately, there is no evidence that Xi Jinping is attracted by the notion of a Silk Road of ideas. Indeed, the superhighway of thought, otherwise known as the Internet, is not yet fully open for business in China. Until that happens, expect to read a lot about bridges to nowhere and railways without trains.

Opinion
Building on a breakthrough year in Canada-China relations
January 11, 2015 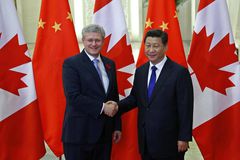