The European Central Bank's decision to both scale back its quantitative easing program and extend it was a clever bit of geo-economic juggling designed to keep all options open as the euro zone economy and inflation rates limp back to life.

The ECB, led by president Mario Draghi, is extending the QE program to the end of December, 2017 – it was to expire in March – but is reducing the program's monthly asset purchases to €60-billion a month from €80-billion, starting in April.

This is having a your cake, though broken into smaller pieces, and eating it over a longer period of time.

The surprising and unusual strategy seems to recognize that QE cannot go on forever, all the more so since generally hawkish German lawmakers, never great fans of QE to begin with, don't see the need for it any more.

After all, the risk of deflation has vanished – Mr. Draghi confirmed that in the ECB's press conference in Frankfurt on Thursday – and growth is creeping back. But, at the same time, inflation is still weak and the economic recovery in some parts of the euro zone, notably Italy, has been virtually non-existent.

Investors had a hard time interpreting the simultaneous QE extension and scale-back. Was it tapering or not? Will the markets get hit with a taper tantrum like the one inspired by the U.S. Federal Reserve in 2013 when it warned that it would get out of the QE game, albeit gradually?

The ECB's decision sparked no violent moves. The euro rose, then lost less than 1 per cent against the U.S. dollar. European bond yields climbed, though not by a lot. European equities continued their good run. The overall reaction lacked drama.

As ING-DiBa economist Carsten Brzeski noted, the ECB's decisions, at first glance, "looked, walked and quacked like tapering." On second glance, Mr. Draghi's insistence that it was nothing of the sort seemed to make sense. This was no Fed-style move. Reducing QE to zero "has not been discussed and is not even on the table," Mr. Draghi said.

QE instead is going back to its original pace of €60-billion a month – it had jumped to €80-billion a month in March, when falling prices were still a clear and present danger – and is being extended by nine months. And it's open ended. If the inflation and growth numbers take a turn for the worse, QE could be extended again and taken back to the full €80-billion a month.

Mr. Draghi said the ECB intended to keep a "sustained presence" in the markets and would buy a broader range of bonds, including bonds with short maturities and those whose yields were less than negative 0.4 per cent, to ensure that is bond-buying menu is always extensive.

The ECB's projections for growth and inflation were essentially unchanged on Thursday over the previous forecast, with "risks tilted to the downside," the ECB said.

The economic interpretation of the lower-for-longer move is no mystery. The euro zone crisis – falling growth and inflation rates – may be gone but the recovery is underwhelming, so best to keep QE in place and open ended.

While the euro zone and is markets took Brexit, the election of Donald Trump and the outcome of Sunday's Italian referendum in stride – all indications that the region is far more resilient to turmoil than it was a few years ago – a lot could still go wrong.

Leading the oh-no list would be collapse of a big Italian bank, with Monte dei Paschi di Siena the most vulnerable to blowing up and spreading contagion, Greece's potential exit from the euro, which is still a big risk, and political chaos in Italy that could see the euro zone's third largest economy drag down whole region.

The good news is that the ECB, by leaving QE largely intact, has keeping its economic insurance policy fully funded. The bad news is that QE, and lots of it, is still needed. The euro zone should have been in a gallop by now; it's in a slow walk. 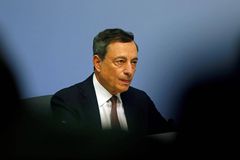