In downshifting its interest rate policy to something barely above neutral, the Federal Reserve is acknowledging two elephants in the room of the U.S. economic recovery. One lies in its suddenly uncertain labour market at home. The other is an unpredictable interloper from an ocean away, who goes by the cartoonish name of Brexit.

The Fed announced Wednesday that its policy-setting Federal Open Market Committee voted unanimously to maintain its key federal funds rate in its current 0.25 to 0.50-per-cent range – in its June meeting that, just a few months ago, looked like a pretty solid bet for another rate hike. Even Kansas City Federal Reserve president Esther George, who for the previous two meetings had stood alone on the committee as favouring an immediate rate hike, has backed down and now prefers to stand pat for the time being.

That says a lot about how much the Fed has cooled on further rate increases since it raised rates last December, in what was supposed to be the start of a long-awaited tightening cycle – and even more about how recent developments at home and abroad have clouded the Fed's vision. The U.S. central bank is going to need to see a couple of things to clear those clouds away. Those are convincing evidence that job growth is back on track, and a vote in Britain's so-called Brexit referendum on June 23 in favour of remaining in the European Union.

The big issue at home, conspicuous in the Fed's five-paragraph rate-decision statement as well as Fed Chair Janet Yellen's news conference that followed, is the recent and profound uncertainty in the U.S. labour market. After being the critical engine driving both the U.S. economic recovery and the Fed's journey to policy tightening for literally years, job creation suddenly stalled last month, at a puny 38,000. For the past two months, U.S. payrolls grew by an average of just 80,000 – less than half of the 200,000-plus it averaged over the previous 12 months.

The slump in hiring followed a winter and early spring in which a lot of things went wrong in the U.S. economy. Manufacturing, consumer spending and business investment also stumbled badly. So while Ms. Yellen talked in her news conference about the possibility of the weak April and downright pathetic May hiring numbers being "aberrations," the economic climate from which they came suggests there may be more truth than statistical anomaly in them.

And while Ms. Yellen talked about optimism that the economy will regain its momentum (and said consumer spending has already done so), the rate decision came on the same day that the U.S. economy showed new evidence of misfiring. Industrial production fell a bigger-than-expected 0.4 per cent in May, driven largely by a decline in manufacturing output, its third in four months.

The Fed's new economic outlook, released along with the rate decision, now projects real gross domestic product growth for this year at just 2 per cent; six months ago, it was forecasting 2.4 per cent. While that's hardly miserable, Ms. Yellen made it clear that the Fed is no longer so sure about the health of the U.S. recovery.

"We need to assure ourselves that the underlying momentum in the economy has not diminished," she said.

But the Fed also needs to be sure that the vote in Britain won't throw a giant spanner into the global economic and financial-market works, bringing the U.S. economy along for what could be a bumpy and unpredictable ride. While the Fed never mentioned Brexit in the rate-decision statement, Ms. Yellen didn't mince words in the press conference: It was a wild card that absolutely influenced the stand-pat decision.

"I think it's fair to say [Brexit] was one of the factors," she said. "It is certainly one of the uncertainties we discussed."

And then later, when asked about the likely pace of interest rates for the rest of the year, she went back to Brexit, saying, "International uncertainties loom large here."

So with the Fed letting the Brexit play out and awaiting new economic confirmation, where does that leave us?

Looking at the Fed's so-called "dot plot," the chart of each FOMC participant's rate expectations for the next several years, the median forecast still points to two quarter-point increases by the end of the year – but just barely. More than one-third of the committee now envisions just one. It's now probably more appropriate to think of it as "one or two."

The bond market looks even less confident. After listening to what Ms. Yellen had to say, by late in the day the market was pricing in almost no chance of a rate increase at the FOMC's next meeting in late July, about a one-in-four chance of a hike in September, and only a 39 per cent chance of any hike at all this year.

Ms. Yellen offered that "it's not impossible" that the Fed could still raise rates at its July or September meetings – hardly a convincing choice of words. Obviously, the Brexit will be out of the way by then, and if Britain votes to stay in the EU, one big obstacle will instantly be gone. After that, Ms. Yellen suggested, the job numbers will have to show a rebound so convincing that they wash away the worries from the paltry May report – though it's unclear how big a number, or for how many months, that will take.

"Clearly we will be looking at the next job report," Ms. Yellen said.

So will we all. 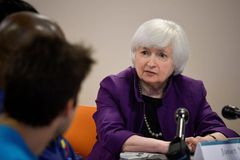