Over the sweep of time, the Canadian and U.S. economies have tended to move in lock-step.

From their currencies to short-term interest-rate prospects, the fortunes of the two close trading partners are seemingly on different tracks. Canada is flirting with recession, while the U.S. recovery appears poised to take off.

The divergence story was on display again as the U.S. Federal Reserve Board moved an important step closer to its first interest-rate hike in more than a decade as it highlighted improvements in the job market.

Fed policymakers voted unanimously Wednesday to leave its benchmark federal funds interest rate unchanged at 0.25 per cent – exactly where it's been since December, 2008. Fed Chair Janet Yellen has said she expects to start raising rates this year, leaving the central bank three remaining scheduled monetary policy meetings in 2015 to do that.

"The labour market continued to improve, with solid job gains and declining unemployment," the Fed said in its statement. "On balance, a range of labour market indicators suggest that underutilization of labour resources has diminished since early this year."

At the same time, the Fed flagged lingering concerns about low inflation.

Many economists still expect the Fed to begin a campaign to end ultra-low rates at its next meeting Sept 17.

"This subtle [gesture] is certainly a baby step toward liftoff," RBC Capital Markets said in a research note.

In Canada, the fallout from the collapse in the price of oil is proving to be deeper and more enduring than many analysts expected, sending business investment plunging and the economy into reverse. Partial readings suggest that gross domestic product shrank in the first half of the year, meeting the traditional litmus test of a recession.

The next rate-setting date for the Canadian central bank is Sept. 9, and financial markets are so far pricing in a roughly 40 per cent chance of another rate cut.

The central bank isn't likely to join the Fed in hiking rates until some time late next year.

The juxtaposition of lower rates in Canada and a weak economy versus growing U.S. optimism has pushed the Canadian dollar sharply lower against the U.S. dollar in recent weeks. It's now trading at slightly more than 77 cents (U.S.), its lowest level in more than 10 years. And many analysts expect it to fall lower still.

The Bank of Canada has been counting on a stronger U.S. demand to start driving exports. The U.S. buys roughly 50 per cent of Canadian exports.

But exports stalled this year, when the U.S. slowed down. Canada was also hit hard by slower growth in China, which has driven down demand and prices for many of the resource-based commodities that dominate its exports to the world, including coal, copper, iron ore and lumber.

The Canadian dollar has lost nearly 15 cents since last summer, a move that should have helped lift exports. But given everything else happening in the global economy, a weaker currency hasn't been enough.

Bank of Canada Governor Stephen Poloz has said earlier this month that he's "puzzled" why exports outside the oil patch haven't been stronger.

In a recent report, economists at CIBC World Markets suggested the dollar could stay weak for some time, and even beyond a return to higher crude prices. They pointed out that some factory capacity was wiped out by the recession, particularly in the auto sector, and hasn't come back. Mexico and other countries have picked up Canada's lost share of the U.S. market.

"A constellation of structural changes suggests … the trade response to currency depreciation will lack its former vigour," economists Avery Shenfeld and Nick Exarhos argued. "A weaker loonie will be here today, and not gone tomorrow."

It may take a sustained low dollar for the Canadian and U.S. economies to start moving in tandem again.

A 65-cent loonie is not out of the question
Subscriber content
July 28, 2015
Canada had weak first 4 months but not in a recession, economists say
July 28, 2015 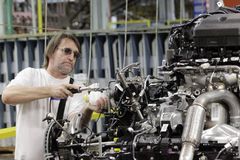