In a just a few short months, the market has done what governments had tried for years to do: secure Canadian energy resources in domestic hands.

Since December, Canadian buyers have snapped up $30-billion worth of oil sands and heavy oil assets. This represents an unprecedented stack of deals at a time when the industry faces weak commodity prices and its old bugbear – high capital costs.

The sellers have one thing in common – they're foreigners. Instead, they came from other countries during boom times, overlooking expensiveness in favour of massive reserves and stable regulatory and political systems compared with other parts of the world. They put their faith in the ability of the industry to slash costs by improving technology.

More than a decade of harsh criticism by global environmental groups did not knock them off course. What did was the collapse in crude prices, anxious lenders and the need to find prospects that offer investors quick returns – such as shale, deep in the heart of Texas.

All the activity has sparked a furious debate about whether Canada has become seen as a lousy place for foreign players to invest large amounts of capital because of government policy, and not just a victim of low energy prices. Either way, it has been a fantastic opportunity to repatriate assets following decades of takeovers by outsiders.

The former explanation is proffered by opponents of Alberta Premier Rachel Notley and Prime Minister Justin Trudeau, who say their moves on carbon, mostly, have driven away capital. This argument is too simplistic, and ignores the fact that executives with companies that have both bought and sold assets have supported tougher emission measures.

The move to reacquire assets at home suggests a new phase in the industry's evolution, one in which the locals have the expertise and patience to run a complicated business even when oil prices stink. Investment decisions won't rely on so many competing corporate priorities. Such is the case with most of the global oil majors.

"Once these things are producing, they're very attractive with long lives and low sustaining capital. These are high free cash flow assets – once they're built," Mr. Waterous told The Globe and Mail after announcing his acquisition. "They're very capital-intensive to build, but once they're on stream they have very compelling economics."

To be sure, all the buying means there will be less building, given those calculations. But that's not necessarily a bad thing, as the economy can pay a steep price with the casualties that come from building too much too fast.

A look back a few decades shows how the government of the day, led by the current Prime Minister's dad, pushed nationalization of energy assets during an era of shortage and suspicion of foreign oil interests.

As a Crown corporation in the 1970s, Petro-Canada was given the mandate to snap up assets and companies and provide "a window" on the industry. It went about buying the likes of Atlantic Richfield Canada, Petrofina Canada and the refining and marketing division of Gulf Canada.

Such pricey protectionism went out of style as crude prices tanked in the 1980s and as government got out of many businesses, including oil, airlines and rail.

Now, though, in a global market saturated with crude, Canadians such as CNRL's Murray Edwards and Cenovus's Brian Ferguson have doubled down on the oil sands to be patient with their main business where others can't or won't. Indeed, another company that once was an affiliate of a U.S. oil major, Suncor Energy, absorbed Petro-Canada in 2009, and lately, has been an enthusiastic consolidator of other oil sands assets.

There could be more big deals yet, but not because of government forcing Canadianization, any more than foreigners fleeing government. Instead, it will be the result of shifting priorities among investors based elsewhere and increasing specialization by the locals. 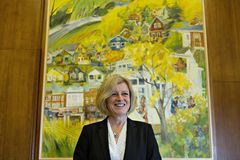