As if stock markets needed something else to worry about, this week marks the start of a fourth-quarter earnings season that could add to the gathering gloom.

Already feeling the pain of low oil prices, China's economic and market stumble and rising geopolitical tensions in the Middle East, investors will have to contend with what will undoubtedly be some depressing earnings reports over the next several weeks, particularly in the hard-hit energy and materials sectors.

Alcoa Inc. kicks things off after the close on Monday, when the aluminum giant is expected to report revenue of $5.2-billion (U.S.) and earnings per share of 4 cents in the quarter, down sharply from revenue of $6.4-billion and earnings of 33 cents a share a year earlier.

Alcoa has struggled amid a protracted slump in aluminum prices and its current earnings estimate is just one-third of what analysts were expecting, on average, three months ago, according to Zacks Investment Research.

Investors will also be looking for an update on Alcoa's plan to split into two publicly traded companies – one focused on its traditional smelting and refining operations and the other a higher-growth business that supplies products to the automotive and aerospace industries. The split is expected to be completed in the second half of the year.

Chip maker Intel Corp. is on deck after the close on Thursday, followed on Friday morning by Wells Fargo & Co. and Citigroup Inc. Among Canadian companies, Shaw Communications Inc. – fresh from its recent $1.6-billion (Canadian) agreement to acquire Wind Mobile Corp. – is expected to release fiscal first-quarter results for the period ended Nov. 30 on Thursday morning.

S&P 500 earnings releases will pick up the following week, with 44 issuers expected to report, climbing to 115 the week after that and then peaking at 142 companies for the week beginning on Feb. 1.

On the whole, analysts are expecting a gloomy earnings season.

Based on analyst estimates for the fourth quarter, S&P 500 companies are expected to report a 4.7-per-cent drop in total year-over-year earnings. It would mark the third-consecutive quarterly earnings decline for the S&P 500, something that hasn't happened since earnings fell in the first three quarters of 2009, according to FactSet Research.

Based on recent trends, the actual decline could be worse than the current forecast indicates.

Analysts have been steadily lowering their earnings estimates in recent months. On Sept. 30, the expected earnings decline for the S&P 500 was just 0.6 per cent, but analysts have since cut estimates for nine of the 10 S&P sectors, with materials suffering the biggest estimate reductions, FactSet said.

Materials earnings are now expected to tumble 25.1 per cent – second only to the energy sector, where earnings are seen plunging 66.3 per cent.

"As has been the practice in recent quarters, the overwhelmingly negative tone of company guidance drove down expectations for the quarter," Sheraz Mian, director of research for Zacks, said in a report. "But the magnitude of negative revisions that [fourth-quarter] estimates suffered is bigger than what we saw in other recent quarters."

Zacks estimates that fourth-quarter S&P 500 earnings will drop 7.3 per cent over all while revenues will fall 4.6 per cent. "A big part of the explanation comes from the energy sector, with oil prices making a fresh move down since October 1st," Mr. Mian said, adding that a strong U.S. dollar and global growth worries are also exerting downward pressure on earnings estimates.

Among economic reports, Monday features data on Canadian housing starts and the Bank of Canada's business outlook survey. Economists at CIBC World Markets are expecting an annualized 190,000 housing starts for December, which would be down from 212,000 in November but still a solid number, supported by low interest rates and mild weather.

In the United States, Friday brings several reports, including retail sales, industrial production and the producer price index, all for December.

"While the U.S. consumer is expected to provide underlying support for the U.S. economy in 2016, it doesn't appear that spending ended 2015 on good footing," Royce Mendes, senior economist with CIBC, said in a research note.

"Headline retail sales likely faltered with auto sales being held back by lower-than-expected volume sales and price discounting that has lasted longer than in past years."

Why I’m looking for buying opportunities in this market turmoil
Subscriber content
January 7, 2016 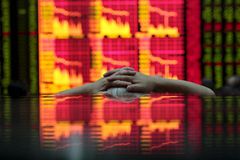