It's time for the U.S. labour market to undergo its monthly checkup – a procedure that also provides insights into the broader health of the world's largest economy.

First, the good news: Economists believe that the data for March, due at the end of this week, will show that the United States added roughly 200,000 jobs and that the unemployment rate remained unchanged at 4.9 per cent.

Those are respectable figures and follow on the heels of a string of strong reports: Between October and February, only one month posted job growth of less than 240,000.

The relative strength of the job market will give impetus to policy makers who believe that the U.S. Federal Reserve should return to its stated goal of raising interest rates sooner rather than later.

Last week, Fed Governor James Bullard gave a speech in which he noted the improvement in the job market between December and March. While the Fed decided to hold off raising rates at its March meeting, the next hike "might not be far off, provided the economy evolves as expected," Mr. Bullard said on March 24.

"Not far off," in Fed speak, could mean either April or June, when the central bank's policy-making committee will hold meetings. Should Friday's report be more robust than anticipated – either with better job creation or lower unemployment – then the odds of a move by the Fed in April will rise.

The strength of the recent employment reports has helped to calm rattled nerves among investors, who had begun to question the durability of U.S. economic growth as China slowed and oil prices tumbled.

"Folks are a little more comfortable with where the U.S. economy is right now," said Mark Vitner, a senior economist at Wells Fargo & Co. "How bad could things be if we're adding 240,000 jobs a month?"

Of course, underlying issues remain. The chief one is that nearly seven years after the end of the recession, the job market still has not fully recovered its prior vigour. For instance, the proportion of adults participating in the labour force remains well below where it was in 2007. That's partly because baby boomers are retiring. But it's also because some people have dropped out of the job market, too discouraged to even look for work.

What's more, the number of people who are working less than they would like to – in part-time jobs instead of in full-time ones – also remains higher than before the recession. And wage growth is relatively muted, given how far the unemployment rate has fallen.

"We're not seeing very much, if any, acceleration in the improvement in nominal wages," said Gary Burtless, a labour economist at the Brookings Institution in Washington. "And the gains we've seen in real wages have been mostly driven by the fact that the inflation rate has gone down, because energy is so much cheaper."

If the recent streak of robust job creation has bolstered confidence in the state of the economy, the performance of the U.S. manufacturing sector has been a source of distinct discomfort. On Friday, the same day as the jobs report, the Institute for Supply Manufacturing will release its closely watched gauge of activity for the month of March. The index is expected to rise above 50 – signalling expansion, rather than contraction – for the first time since September.

Earlier in the week, economists will get a look at the latest data on consumer confidence, also a critical part of the puzzle as the Fed weighs its next move. Economists are expecting a bump up from the prior month in the figures for March, which will be released on Tuesday. 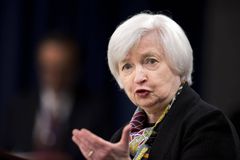