Central bankers have been known to pull surprises out of their hats on occasion, stunning pundits and punters alike with unexpected policy changes.

Bank of Canada Governor Stephen Poloz did just that with an interest rate cut in January, 2015, which prompted some observers to warn that he was putting the bank's credibility at risk.

Janet Yellen, the cautious chief of the U.S. Federal Reserve, has shown no such inclination toward shock or awe. But she would prefer that the markets stop looking for specific guidance about what the world's most powerful central bank may or may not do on the policy front.

"What is certain is that monetary policy is not on a preset course," she told a business audience in Philadelphia last week.

Ms. Yellen remained modestly upbeat about U.S. economic prospects, even in the wake of the worst monthly job report since 2010. But she also underscored uncertainties about the health of domestic demand, China's difficult economic rebalancing act and the repercussions that could flow from the Brexit vote June 23 as the "leave" side gains momentum.

She repeated her view that the federal funds rate "will probably need to rise gradually over time to ensure price stability and maximum sustainable employment in the longer run."

But faced with the foreign and domestic threats to the economic outlook, it seems a safe bet that the Fed's policy-setting committee will keep the benchmark rate unchanged when its latest two-day gathering wraps up on Wednesday.

In fact, the odds of a hike have plunged to less than 4 per cent, based on a gauge of market sentiment linked to trading in 30-day federal funds futures contracts. In the days before the release of the gloomy May employment data – only 38,000 jobs created, compared with a consensus forecast of 155,000 – the chances of a modest rate increase were pegged at better than 20 per cent.

"The meeting has become somewhat anticlimactic in the wake of the non-farm payrolls reports for April and May that showed a marked deterioration in the pace of job growth," Bank of Nova Scotia economist Derek Holt said in a note to clients. Until "the issue of trend job growth has been settled – and it might take a couple of months of payrolls data or more to do so – it is unlikely that the Fed will be comfortable with raising rates."

Futures traders expect no more than one small rate bump this year, while the economists' consensus still calls for two quarter-percentage-point increases, which would take the benchmark to 1 per cent.

Some analysts argue that the Fed has already missed its best chance to return monetary policy to something closer to normal and that conditions aren't likely to support tightening in the months ahead.

"There was a window to go [to higher rates] in the second half of 2014 and throughout all of 2015," said Rick Rieder, chief investment officer of global fixed income at BlackRock.

If the Fed had taken the benchmark to 1 per cent at the time, it "wouldn't have created any negative influence. In fact, with the global economy reasonably stable, you had a better window to do it," Mr. Rieder said in an interview.

Job numbers are notoriously volatile, so the grim May results may not be a signal of worse to come. But Mr. Rieder is convinced the days of strong U.S. employment growth, with annual gains exceeding two million jobs in each of the past three years, may already be in the rear-view mirror.

"I think we've seen the best in terms of employment," he said, citing a depleted labour pool and weaker corporate earnings.

Capital spending, inventory levels and employment numbers tend to fall about six months after companies begin showing signs of deterioration in their top and bottom lines. As companies tighten their purse strings, the only way to stimulate growth is through a hefty dose of fiscal stimulus, Mr. Rieder said.

Still, he expects one small hike from the Fed this year, likely in September, after which the ball could be tossed back to the reluctant hands of a lame-duck Congress.

"I think that there's a realization that monetary policy is exhausted, and that just resting on the shoulders [of the Fed] is not going to be effective going forward." 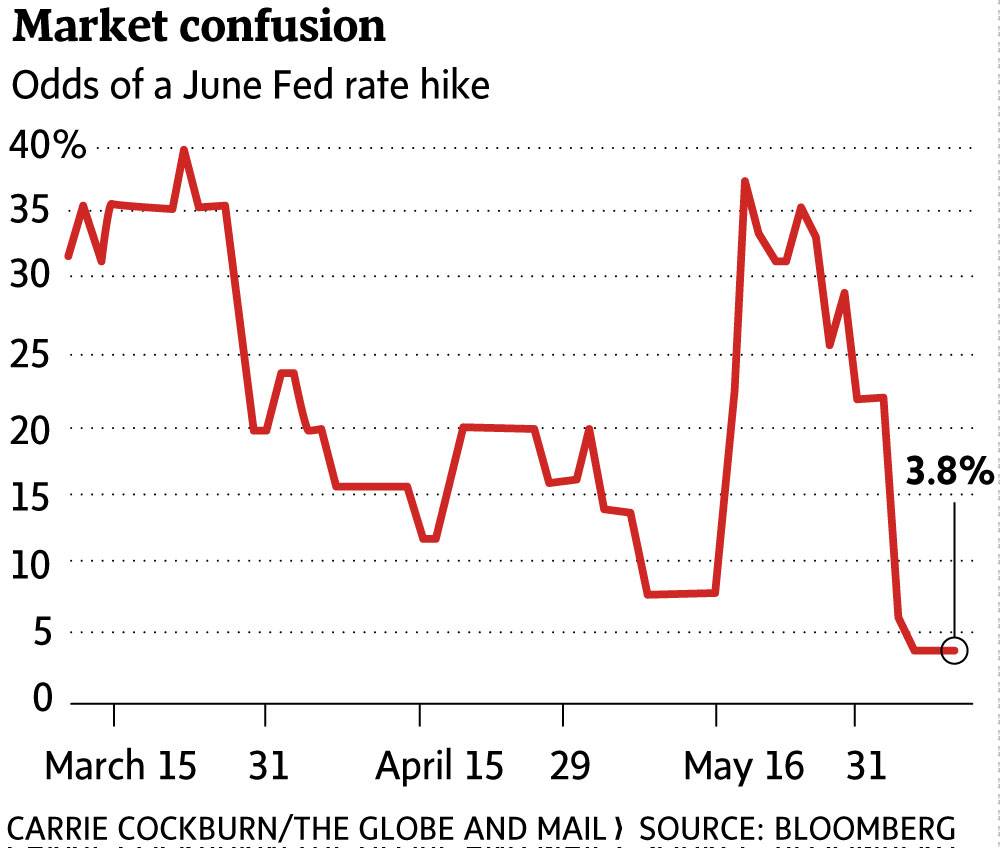