Statscan told us that Canada's labour market added a very impressive 44,000 jobs last month, the second strong month in a row, much better than the small decline most economists had anticipated. But in the very next breath, it pointed out that it was all because of a 67,000-job surge in part-time work; higher-value full-time employment actually fell by 23,000 jobs. All quantity but no quality, the critics cried.

But hold the phone: It was all because of one massive shipment from South Korea – a nearly $3-billion piece of platform for the Hebron offshore oil project – which caused a freak spike in imports for the month. Outside of that, the trade deficit was actually quite mild by recent standards – but only because imports performed even worse than generally tepid exports.

If these were supposed to help us reach a verdict on the Canadian economy's state in the final quarter of the year, we're left with a hung jury. Which, frankly, sounds about right.

What these two economic releases illustrate is an economy that, having slumped in the spring amid the Alberta wildfires only to bounce back strongly from that temporary slowdown in the summer, has come out the other side in limbo. It's still transitioning away from resources, and that transition remains fitful. Wherever we see numbers that seem to scream momentum, the exclamation points are often followed by question marks.

There was certainly plenty to like in the employment report. A gain of 44,000 jobs, regardless of the specifics, is impressive, especially coming off September's eyebrow-raising 67,000-job gain that had many economists anticipating a modest slide in the October numbers. Businesses are hiring: Private-sector employment grew by 34,000 last month.

But the continued growth in part-time work, at the expense of full-time employment, has become a serious concern. In the past four months, the Canadian economy has added a whopping 165,000 part-time jobs – but has lost 60,000 full-time positions. The recent strong job growth may be masking a simmering underemployment problem in the labour force – and that may help to explain the persistent weakness in consumer demand in recent months.

As for the trade report, the record deficit most certainly overstated the weaknesses; the broader trend looks to have turned the corner from the downright alarming slowdown earlier in the year. If not for the Hebron shipment, September's trade deficit would have been the smallest since January. Exports grew 5 per cent in the third quarter, or a breakneck rate of 20 per cent on an annualized basis. Energy exports have recovered to their highest level in a year, good news for a battered sector.

But non-energy exports, which were supposed to lead the way to a healthy Canadian recovery, have fallen by 5 per cent in the year to date, and they slipped another 0.2 per cent in September, continuing to show a troubling lack of traction despite the renewed upward momentum in the U.S. economy, by far the biggest market for Canadian goods. And imports, the big Hebron platform delivery aside, have also lost ground this year, indicative of stagnant demand here at home.

All this unevenness and equivocation in the numbers is indicative of the erratic, unspectacular growth of an economy that is still far from firing on all cylinders. The third-quarter growth pace, estimated at something north of 3 per cent annualized by economists, is misleading, a short-term reacceleration from the second-quarter slowdown. All it has achieved is a return to what passes for normal – where the growth pace is lucky to scratch out a meagre 2 per cent, and occasional setbacks may still be par for the course.

If you want to say the latest numbers are cause for cautious optimism about the course for the fourth quarter and into 2017, fair enough. But you'll want a considerable emphasis on the "cautious" side of that equation. 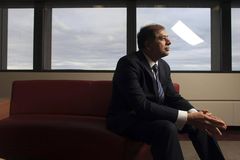