Analyst Martin King gave an energy market update to a standing-room-only audience of oil and gas executives and white-collar workers at Calgary's Petroleum Club Tuesday. Attendees joked whether the large crowd was a result of intense industry interest in the forecast or the free hot breakfast.

The main message of Mr. King's presentation – which he subtitled Staring into the Abyss (Highway to Hell) – was that there can't be significant price improvement until U.S. crude inventories fall and supplies drop further.

But he also commented on the particularly gloomy January for the industry – oil prices have fallen to 13-year lows with no letup in sight – and the effect that might have on the psyche of the market.

"The sentiment has just become so negative in the last two weeks. It's overwhelmed everything," Mr. King told reporters.

What a difference three months makes. Last October, when the price for the benchmark West Texas intermediate (WTI) was hovering around $50 (U.S.) a barrel, some analysts, Mr. King included, predicted the oil market might have hit a bumpy bottom. With prices now less than $30, that $50 sounds like a small fortune for a barrel of crude.

On Tuesday, Mr. King noted that there are broad worries about the Chinese economy, interest rates and the performance of equities. On an inflation-adjusted basis, prices are at their lowest since 1999. Members of the Organization of Petroleum Exporting Countries are prepared to keep producing vast quantities of oil to reclaim their dominance in the market, "for years, if necessary," according to his report.

How low can it go is the question everyone is tired of asking.

"Never before have I seen a market where any sort of political risks are uniformly ignored," FirstEnergy chief executive officer John Chambers weighed in, listing off security and economic threats ranging from the Islamic State in the Middle East to Venezuela teetering toward bankruptcy.

"Once upon a not-too-distant time ago, we used to routinely talk about a $10 political risk premium in the price of oil – not the fact that that was going to be the price of oil," Mr. Chambers joked, eliciting little laughter.

FirstEnergy is forecasting that the WTI price of oil will not go above $33 a barrel for the first half of this year, and will average $36.75 in 2016 (in contrast, on Monday, JPMorgan Chase & Co. predicted a slower recovery, with WTI averaging $31.50 this year). FirstEnergy said oil might hit $50 again by the first quarter of 2017.

Mr. King said that for there to be any recovery in the price, U.S. inventories and supplies need to drop, China needs to show some positive economic signals and new Iranian output needs to be taken up by the market.

Despite the news Tuesday that small oil sands producer Connacher Oil and Gas Ltd. is responding to low prices by slashing its Great Divide oil sands output, Mr. King added that he doesn't expect any material oil sands shut-ins to take place in the near term.

"They may be losing money on every barrel, but these companies are not going to shut in. It's too complex, it's too expensive up front, and then it's even more expensive on the back end – if you did shut in – to restart these operations."

Mr. King said that, eventually, price signals will work, and oil – as well as natural gas – supplies will decrease and demand will improve.

"At some point you will start to get a rebalancing of this market," he said. 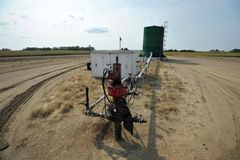 Oil prices have cratered. Gas pump prices, not so much
January 13, 2016 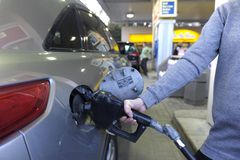