Conservative leadership candidate Kevin O'Leary is getting bad press for his apparently heretical view that Ottawa might use its power to get provinces to pursue (in his view) sensible economic policies. Particular ire has been reserved for his idea that transfers from Ottawa might be withheld from provinces that don't follow the O'Leary script.

Harrumphing commentators opine that this is not how we do things in Canada, and that Mr. O'Leary clearly doesn't understand the Constitution, federal-provincial relations, provincial sovereignty, the second law of thermodynamics and possibly quantum computing. Subtext: he must be an idiot.

For all I know he may be, although I suspect not. But if he is, it is not because he defends the idea that a powerful federal government was always at the centre of our founders' vision for the country. One of the chief justifications for that power was that the new nation needed a centre with legitimacy that spoke for the entire country, overcoming the parochial navel-gazing of the provinces, especially on economic matters.

One former prime minister, when faced with the obdurate foot-dragging of the provinces, famously asked, "Who speaks for Canada?" The Constitution eloquently replies: "There shall be one parliament for Canada."

And that parliament and the governments to which it gives rise were endowed with myriad powers designed to underline its central economic vocation, such as the trade and commerce clause, the common market clause and the ability to unilaterally designate any infrastructure as federal because it benefited Canada as a whole. Even the general philosophy behind the difference in powers given to provinces and Ottawa speaks volumes. Ottawa is there to provide for the "peace, order and good government" of the country. By contrast, the provinces were given jurisdiction over "all matters of a merely local or private nature."

Out of this weak hand and a lot of political belligerence, the provinces – with Ottawa's shameful connivance – have now brought us to the point where we look to them, not Ottawa, to remove the barriers they have created to free trade within the country. Premiers arrogate to themselves the right to approve pipelines that fall under federal jurisdiction, and one former (federalist) premier of Quebec can dismiss Ottawa as basically an irrelevant relic.

So not only is there plenty of constitutional ammunition for Mr. O'Leary to draw on in asserting a leadership role for Ottawa on the economy, his call to look at other pressure points than federal legislative power is also entirely defensible.

Many of the same people who find Mr. O'Leary's idea of withholding federal transfers from provinces over economic policy disagreements risible are the very people who leap to the barricades to defend Ottawa's unilateral right – nay, duty – to withhold those very transfers should a province dare to contravene the Canada Health Act. Yet health care is indubitably a provincial jurisdiction, while the power to create and sustain a national economy that generates national prosperity properly belongs in Ottawa.

Remember that, bar equalization, nothing in the Constitution requires Ottawa to transfer money to the provinces, and even the language on equalization gives the feds huge latitude on the size and design of the program. Yes, recent practice has allowed provinces to escape federal conditions on new transfers and get the money anyway, but who made this holy writ? Our attempts to write it into the Constitution have consistently failed. It is no victory for federalism or the economy that we therefore sneak it in the back door.

Suppose, then, that an O'Leary government is elected promising to make deep tax cuts to stimulate the economy, but the provinces simply raise their taxes by a similar amount. It has happened before, turning federal tax cuts into unintended increases in transfers to the provinces. Mr. O'Leary's critics would have you believe that despite Ottawa voluntarily giving the provinces, on average, one out of every five dollars they spend each year, it is inconceivable that he might use that money as leverage to rein in their bad behaviour.

Or suppose that Ottawa finds many provincial and municipal policies are causing the supply of new housing to dry up, contributing to a bubble and closing off access to the middle class for many. Should Ottawa just ignore the fact that the provinces are clamouring for billions in federal infrastructure and "affordable housing" funding which might be used in part to reward those that support sensible housing policies and – heaven forfend – punish those whose policies harm Canadians?

Mr. O'Leary's tone, of course, is another matter. Perhaps it is not helpful to attack individual premiers or ruminate about "coercing" the provinces. That probably runs counter to one half of what is arguably the winning formula in herding the provinces toward better economic policy: speak softly. But the other half? Carry a big stick. 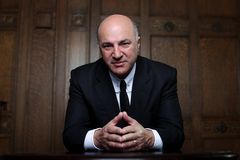