In that year, the Chrétien Liberals swept out of office a decade-old Tory regime whose legacy they despised. Yet sometimes governments you detest nonetheless do things that are in the national interest. That presented the Chrétien Liberals with the dilemma of what to do about the North American Free Trade Agreement their predecessors had negotiated with the U.S. and Mexico.

Chrétien squared that circle by declaring he would renegotiate the agreement, but found that no one showed up from the other two countries for such talks. Having satisfied honour with token resistance, he quietly let the deal go forward.

Fast forward to 2016. The Trudeau Liberals have swept aside the Harper Conservatives, who had just completed the negotiations for the Trans-Pacific Partnership, a trade deal among 12 Pacific-basin nations. This time the Grits were cannier politically – during the election they declared themselves pro-free trade and said that once in office they would study the TPP and decide what to do on its merits.

Now, however, the election's over, and the new government clearly wants to have its cake and eat it too. On one hand it wants to be seen as favouring trade and market diversification. On the other it doesn't want to cheer a Harper achievement. And the Liberals want any disaffected sectors (like, say, autos or supply management) to blame the Tories, not them.

Ottawa's strategy, led by International Trade Minister Chrystia Freeland, is to ask Canadians to give them reasons to approve the TPP because, gosh, they are not sure they should like this deal. Thus Ms. Freeland announced, for example, that while she would sign it at a ceremony in New Zealand, this was by no means an endorsement of the TPP.

Uh-uh. No way we are approving this, said she. This is a purely technical requirement, she intoned, looking all the while like a bad smell was wafting up from the document she had just signed.

Hence we now get "consultations" so that, the government hopes, those who benefit from the deal will speak loudest and the government can then say that Canadians told them to sign.

If that's what they want, I for one am happy to oblige. In addition to the usual benefits of freer trade, there are two main arguments in favour of TPP, each of which is sufficient in its own right. Together they make a compelling case why Canada would be foolish to miss the TPP boat.

The first reason is our relationship with the U.S. Everyone knows it is our biggest trading partner, taking more than two-thirds of our exports, and we negotiated free trade with the U.S. in the 1980s because we couldn't afford to have such a foundational relationship subject to unilateral politicking by Washington.

If this argument passes you buy, I have three things to say: Buy America, softwood lumber and Keystone XL. These are all examples of how trade issues not governed by NAFTA can be manipulated by U.S. politics to harm Canadian interests.

Many believe that our relationship with the U.S. is already fully covered by NAFTA, but no: NAFTA is incomplete and outdated, and TPP offers a chance to modernise its provisions in a way we and Mexico would not obtain on our own.

Here are just a few examples of TPP improvements over NAFTA, according to international trade expert Larry Herman. Canada gets much-better-than-NAFTA access to lucrative U.S. markets such as government procurement and financial services; a whole series of protections for e-commerce (something not even touched on in NAFTA); and new intellectual property protection rules that benefit Canadian creative industries such as music, software and publishing. The fact that we gain access to other TPP signatories' markets too – such as Japan's – is just icing on the cake.

The second reason to embrace TPP is China. China was not part of the TPP negotiations for a very good reason. The market-oriented nations of the Pacific wanted to set the rules for regional trade before China became so powerful it could dictate them unilaterally. TPP now creates a huge trading bloc China will want to join, and it will have to accept the rules pretty much as they are. Canada's interests would be far better protected by working with its TPP partners to entice China into the tent than attempting to negotiate a Canada-China deal in which we would be the weaker party.

The Chrétien Liberals chose the national interest over partisan squabbling on trade. We are about to find out if the Trudeau Liberals can pass the same test. 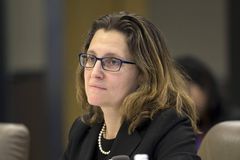 Canada to agree to terms of TPP but ratification not guaranteed: minister
January 25, 2016