The Globe and Mail's David Parkinson wrote Wednesday that the latest trade numbers put Bank of Canada Governor Stephen Poloz in a spot. Indeed. The figures are terrible – some might even say atrocious. The central bank's forecasts for economic growth are beginning to look optimistic – that could prompt a change in monetary policy.

But why is it always the central bank that is "in a spot" when the going gets tough?

The answer, of course, is that politicians in Canada and almost everywhere else in the industrialized world essentially have abdicated responsibility for post-crisis economic policy to men and women such as Mr. Poloz and Janet Yellen, the head of the U.S. Federal Reserve. Leaders and lawmakers have done so little to boost their economies in recent years that we've subconsciously given up on them, concentrating instead on the people who at least are trying to do something positive – the central bankers.

Let's stick to Canada. And let's pretend we live in a world where we expect more from our elected representatives than cynical election ploys and facile policy rationalizations (I know, I know; but I said we are pretending). In this land of make believe, it is not Mr. Poloz who is on the spot at all. He has done his part. The Bank of Canada ignored calls to raise interest rates, characterizing the threat posed from expanding asset-price bubbles as theoretical. Mr. Poloz then cut interest rates in January, calling it insurance to cover all the bad things that could happen as the result of the collapse in oil prices. Mr. Poloz has done enough – maybe even too much.

Canada's politicians, on the other hand, have a lot for which to answer. Most have done the equivalent of nothing to help the economy lately, putting their fetish for balanced budgets ahead of responsive policy making.

The recovery from the financial crisis has been painfully slow for two reasons. One is private debt, which has weighed on households' propensity to spend. The other is that governments have contributed almost nothing to gross domestic product since before the crisis.

Remember the 2010 Toronto G20 Summit? Canadian Prime Minister Stephen Harper used his influence as chairman to get the Group of 20 to endorse a pledge to quickly reduce budget deficits and pay debt. In retrospect, it was a bad idea. Mr. Harper and the G20 mistakenly assumed that the passing of the storm meant things would get back to normal. But the sun refused to shine. Private demand remained weak, forcing central banks to get ever more creative. Most governments carried on as if nothing was the matter. They restrained spending, exacerbating the situation.

Back to Canada. The country's politicians accept no blame for the poor state of the economy. For many, this spring was a moment of triumph, for – in the face of that devastating oil shock – the federal government and some provincial ones were able to keep their budgets in check.

Here is Finance Minister Joe Oliver earlier this week via the Canadian Press: "Had we not been in a relatively strong fiscal situation, the impact [from the oil slump] would've been even more severe and we were able to avoid draconian steps, or, really, austerity."

Mr. Oliver isn't talking about the economy. He is talking about his government's pledge to balance the budget this year, reducing the finance minister's job to that of an accountant. There is nothing to applaud in the federal government's achievement because the accomplishment is meritless.

New research by a team of economists at the International Monetary Fund led to the conclusion that unless a country is under pressure from its creditors, policy makers should focus on economic growth, not arbitrary debt reduction. What matters is the point at which investors start to doubt a country's ability to manage its debt load, not a balanced budget or any other arbitrarily chosen fiscal target. This is called "fiscal space," and Canada has plenty of it.

The problem is bigger than Mr. Oliver. British Columbia Premier Christy Clark oversees the strongest provincial economy in Canada, yet she insisted on a budget surplus, needless limiting demand that might have helped some of Canada's more heavily indebted provinces. The federal opposition also make a priority of balancing the budget, diminishing their credibility to accuse Mr. Harper of mismanaging the economy. Unless they pledge to throw off the chains of gratuitous fiscal restraint, Thomas Mulcair and Justin Trudeau could do no better.

So Mr. Parkinson was correct. Mr. Poloz is in a spot. Canada's economy is in trouble and the Bank of Canada has been abandoned by everyone who could help him do something about it. 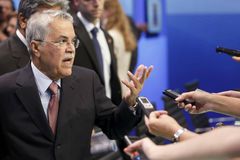 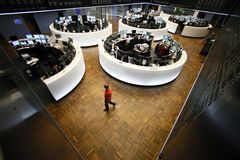