Far be it for us to rain on le mini-boom that Quebec's economy has been enjoying – Mother Nature has done quite enough of that this summer – but a deepening labour shortage risks putting the brakes on the province's long-awaited expansion before it even reaches a healthy cruising speed.

Four decades of below-average population growth will do that. Without measures to increase the supply and quality of labour, Quebec risks choking off a mini-boom that is helping it catch up to its richer Canadian cousins.

There were cheers all around when Statistics Canada reported that Quebec's unemployment rate fell to 5.8 per cent in July, the lowest level recorded by the federal agency since it began compiling comparable data in 1976. The employment rate among Quebeckers between the ages of 25 and 54 hit a jaw-dropping 84.2 per cent in the first seven months of 2017, compared with 81.6 per cent in Ontario and 82.3 per cent for all of Canada. Many economists believe Quebec is at or near full employment, given the structure of the province's job market.

The signs of an economic renaissance are especially evident in the Montreal region, which has been responsible for 85 per cent of all recent job creation in the province. The condo cranes and omnipresent (if maddening for commuters) infrastructure projects suggest a city in the throes of an extreme makeover. Swarms of tourists and tech-industry-employed millennials round off the rosy picture.

Behind those impressive sights, however, lie some worrying trends. A declining working-age population, a tendency among Quebeckers to retire earlier than other Canadians and higher barriers to employment faced by new immigrants risk forcing companies to put local expansion plans on ice or pursue growth outside the province.

"It's clear that the conversation has changed in Quebec," noted Jean-Guy Côté, associate director of the Institut du Québec think tank. "We're no longer talking about job creation. We're talking about a labour shortage."

The main reason lies in the province's demographics. Quebec's population has grown more slowly than the rest of Canada's since the 1970s, and the province has seen its share of the Canadian population slip to 23.2 per cent in 2016 from 28.9 per cent in 1966. The number of Quebeckers in their prime working years (ages 15 to 64) has actually been shrinking since 2014.

"Declining demographics in the province are exerting additional downward pressure on the unemployment rate. This is a structural rather than a situational factor, and it will not change in coming years," Desjardins economist Hélène Bégin concluded in a recent note.

A contracting public sector actually took some pressure off a tightening labour market in the three years through the end of 2016 as the provincial government worked to get its fiscal house in order. But since the government began loosening the purse strings, public-sector employment has surged while private-sector job creation has stalled. Fully 66,000 of the 124,000 jobs created in the province in the 12 months ending in July were in the public sector.

Private-sector firms cite a shortage of labour as the biggest challenge they currently face, according to surveys commissioned by the Conseil du patronat du Québec employers' group. It has called for more government help for training and job-placement services.

Longer-term measures are also needed. Of the 15 major North American metropolitan regions included in a recent Institut du Québec study, Montreal placed 14th in the proportion of the population with a bachelor's degree or higher. Toronto came 10th. Montreal was dead last when it came to integrating new immigrants into the work force.

Mr. Côté and others advocate easier and faster recognition of diplomas earned outside Canada. Meanwhile, the provincial government recently began implementing new immigrant-selection criteria that are better aligned with labour-market needs. (Unlike other provinces, Quebec chooses its own immigrants under a 40-year-old federal-provincial agreement.)

Still, Quebeckers on average retire a year earlier – at 62 – than Canadians as a whole, the provincial government noted this year as it began consultations on the future of the Quebec Pension Plan. In 2014, only 25 per cent of men between the ages of 65 and 69 were still in the work force in Quebec, compared with 32.4 per cent of men in that age group across Canada and 36 per cent in the United States. Only 16 per cent of Quebec women in that age group were still in the job market, compared with more than 20 per cent of all Canadian women and 27 per cent of American women.

Quebeckers can begin collecting QPP pensions at age 60, and the government is contemplating raising the minimum eligibility age. That's tough politically. But without it and other measures, le mini-boom may soon go le bust. 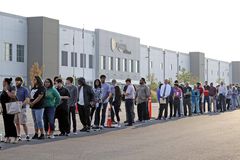 Consumer sentiment soars as Canadians shrug off rate increases
August 8, 2017
Canada's wage growth weak despite strong job creation
Subscriber content
August 4, 2017
Follow Konrad Yakabuski on Twitter @konradyakabuski
Report an error Editorial code of conduct
Due to technical reasons, we have temporarily removed commenting from our articles. We hope to have this fixed soon. Thank you for your patience. If you are looking to give feedback on our new site, please send it along to feedback@globeandmail.com. If you want to write a letter to the editor, please forward to letters@globeandmail.com.
Comments