Canadian cities are clearly struggling with the Uber dilemma.

Should they ban the ride-hailing service or embrace it?

Finding a happy and workable balance between taxi-industry grievances, passenger safety and consumer choice is proving to be elusive. The trail of protests, injunctions and class-action lawsuits in Uber's wake are testament to this epic struggle.

New research points to a powerful new argument in the debate that could tilt public policy in favour of Uber and other ride-hailing services. Put simply: Uber is the green choice for cities, and the planet.

Green, it turns, out is a byproduct of efficiency when it comes to ride hailing.

Highly restrictive taxi-licensing regimes and outdated technology have created an industry that is inherently wasteful. The result is that taxis spend significantly more time and more kilometres driving empty than do Uber drivers. A working paper by economists Judd Cramer and Alan Krueger for the U.S. National Bureau of Economic Research compares the capacity utilization rate for taxis and UberX drivers in five of the largest ride-hailing markets in the U.S. – Boston, Los Angeles, New York, San Francisco and Seattle. (Capacity utilization measures how well installed productive capacity is actually used.) The rate is 30 per cent higher for UberX, based on driving time, and 50 per cent higher, based on miles, according to the study.

The authors point to several reasons Uber is more efficient, including its superior technology, a more flexible labour force and the controversial practice of surge pricing during periods of peak demand.

It also means lower carbon emissions and fewer cars on the road. Inefficiency, on the other hand, means taxis are responsible for "greater traffic congestion and wasteful fuel consumption," according to the paper.

Ride hailing is also changing peoples' behaviour, breaking Americans' love affair with the car. Users of services such as Uber and Lyft are more likely to walk and take public transit and less likely to own a car and drive to work, according to a survey of 4,500 ride-hailing users in seven U.S. cities by the American Public Transit Association (APTA). More than one-fifth of ride-hailing users said "using Uber and Lyft is a gateway to a car-lite lifestyle," according to the APTA.

"The ability to conveniently request, track and pay for trips via mobile devices is changing the way people get around and interact with cities."

It's not as if regulators did not already have strong incentives to legalize Uber and reform restrictive taxi laws. For policy makers still sitting on the fence, this research should push them over the edge – to go for accommodation over confrontation.

If allowed to thrive, ride sharing and ride hailing have the potential to transform urban transportation, making cities cleaner, less congested and more livable in the process.

More efficient vehicle use means we'll eventually need fewer of them. And fewer cars will push people to use shared transportation, ride a bike or walk to get where they're going. That, in turn, reduces demand for roads, parking and other costly and scarce car infrastructure.

Embracing Uber also dovetails nicely with efforts by many Canadian cities to encourage more people to live in the downtown core – so-called urban intensification. Downtown dwellers are less likely to need cars to get to work during the day, but they may need rides on evenings or weekends for shopping and entertainment. Legalizing ride-hailing services makes urban living an easier choice.

Various cities and provinces have already moved to legalize the ride-hailing industry, including Edmonton and Calgary. Toronto, Ottawa, Vancouver and other jurisdictions are either considering changes to taxi regulation or studying a path to legalization.

But Uber is getting a more hostile reception elsewhere, including in Quebec, where the provincial government is considering stiffer fines against unlicensed drivers. The union representing thousands of Montreal cab drivers is mounting a class-action lawsuit.

If cities are serious about slowing climate change, sensible ride-hailing regulation should be part of the mix. They may well find that doing so generates more immediate and tangible climate benefits than, say, opposing oil and gas pipelines.

Green may be an unintended but welcome offshoot of Uber's emergence.

In Uber fight, taxi drivers on wrong side of history – and consumerism
December 11, 2015 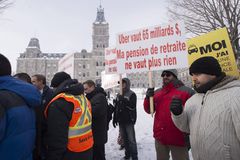