Looking at Statistics Canada's five-yearly census statistics is kind of like looking at the candles on your birthday cake. It is no secret we are getting older, but this puts the uncomfortably big numbers in unavoidably bright lights.

The national statistical agency has rolled out its report on age- and sex-related components of the 2016 census, and it confirmed that Canada's population is rushing headlong into senior citizenship, a function of the huge baby-boomer generation passing the traditional retirement age of 65 in ever-growing numbers. In just five years, the number of 65-plus Canadians swelled by a gaudy 20 per cent.

We are still closer to the beginning of this demographic tidal wave than the end. Statscan reminds us the rapid aging of the population is forecast to continue until about 2031. The data raise so many economic policy issues it's hard to know where to start. But looking at Statscan's report, these are a few that jump out.

Statscan made a big deal about the age breakdown in the census crossing an unprecedented threshold: For the first time in our country's history, it shows we have more seniors (age 65 and older) than kids (age 14 and under). But the bigger issue, from an economic perspective, is that the working-age population (15-64), on which we rely to support all those seniors and children, grew a scant 2 per cent over five years.

This puny increase is a significant drag on the overall economy's potential to grow, helping explain, at least in part, the below-normal growth trend in gross domestic product in the post-Great Recession era. Typically, about two-thirds of the expansion of Canada's economic output can be attributed to labour-force growth.

The good news is that an increasing number of seniors are continuing to work past the traditional retirement age. Employment in the 65-plus category has doubled in the past decade, to more than 750,000.

The so-called "prime" working-age population, those from 25 to 54, has been growing a bit faster than the overall working-age count: Up 3 per cent in five years. This may reflect the benefits of Canada's substantial immigration program, which now imports about 300,000 people into the Canadian economy annually. Statscan noted in its census report that "most immigrants arriving in Canada are in their 30s," meaning that the increase in immigration levels in recent years is generally adding to the labour count in the prime working years.

Who are you calling 'old'?

A quarter-century ago, the number of Canadians at the age of 65 and over represented about 11 per cent of the population, and Canada's average life expectancy was about 78 years. Today, both the proportion of people over 65 (nearly 17 per cent) and the average life expectancy (north of 82) are much higher. Frankly, 65 is not as "old" as it used to be.

Researchers Robert L. Brown and Shantel Aris suggested something along these lines in a paper published by the C.D. Howe Institute last month. They propose linking eligibility for the Canada Pension Plan and other government old-age benefits to the average life expectancy – so as the country's life expectancy rises, so, too, would the eligibility age for retirement payouts. Such a plan would serve both to keep more of the over-65 population in the work force longer, and to ease the growing demographic pressures on taxpayers and government finances.

The Harper government tried to address this in its 2012 budget with a plan to raise the age for Old Age Security gradually to 67 from 65, beginning in 2023. Justin Trudeau's government cancelled the plan in its first budget in the spring of 2016, making good on an election promise. For the sake of votes, the government turned a blind eye to the demographic red ink on the wall.

In the country's 35 biggest urban centres, the 65-plus age group makes up less than 16 per cent of the population, compared with 20 per cent in the country's smaller towns and rural areas. Nearly 27 per cent of those city populations are age 15-34, compared with 22 per cent outside of the big cities. While that reflects a migration of younger workers toward the big urban economic centres that offer the best range of education and employment opportunities, it also speaks to a dismaying hollowing out of small-town and rural Canada, which has only been accelerated by the broader aging trend.

The numbers also show the hollowing effects of regional migration: The Atlantic provinces – where census figures released earlier in the year showed that population growth essentially stalled over the past five years – have a bigger proportion of seniors in their population than anywhere in the country, and the sharpest decline in working-age population.

Immigration might offer an avenue of relief – although to date, it has been part of the problem, with the vast bulk of immigrants gravitating to Canada's biggest cities. The federal government earlier this year launched a pilot program aimed at attracting and retaining more skilled immigrants to Atlantic Canada – providing an early test case for trying to inject new demographic life into these economies. 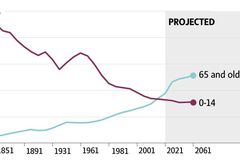 Why you can thank multiculturalism for Canada's strong population growth
May 3, 2017
Follow David Parkinson on Twitter @ParkinsonGlobe
Report an error Editorial code of conduct
Due to technical reasons, we have temporarily removed commenting from our articles. We hope to have this fixed soon. Thank you for your patience. If you are looking to give feedback on our new site, please send it along to feedback@globeandmail.com. If you want to write a letter to the editor, please forward to letters@globeandmail.com.
Comments