Beware what you wish for, Mr. Trump.

On Labour Day, Donald Trump, then a long shot for the White House, now president-elect, decried ultralow interest rates. They have created a "false economy," the Orange One bellowed, and that "at some point, the rates are going to have to change."

Related (suscribers only): Why Donald Trump's win is a boon for Canadian bank investors

U.S. bond yields began to rise last week as bond prices fell, raising the cost of government financing. The bond rout continued on Monday and turned global. Why? Because bond investors are betting that Mr. Trump's pledge to stimulate the economy through deficit spending and protectionism will trigger inflation and inflation is generally bad news for bondholders.

The irony is that Mr. Trump needs cheap money to fund his lavish spending program and deliver his promised 5 per cent to 6 per cent American growth, about double the current rate. The bond vigilantes' message: You can borrow all the money you want, Donald, but you're no longer gonna get that debt at clearance-sale prices.

The dollar rose on the prospect of higher rates, pushing the euro down to $1.07 (U.S.), wiping out all of the gains against the dollar it had made over the past year. The yen was also weaker.

The question is whether the yield rise will stop here or whether it's just the first upward jolt in a series of upward jolts. And if yields keep rising, how long can the stock and real estate markets remain insulated from the bond rout?

Mr. Trump loves debt. He built his casino and hotel empire on debt (a strategy that did not always work, as several bankruptcy filings have shown). He wants to use debt to fill the low-growth holes in the U.S. economy. While his economic plan lacks details, he has pledged to spend $1-trillion to rebuild America's clapped-out infrastructure. He wants to boost military spending and reduce personal and corporate tax rates. The latter would fall to 15 per cent from 35 per cent, making the United States, in effect, a low-tax haven. Deficits would soar.

The big spending plans have spooked bond investors, who evidently think the long era of low interest rates and benign inflation might be coming to an end. Estimates made by the Committee for a Responsible Federal Budget say that Mr. Trump's economic plan, such as it is, would push the United States debt load to 105 per cent of gross domestic product, up from 75 per cent. That would be substantially higher than the average debt in the euro zone, home of the "debt crisis," which was about 90 per cent at last count. When debt loads reach 100 per cent of GDP, economic growth becomes impaired, as Italy has learned.

Some economists were warning months ago that the extraordinarily long bond market rally was about to get into trouble. They said so even before they had any inkling that Mr. Trump and his fiscal stimulus machine would roll into Washington.

The bond rally has its roots in the high-inflation era of the 1970s. To kill inflation, president Jimmy Carter unleashed Paul Volcker, chairman of the U.S. Federal Reserve. In the "Saturday night massacre" of Oct. 6, 1979, the Fed boosted the discount rate to 13 per cent. Not long later, interest and inflation rates began their downward journey and bond values rose. Since 1982, annual bond returns have averaged about 8.5 per cent.

In the euro zone, European Central Bank interest rates are now zero or negative and inflation is nowhere near the 2-per-cent target rate, in spite of a lavish quantitative easing program designed to stoke inflation.

But what happens if inflation comes creeping back, which it appears to be doing? "Perhaps the most interesting scenario is the case where the central banks simply hit their [inflation] targets," Balazs Csullag, Jon Danielsson and Robert Macrae wrote last June on the Voxeu.org economists' site. "A rational buy-and-hold investor who trusts the central banks should not buy long-dated bonds."

Mr. Trump has awakened the bond vigilantes. They can be nasty. In 1994, they battled president Bill Clinton and won. In his first term, Mr. Clinton wanted to boost spending and implement a middle-class tax cut. Investor worries about high spending sent U.S. 10-year yields above 8 per cent and Mr. Clinton was forced to dilute his domestic economic agenda.

The U.S. economy under Mr. Trump could be entering a danger zone. If rates continue to rise, the newbie president might be forced to scale back his stimulus plans. At the same time, the stock market would not be supported by a stimulated economy or record-low interest rates. Trouble lies ahead. 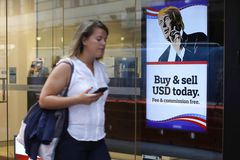 Top Links: Sell-off in bonds, dividend stocks intensifies
Subscriber content
November 14, 2016
Follow Eric Reguly on Twitter @ereguly
Report an error Editorial code of conduct
Due to technical reasons, we have temporarily removed commenting from our articles. We hope to have this fixed soon. Thank you for your patience. If you are looking to give feedback on our new site, please send it along to feedback@globeandmail.com. If you want to write a letter to the editor, please forward to letters@globeandmail.com.
Comments