New U.S. President Donald Trump has promised to do many things to make America great again. Some of these promises have major economic flaws with negative consequences, and his ongoing comments are adding to uncertainty. What are the major risks, and opportunities, for Canada from the Trump economic agenda?

The starting point for 2017 is solid. The Conference Board of Canada believes the Canadian outlook has strengthened. We expect the implosion in oil-sector investment to end, foresee a modest recovery in commodity prices and improved export growth. Taken together, these factors mean Canadian growth will pick up to 1.9 per cent in 2017. The U.S. outlook is also solid, based on current policies. But the status quo is about to change.

The most important priorities for Canada are trade, fiscal and monetary policy, energy and pipelines, and immigration. Changes to oversight of financial services may benefit Canada in the near term, although relaxation of regulatory oversight could recreate longer-term systemic risks.

Read more: Could Trumponomics lead to a U.S. recession? (subscribers)

Read more: Greatest jobs producer ever? Trump has some work to do

Trade policy is the top area for concern because of Mr. Trump's campaign promise to tear up the North American free-trade agreement (NAFTA) and his threat to impose a border tax on imports. Any arbitrary U.S. trade action would of course put Canadian economic interests at risk.

While Canada has the Canada-U.S. free-trade agreement as a fallback position if NAFTA wobbles, the strongest argument against arbitrary action by the Trump Administration is Canada-U.S. trade integration. Over many decades, extensive cross-border value chains have been built, notably in the manufacturing sector. For example, many light vehicles assembled in Canada have high levels of parts and other inputs imported from the United States. An import tax on autos assembled in Canada would in effect be a tax on related U.S. exports, which makes little policy sense. The Trump Administration risks shooting itself – and its constituents – in the foot if it acts arbitrarily toward Canada on trade policy.

It now appears the election promise is transforming into a desire to renegotiate NAFTA, which ought to be a two-way street. Canada would have an opportunity to demonstrate the advantages of North American trade integration, and to advance its interests in items such as more openness to services trade, and reducing non-tariff barriers.

On fiscal policy, Mr. Trump promised simultaneously to slash taxes, spend much more on infrastructure and defence, and balance the federal budget – which is not possible. Deep U.S. tax cuts and higher infrastructure spending could add a bit of short-term economic stimulus to the American economy, which would be good for Canadian exports. But larger annual U.S. fiscal deficits and much more public debt would eventually eat away at confidence.

When combined with tightening U.S. labour markets and possible border taxes, expansionary fiscal policy would fuel inflation and a faster increase in U.S. interest rates, with further upward pressure on the greenback. Canada would face multiple macroeconomic policy challenges, including whether to meet reductions in U.S. tax rates for business and individuals, and maintaining an independent monetary policy if economic conditions diverge widely.

On energy and pipelines, Mr. Trump said he would provide quick approval for the Keystone XL pipeline. But he also mused about greater benefits for the United States from its approval. More broadly, his protectionist attitudes could end up affecting the energy sector, most likely through unconstrained support for expanded U.S. domestic energy production. That scenario could crowd out expanded Canadian energy sales into the U.S. market. Improving access to global energy markets through new pipelines would then become all the more important for the Canadian energy sector.

The United States will take action to deter illegal immigration, even if mass deportations do not occur. However, population and labour force growth are key factors in maintaining strong underlying economic-growth potential, so anti-immigration policies would not be good for long-term U.S. economic growth. The historic U.S. brand as a magnet for people to fuel its economy has already been affected.

None of us know what the Trump economic agenda will look like in detail, but it is bound to be challenging. If Canada is to avoid getting caught in the crossfire, nimble and responsive policy design and action will be much required in the months and years ahead. 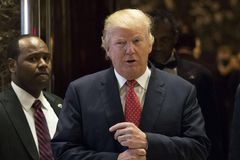