There is much about Donald Trump that Americans are skeptical about, including his fitness to be President.

Mr. Trump enters the White House with the lowest approval rating of any incoming U.S. president in nearly four decades.

But when it comes to putting America first and bringing jobs back to Middle America, the U.S. people are fully on board with their bullying and erratic President. And they will inevitably hold him to the central "America first" pledge of Friday's inaugural speech.

"Every decision on trade, on taxes, on immigration, on foreign affairs, will be made to benefit American workers and American families," he vowed. "We must protect our borders from the ravages of other countries making our products, stealing our companies and destroying our jobs."

Read more: Why Trump should fear the mighty U.S. dollar

That's bad news for Canada. And it could doom Ottawa's efforts to persuade the Trump team to spare this country from proposed border taxes and other protectionist measures.

Americans aren't convinced Mr. Trump has it right – on such things as scrapping Obamacare, building a wall with Mexico or backtracking on climate commitments, according to a CNN/ORC International poll released this week.

But they apparently like what he's been saying on jobs, and their expectations that he'll produce results are sky high. Strong majorities of respondents in the CNN/ORC poll endorse his plan to create middle-class jobs, renegotiate the North American free-trade agreement and punish companies that move offshore.

These ideas are more popular than Mr. Trump himself, who earned just 46 per cent of the popular vote in November (two percentage-points less than Hillary Clinton). His current approval ratings are even lower – in the mid-30-per-cent range.

It's why overhauling NAFTA – apparently to make it more favourable to U.S. workers – is now at the top of Mr. Trump's to-do list.

This all makes Canada's appeal for reason a hard sell in Washington.

Ottawa has mounted a concerted outreach to the new administration, based on the notion that punishing Canada could rebound on the United States because of the integrated nature of the two economies. Among other things, Canadian officials are making the case that greater protectionism puts at risk U.S. jobs, U.S.-based supply chains and billions of dollars in Canadian-bound exports.

It's a familiar playbook. Canada has made similar arguments every time the U.S. has erected new trade barriers in recent years, including Buy America restrictions, tariffs on softwood lumber and onerous beef-labelling rules.

And while the Liberals acknowledge that their agenda of higher carbon taxes, free trade and more immigration may be at odds with Mr. Trump's policies, they are making extraordinary efforts to find common ground. Prime Minister Justin Trudeau pointed out this week that he and Mr. Trump share an interest in improving the lot of the middle class.

"We continue to work constructively with the new administration to protect middle-class jobs and opportunities on both sides of the border, because quite frankly it is a commitment that both president-elect Trump and I got elected on," Mr. Trudeau told reporters during a stop in Sherbrooke.

"We both got elected on different platforms, but with a core idea that we needed to support the middle class and the good jobs that people need to support their families across the continent."

Ottawa has a good story to tell on the trade side. Canada is the largest purchaser of U.S. goods in the world, typically running a small surplus with the United States. Measured by the broader current account, which includes trade in services and investment income, Canada and the United States are in near-perfect balance.

As Bank of Canada Governor Stephen Poloz pointed out this week: Inhibiting trade inflicts pain on both ends of the transaction.

"Pulling back on trade is a negative-sum game," Mr. Poloz told reporters Wednesday in Ottawa. "You reduce income, and not just on one side of the border."

Since the last recession, Canada's trade competitiveness in the United States has been badly eroded. We've lost market share in the U.S. across a wide range of export categories, particularly in manufacturing.

So if the U.S. is losing out on trade, it's not because of anything Canada is doing. Quite the opposite.

But talking reason and sound economics won't be enough if the other side isn't listening.

The Trump team has made it clear that putting U.S. workers and manufacturers first will guide everything they do.

By definition, that leaves everyone else, including Canada's middle class, in second place, or worse.

Could Trumponomics lead to a U.S. recession? Subscriber content
January 5, 2017
Canada in the year of Trump: A guide to what happened
November 10, 2016 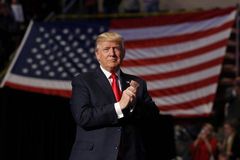